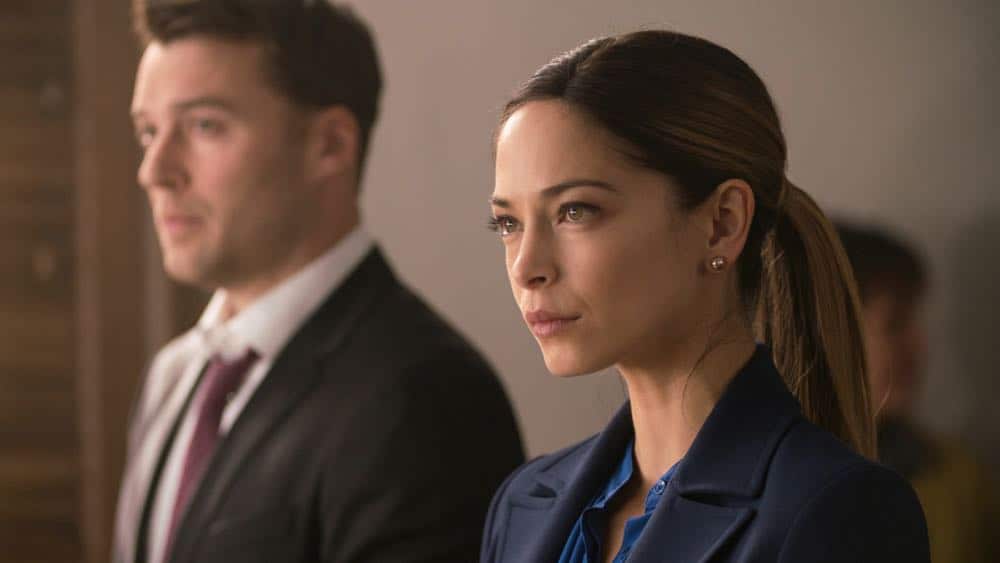 The CW drama series BURDEN OF TRUTH is a legal drama that provides a stark look at corporate malfeasance as the show focuses on a small town where a number of the high school students develop neurological problems attributed to a contaminated water source. Starring Kristin Kreuk and Peter Mooney, who portray former high school friends that reunite years later as lawyers on the opposite sides of the legal case, BURDEN OF TRUTH focuses on the simmering lies and deceit buried deep beneath a town intent on protecting its secrets. Kristen Kreuk is Joanna Hanley, now a big city attorney working for her father’s firm retained to make sure its industrial clients are not implicated in any toxic tort claim that may arise; whereas Peter Mooney co-stars as Billy Crawford, local attorney with a personal stake in the case as his teen niece Molly (Sara Thompson) is one of the high schoolers affected by the contaminated water.

As BURDEN OF TRUTH slowly reveals the extent of the water contamination and the subsequent investigation into its source and who may be responsible for it, Joanna and Billy’s interests begin to align as their desire for the truth supersedes protecting any of the potentially liable businesses implicated. Seeing the teens affected puts a face on the tragedy before them — these are teenagers who simply went to school each day and never knew that their lives were at risk. Facing a potentially life-threatening and life-long neurological effects, the high schoolers of Millwood were never meant to be harmed; yet they were. Literally, the lives of children were sacrificed due to pure corporate greed.

Determined to hold those responsible for the diabolical and grossly negligent corporate actions, Billy and Joanna tenaciously pursue the truth and justice for Molly and those similarly affected by the toxic spill. But as each clue leads them closer and closer to those ultimately responsible, Peter and Joanna find themselves in the crosshairs of companies who will do anything to keep their illegal activities from ever being known. With a bullseye on their backs and the lives of the innocent at risk, they will need to move quickly to preserve the evidence and keep the proper chain of custody intact to establish who is ultimately responsible for the water contamination.

With time not on their side as the evidence seems to slip farther and farther away and due to the legal roadblocks thrown up to keep them from finding out who is really behind the water contamination, it is a race to prove their case and to keep everyone alive during the investigation. The law maybe blind, but they are not and it will become clear who is the culprit and who is going to pay for a crime that was never intended to be discovered.

In an interview, star Peter Mooney talked about what Season 1 of BURDEN OF TRUTH holds in store. Peter said that it is Billy’s devotion and love for his niece Molly that really drives him to pursue both justice and find a cure for her. Having been a father-figure throughout her entire life, Billy is close to his niece and is driven to help her. Similarly, co-star Meegwun Fairbrother, who portrays one of the local police officers Owen Beckbie, has a vested interest as well as Owen’s step-daughter Luna (Star Slade). Luna, while not affected by the contaminated water, is Molly’s girlfriend who volunteers to work with Joanna and Billy in their investigation. Peter fondly recalled that during filming BURDEN OF TRUTH that Meegwun showed him how to throw knives to help pass time between scenes. In addition, the fact that their characters Billy and Owen are father-figures who only want to protect and help Molly and Luna, gave them and their characters a common bond in pursing the ultimately responsible companies. Just like a mother will do anything to protect her children, so will a father. Joanna’s legal interest is more of a sympathy for those affected as well as make a name for herself along the way, but for Billy and Owen, this is personal; and they are going to make someone pay. Another cool aspect of working on this series for Peter was the fact that it is not simply a courtroom drama. BURDEN OF TRUTH is a legal thriller, but it is more of an in the field investigation into the “who” and “why” with nail-biting stakes along the way. The pursuit of truth is only half the story — the other half is justice.

BURDEN OF TRUTH offers a finely tuned and taught tale of truth and justice — albeit as seen though the lens of two attorneys and a local police officer who see that a crime has been committed and for the sake of all, someone must pay. So while the guilty will ultimately be revealed, but at what cost along the way?

BURDEN OF TRUTH premieres Wednesday, July 25th at 8:00 p.m. on the CW. The 10-episode first season will air this summer and Season 2 is currently in production and presumably will air next summer on the CW as well.