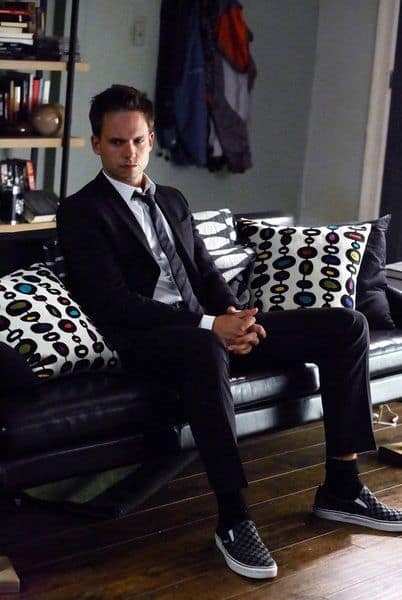 USA’s SUITS returns this week with “Blind-Sided.” Hardman’s name is being scraped off the office door, and that chapter of the firm’s ugly history is over. So everything is now copacetic. Or is it?

The following does not ruin the ending of the episode, but does contain major spoilers, as it is pretty difficult to talk about the series without mentioning what is going on. You have been warned.

Louis (Rick Hoffman) is excited by the return of Sheila Sazs (Rachael Harris). Not only is she there for Louis sexually, but she also has a business prospect for him – an associate named Maria Monroe that he can hire for himself, now that he’s a senior partner.

But Jessica (Gina Torres) shuts Louis down, shaming Louis, the little power he now has ripped from his grasp, made even worse when Jessica’s excuse, that they are in a hiring freeze, is proven immediately false as Harvey (Gabriel Macht) hires a new associate of his own. It’s incredibly frustrating for Louis, and it definitely hurts things with Sheila. Does Louis really deserve to be treated like this?

More than that, is it dangerous to the firm for Jessica to act this way? Jessica’s motivations might not be vindictive, but she is fine with Louis believing that they are, and that could prove to be a problem for her down the road, should Louis ever find someone else to side against Jessica with. Jessica’s overconfidence may be her undoing, believing that she can handle anyone that threatens her position.

The real purpose behind Jessica’s act, of course, is to protect Mike (Patrick J Adams). Maria is a force to be reckoned with, as is immediately obvious, and Donna (Sarah Rafferty) tells Harvey, who in turns tells Jessica, that Mike’s secret will be threatened by Maria’s presence. If word gets out that Mike isn’t actually a lawyer, it could threaten the whole firm. Mike’s secret is the gift that keeps on giving, to paraphrase a quote from the show.

Unfortunately, in “Blind-Sided,” Mike is beset by personal issues, and is not earning his keep. Jessica isn’t happy that she has to bend over backwards in the first place for Mike, but because Harvey thinks Mike is worth it, she usually does. Now, with even Harvey tired of Mike’s shenanigans, how much time does Mike have before he is kicked to the curb? He doesn’t seem the sort that would blackmail Jessica and Harvey to keep his job, so if he stops being useful, he could easily be gone.

“Blind-Sided” sees Mike at his worst. Not only has it been just one short week since his grandmother’s death, which he is still dealing with, but he’s continuing his affair with a married woman, Tess (Elisabeth Hower), is back to smoking pot, and memories of his parents’ death are dredged up by the case he works on. We have never seen Mike this erratic, and while there is definitely still sympathy to be felt for the guy, we need our heroes to overcome their obstacles, not allow themselves to take the low road, as Mike is doing.

Can Mike get himself back on the right path before it’s too late?

Harvey also crosses a line in this episode, engaging in bribery to help the case. This is in stark contrast to the soft, warm side of Harvey we see during his date with Zoe (Jacinda Barrett) earlier in the hour. So which is the real Harvey? Is he ready to open himself up and settle down? Or is he still someone who will do whatever it takes to win in court?

Both Harvey and Mike do right and do wrong in “Blind-Sided,” and yet, Harvey comes off as a good guy, while Mike is painted as bad. No matter how much Mike insists, there is no strict right or wrong, and circumstances color viewers’ opinions. What SUITS doesn’t show is just as important as what it does, a subtlety that makes the rich layers of the installment all the more memorable.

That’s why SUITS continues to be USA’s best show. What happens on the surface, and the dialogue delivered, do not tell the whole story. Instead, we get these brilliant characters whose decisions affect others, not just themselves, and who won’t always agree on the course of action. Their complicated chemistries and interactions build on one another to make this a smart serial, not a common lawyer procedural.

There’s also a fair amount of romance tossed in, with Mike still on shaky ground with Rachel (Meghan Markle), who claims to not be the goody-goody she comes across as, and Harvey and Louis’s affections for Zoe and Sheila, respectively. “Blind-Sided” allows all of the main guys to tend to matters of the heart, but also reveals that they can’t necessarily control how these things play out, a nice, realistic touch. When will it be the ladies in the cast’s turn to get wooed?

The trademark charm and witty dialogue that have become a hallmark of SUITS continue, with great one-liners delivered by Donna, Harvey, and Louis, in turn. It’s fantastic to have compelling plot, but add to that some zingers that stand out, and it raises the overall quality of the thing considerably.

You won’t want to miss SUITS, returning to finish their second season January 17th at 10 p.m. ET on USA.