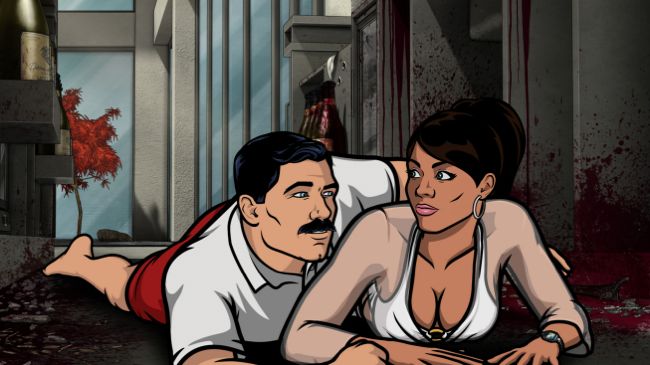 FX’s ARCHER is finally back this week with “Fugue and Riffs.” Archer (H. Jon Benjamin) has not been seen since his mother’s wedding, having run off, traumatized. But he soon surfaces down by the shore, living with a wife and kids, and running a greasy restaurant…

I can’t discuss the opening of “Fugue and Riffs” without spoiling something incredibly special, so I am just going to ask right now that you watch the episode and then come back to this article, because I just have to reveal the twist: The episode opens with Archer thinking his name is Bob, and he owns a place called Bob’s Burgers.

That’s right. Archer is living in the world of the FOX cartoon Bob’s Burgers, in which the titular character is also voiced by H. Jon Benjamin. All of the touches of Bob’s Burgers are there, including Jimmy Pesto’s across the street, Mort’s funeral parlor next door, the children and their goofy clothes, and even John Roberts voicing Bob’s wife, Linda. The only major changes are the animation style, which stays with what ARCHER viewers are accustomed to, and that Bob is the kids’ step-dad, having only lived there for two months.

I cannot express how awesome this mash-up is. It’s always been a little weird to switch back and forth between the two programs (both excellent and hilarious) and hear that same, distinctive Benjamin voice. I only wish that the conceit had been kept up, and maybe we would find out that, somehow, Archer had long been sneaking off to this secret family of his. Of course, that wouldn’t really work, plot-wise, and I’m grateful that this has been allowed to happen under any circumstances. Still, it’s quite a tease…

This isn’t the first time that ARCHER has referenced things, tongue in cheek, outside of the series itself. Jeffrey Tambor, who plays Jessica Walter’s husband on Arrested Development (new episodes coming to Netflix in May), has guest starred in four ARCHER episodes, so far, as a love interest for Walter’s character. It’s a bit meta, but meta is incredibly in right now, and has yet to grow stale.

The rest of “Fugue and Riffs” isn’t nearly as good. How can it be? There are plenty of signature ARCHER elements, a KGB attack (that starts in the burger joint), fun banter between Archer and Lana (Aisha Tyler), uncomfortable moments with Malory (Jessica Walter), some terrific Pam (Amber Nash) / Cheryl (Judy Greer) hang time, and tons of great one-liners and visual gags. Even the ending of the episode, discovering that Barry (Dave Willis), still up in his space station, is behind all of the trouble this week, is so unexpected and fun.

It feels wrong to complain about the rest of the episode because, if the opening hadn’t been so big, it would have been a typical ARCHER outing, and not at all a let down. The issue is, when an episode chooses such an explosive first few minutes, there has to be follow through, and there just isn’t here. Maybe the Bob’s Burgers stuff should have been worked into the finale of the episode, rather than the beginning. Maybe it just needed to start a larger story. Whatever the reason, it makes this episode slightly uneven.

Luckily, I’m sure that won’t be the case in the coming weeks. As I said, most of the episode is perfectly in keeping with the rest of the series, and ARCHER remains one of the best half hours on television. Its witty humor, smart writing, and delightful cast chemistry combine to make something really special. “Fugue and Riffs” has proven that these elements remain intact, after we get over the distraction of a brilliant initial sequence.