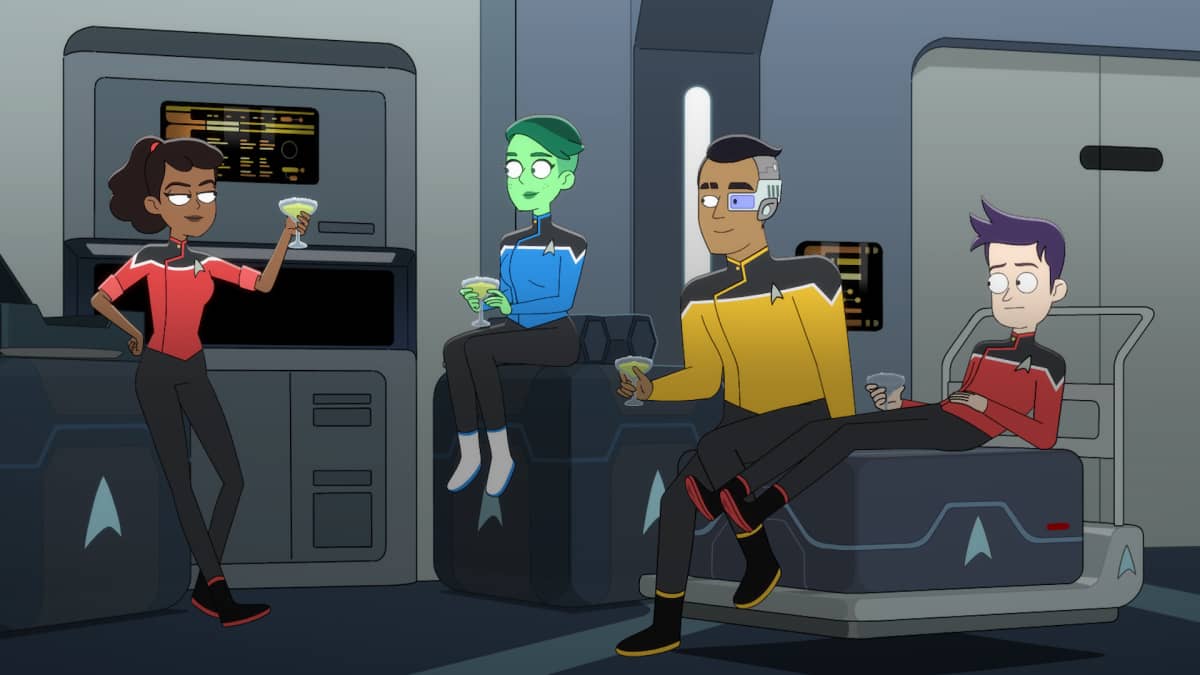 “…it might be the most ‘Trek’ series ever” (IndieWire), the  CBS All Access, soon to be Paramount+, original animated comedy series STAR TREK: LOWER  DECKS: SEASON ONE beams onto Blu-ray, DVD and limited edition steelbook on May 18 from  CBS Home Entertainment and Paramount Home Entertainment. The must-have collection is  packed with hours of exclusive special features, the highlight of which is “Lower Decktionary,” a  multi-part exploration of the series’ music, art design, animation process and more. Plus, the  collection features exclusive interviews with the voice cast, deleted and extended scenes, and a  fan-forward exploration of the series’ many Easter eggs.

STAR TREK: LOWER DECKS: SEASON ONE is the first animated Star Trek series in  almost 50 years. It focuses on the support crew serving on one of Starfleet’s least important ships,  the U.S.S. Cerritos, in 2380. Ensigns Beckett Mariner (Tawny Newsome, Space Force), Ensign  Brad Boimler (Jack Quaid, “The Boys”), Ensign Samanthan Rutherford (Eugene Cordero, Kong:  Skull Island) and Ensign D’Vana Tendi (Noël Wells, “Master of None”) have to keep up with their  duties and their social lives, while the ship is being rocked by a multitude of sci-fi anomalies. The  Starfleet characters that comprise the ship’s bridge crew include “Captain Carol Freeman,” voiced  by Dawnn Lewis (“The Rich & the Ruthless”); “Commander Jack Ransom,” voiced by Jerry  O’Connell (“Billions”); “Lieutenant Shaxs,” voiced by Fred Tatasciore (“American Dad!”); and  “Doctor T’Ana,” voiced by Gillian Vigman (“New Girl”).

The Blu-ray, DVD and limited edition steelbook offer fans all 10 episodes from the debut season  and nearly two hours of exclusive special features including:

● CRISIS POINT: THE RISE OF VINDICTA TRAILER (Exclusive) – An exclusive, over-the top action trailer based on the in-episode movie from “Crisis Point.”

● FACES OF THE FLEET – A deep dive into the crew of the U.S.S. Cerritos , alongside  producers, writers and the cast of Star Trek: Lower Decks. Highlighting character  backstories and the behind-the-scenes development of their hilarious on-screen  personalities, this exclusive featurette takes a look at Ensigns Beckett Mariner, Ensign Brad  Boimler, Ensign Samanthan Rutherford, Ensign D’Vana Tendi and more.

● HIDING IN PLAIN SIGHT (Exclusive) – An inside look at canon and hidden Easter eggs  throughout the series, including freeze frame images and insightful commentary from  producers, creatives and cast.

○ JOINING STARFLEET (Episode 101) (Exclusive) – Producers and crew discuss  the development of season one from storyline to visual artistry.

○ ALIENS AMONG US (Episode 102) (Exclusive) – Dives into the different aliens  Ensigns Brad Boimler and Beckett Mariner encounter as they escort K’orin to the  Tulgana 4 planet.

○ THE ANIMATION PROCESS (Episode 103) (Exclusive) – A look at the efficiency  and creativity needed to put together an episode of “Lower Decks” in this other worldly look at the animation process.

○ THE MAIN TITLES (Episode 104) (Exclusive) – Immersed in the creation of the  episode’s title sequence, the featurette explores the graphic design and thematic  music developed for Lower Decks.

○ ART DESIGN (Episode 105) (Exclusive) – A look at characters’ style and the sets  that elevate the animated on-screen adventures of the U.S.S. Cerritos . ○ THE HOLODECK (Episode 106) (Exclusive) – Including interviews with cast and  creatives, the featurette highlights what Holodeck experience they would like, how  characters use it, and how it’s not only used for skills training, but sanity.

○ DIVISION 14 (Episode 107) (Exclusive) – Not everything goes right for Starfleet  – catch up with Division 14 who is tasked with dealing with all the unexpected  mishaps.

○ DECK DYNAMICS (Episode 108) (Exclusive) – A dive into the upper and lower  deck dynamics, and how their comedic interactions contribute to the storyline  throughout season one.

○ THE MUSIC OF LOWER DECKS (Episode 109) (Exclusive) – Star Trek music  is iconic. Explore how traditional themes have been integrated into Lower Decks  and the episode’s in-story movie in this deep dive into the differences of scoring  for animation versus live action, and comedy versus drama.

○ ALL IN THE FAMILY (Episode 110) – As the debut comes to a close, fans can  take a look at evolution of the crew and their relationships over the last year, and  how Lower Decks fits into the Star Trek family as a few legacy characters appear.

ViacomCBS’ existing subscription video-on-demand and live streaming service, CBS All Access, will be  rebranded as Paramount+ on March 4, 2021 as part of the service’s expansion to feature content from  ViacomCBS’ leading portfoloia of broadcast, news, sports and entertainment brands. ViacomCBS will also  bring Paramount+ to international markets with an initial debut in Australia, Latin America and the Nordics in  2021.

CBS Home Entertainment manages the worldwide DVD and Blu-ray businesses for the CBS Corporation  across all lines of content including current hits and classic series from the vast CBS library, as well as new  releases from Showtime Networks. CBS Home Entertainment products are released on the CBS DVD and  CBS Blu-ray labels.