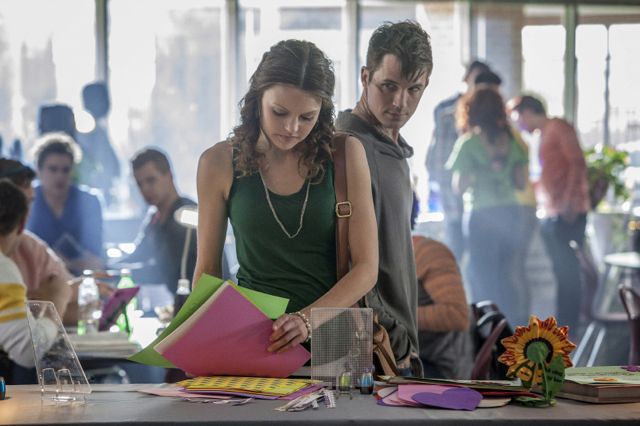 The CW’s STAR-CROSSED is designed as a modern day Romeo & Juliet, especially evident by the tragedy at the end of the first hour, as well as the lead couple. Aliens known as Atrians crash land on Earth. Although the Atrians are peaceful, mankind doesn’t give them a chance and immediately slaughters or captures the survivors. One young Atrian boy escapes and hides in a shed where he meets a human girl. Ten years later, the two encounter each other once more when the Artian is integrated into the girl’s high school.

Poor Aimee Teegarden. After graduating high school after five seasons on Friday Night Lights, she’s now sent back at age twenty-five to repeat it, playing Emery Whitehill, the human lead in STAR-CROSSED. She passes for a teenager, I guess, but were there no talented fifteen-year olds around to handle the part? And why cast the adorable Maggie Elizabeth Jones (Ben and Kate, We Bought a Zoo) as Emery if they were just going to age the character early in the “Pilot,” ditching her red hair in the process?

Believe it or not, that’s just the least of STAR-CROSSED’s problems. The show gets the high school setting completely wrong. Most public institutions will be lucky to have today’s best technology in ten years’ time, let alone automated cafeterias, fully electronic lockers, and holo-projectors. Not to mention, the cell phones the kids use are thick and don’t roll or fold up at all. I suppose some of this could be explained in that there’s an alien ship in town, and so maybe this particular town has benefited in advancements from off world, but there’s certainly no indication in this pilot that that is the case.

The premise of the society portrayed also is beyond weak. We’re supposed to believe the aliens rolled over when humans slaughtered them, then gleefully learned English and our pop culture in only a decade? While, meanwhile, Americans brought back every bit of their racism in the way they treat the new residents of Earth? It’s District 9 on steroids, but without a full thinking through of the set up or players.

Worse still, when Roman (Matt Lanter, 90210), the lead alien, and his friends are brought to school, in a clear parallel to our history in the American south, armed guards are allowed to patrol the hallways, but don’t actually keep an eye on the extraterrestrial attendees. Setting aside the big guns that should not be in a place of education, humans are permitted to bully the aliens without repercussion, and the authorities offer no assistance when the aliens are harassed?

Basically, so much about the structure and execution of this world just plain sucks.

The question is, will the target audience of the CW be able to look past all of that and just enjoy the teen drama? Because in that, STAR-CROSSED delivers a pretty typical batch of characters with standard screen tropes. The popular girls are represented, and there’s the jock, Grayson (Grey Damon, also from Friday Night Lights), who is interested in Emery before she chooses Roman over him. There’s even a Twilight-vibe going on as Emery, who is an outsider that the cool kids are accepting of at first, meets Roman and his friends, who are the stranger loners segregated from everyone else. So there may be appeal here for a certain audience segment.

Plus, there are the “mysteries” designed to hook the viewer. One involves Emery’s terminally ill friend Julia (Malese Jow, The Vampire Diaries). I won’t spoil what happens for those who do want to check out this pilot, but suffice it to say, while the occurrence late in the hour does draw intrigue, it doesn’t make sense that it’s been kept a hidden secret so long, especially by those who want peace between the species.

The CW certainly knows its target audience, and STAR-CROSSED seems designed to grab both segments of the network’s viewers. Most of their series are either centered on angsty young people more concerned with romance than real problems, and a lot of the others are science fiction and super natural leaning, often with younger protagonists. STAR-CROSSED is combining both of those types of shows in what they surely hope is a perfect storm.

The thing is, even though I’m a thirty-year old man, I still like a lot of the CW’s stuff, from Arrow to The Vampire Diaries, and mourn the loss of Gossip Girl. However, STAR-CROSSED just has too many logistics issues to get past for it to join my season pass list. I’ll watch at least one more hour to see if it improves, but so much of the story is so unrealistic that it’s hard to be drawn in. Maybe next time they can do better.

STAR-CROSSED airs Monday at 8 p.m. ET on the CW.