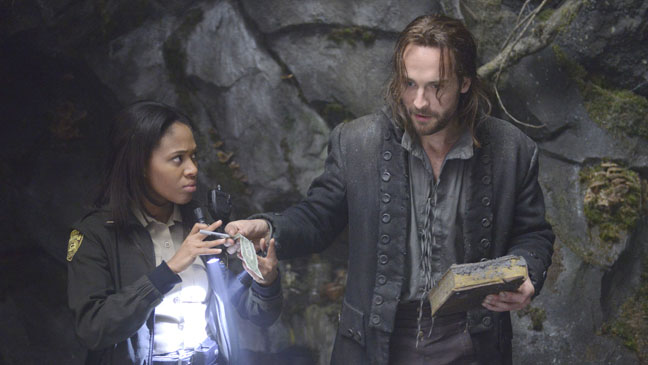 As fairy tales have never been a hotter genre for network television, FOX jumps into the game with its take on an American classic, SLEEPY HOLLOW, premiering Monday, September 16th at 9 p.m. ET. SLEEPY HOLLOW takes the short story by Washington Irving, brings the characters into the modern age, and combines them with biblical mythology and the occult. It’s a fascinating idea, somewhat well executed, with the makings of an intriguing series.

The “Pilot” begins with Ichabod Crane (Tom Mison, Parade’s End) fighting for George Washington in the late eighteenth century. Ichabod chops the head off a soldier, then wakes up in a cave in 2013. Unsure what is going on, he stumbles into Deputy Abbie Mills (Nicole Beharie, Shame), whose boss, Sheriff August Corbin (Clancy Brown, The Shawshank Redemption), has recently been slain by Ichabod’s old foe, the solider he killed, the Headless Horseman (Richard Cetrone).

The Headless Horseman is not a lone figure come to haunt us from the past, though. He is one of the Four Horseman of the Apacolypse, which, as foretold in the Bible’s Book of Revelations, seek to end the world. They are said to come during a time of reckoning, when two witnesses will stand against the forces of hell, culminating in much death and destruction. Considering Ichabod’s journey and Abbie’s childhood experiences, they must just be the two.

But why has the time come now? Well, that is up to two factions of occult members, one side good and one side evil. They have been fighting each other for a long time in the inappropriately-named town of Sleepy Hollow, and their battle has come to a turning point. Now is the time to act, and only Ichabod can help Abbie win the war. At least, he can help if he remembers his past and why he was sent, which is fuzzy for the time being.

The premise is a very cool one. It seems natural to tie the biblical story into the American fairy tale in this manner, and adding in witches and the occult are other nice elements. This automatically creates a rich world with many layers and players, giving us historical and fictional context, and promising many seasons before the storytelling grows stale, as well as an expected end point.

I really like the cast, too. Mison is interesting as Crane, a hero who has embraced his destiny, even if he doesn’t quite understand it, and Beharie holds her own against him. Brown’s role is memorable, though small, and others in the “Pilot,” including John Cho (Go On) as a fellow cop and Patrick Gorman (Gettysburg) as a possibly sinister reverend, stand out. Orlando Jones (MADtv) plays wonderfully against type as Captain Irving, the police chief with a homage for a name.

The special effects are great, and the scenery is appropriate. Putting Sleepy Hollow in the traditional New England setting, with dark tones and creepy style works. SLEEPY HOLLOW is akin a bit to NBC’s Grim, but with its own flavor, and it definitely will not be a case-of-the-week procedural, a hole that Grim took awhile to climb out of.

What the show lacks is consistency. This is most glaring in Ichabod himself. He is surprised at a couple of things when awaking in the future, but those are perfunctory. He comments on Abbie’s trousers, but not her dark skin and position of authority. He wonders about things he sees from the moving car, but doesn’t obsess over the computers, electricity, and gadgets around him. Yes, SLEEPY HOLLOW cannot allow itself to get bogged down in such trivial manner for the first ten episodes, but they deserve a little more exploration than what they get, and one wishes the first installment had been designed as a two-parter so it could take its time with the pacing.

The police chief and officers also don’t act as they should, and laws and rules are ignored without consequence. This may be eventually explained away be deeper involvement by certain people in the strange happenings, but it doesn’t satisfy why Abbie doesn’t comment on or worry about it.

There are also holes in how SLEEPY HOLLOW lines up with the source material. I like the appearances of Ichabod’s wife, Katrina Van Tassel Crane (Katia Winter, Dexter), as a connection to the past, and think the SLEEP HOLLOW tale is given its due, mostly, given the set up. But what is said about Revelations only minimally lines up with what is in the Bible, and the prophecies that are supposed to lead up the seven years of trials and tribulations have not come to pass and are not mentioned. This is a sort of disappointing failure.

Despite the plot holes, though, my overall impression is favorable. Who wouldn’t like to see an out-of-his-time Revolutionary War soldier team up with a tough, African-American woman cop as they spend seven years fighting demons near the Hellmouth in a legendary town, especially when it’s not cheesy? This is the recipe for a good show whose flaws will likely seem meaningless half a season in, as long as the writing and acting stays consistently good compared to itself.