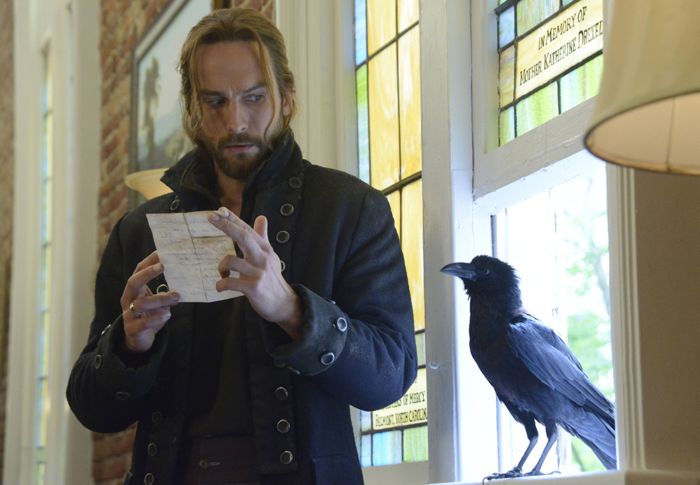 After last week’s disappointing go-round, it’s gratifying to witness SLEEPY HOLLOW’s return to form in tonight’s “The Weeping Lady.” A haunting figure from Ichabod’s (Tom Mison) past begins threatening the women he cares about. It’s not a creature-of-the-week story, though, as the plot ties into a number of threads for various characters, making the struggle matter to the much bigger picture.

“The Weeping Lady” opens with Ichabod hanging out with Caroline (Laura Spencer), who, as viewers may remember from last year’s season finale, is involved in historic re-enactments. The two have become friends, and this bond survives even after Caroline (justifiably) mistakes Ichabod for a single man with whom she could have a romantic entanglement. Sadly, this marks Caroline to be The Weeping Lady, Mary’s (Heather Lind, Turn: Washington’s Spies), first victim, and she’s soon dead.

It’s a shame Caroline bites it. I know Spencer is super busy these days, with roles on The Big Bang Theory and Bones, but she lets us see a side of Ichabod that no one else does. Their involvement in her hobby, which allows Ichabod to nostalgically revisit his own time, is sweet and moving. It’s also a break from the monsters and mayhem. I hope SLEEPY HOLLOW finds someone else to take Caroline’s place in the near future, even if the show risks repeating itself in developing characters.

After Caroline, Mary goes after Abbie (Nicole Beharie), of course, but Abbie survives. It doesn’t make a ton of sense that Abbie escapes what Caroline cannot, but that’s just one of those things viewers have to accept to enjoy a television show. Main characters usually survive; guest stars, not so much. Besides, we don’t really want to lose Abbie.

Finally, Mary learns of Katrina’s (Katia Winter) existence, and the spirit is no match for the witch, who manages to stop her once and for all. Katrina is a formidable foe for anyone, and no one else stands a chance at Ichabod’s heart while she is around.

Is that still true, though, after “The Weeping Lady?” Katrina reveals that she covered up Mary’s death in the past, and this is a final straw for Ichabod, who reams her out for all of the deceptions she has committed. Before the couple can work things out, Katrina goes home with Abraham (Neil Jackson) to protect her cover, further alienating Ichabod. Ichabod is too good a man to just end his marriage, but it’s something he should consider since Katrina is proving to be less than trustworthy and is certainly not around much. Her excuses make sense, but they are excuses, and there’s far too many of them.

While Ichabod’s relationship falls apart, Abbie’s is kicking off, her flirtation with Holly (Matt Barr) heating up. Or is it? Unfortunately, what Abbie doesn’t know is that Holly and her sister, Jenny (Lyndie Greenwood), have an existing physical relationship. Holly definitely prefers Abbie and rejects Jenny’s advances, but that won’t stop some major drama when the siblings learn that they have their eye on the same guy.

Henry (John Noble) slides into the episode because he brings Mary forth in an effort to thwart Katrina. He is subsequently chewed out royally by Moloch (D.J. Mifflin) for endangering Katrina because she’s an important part of his plan. This really starts to fill in some blanks in the overall mythology of SLEEPY HOLLOW and it’s very interesting to see where Henry fits in the villain hierarchy, perhaps a little lower than some might have thought.

The way all of these various character are interwoven, though, is by far the best part of “The Weeping Lady.” There’s a little bit for each of these players, complete with Revolution-era flashbacks, and they all seem to fit together like a well-made puzzle, interlocking, sometimes in unexpected ways, but all part of a singular vision. It really takes a team of brilliant minds to make a show this cohesive, and while not every episode of SLEEPY HOLLOW is perfect (last week’s stinker, for example), this is a fine example of the program at its best.