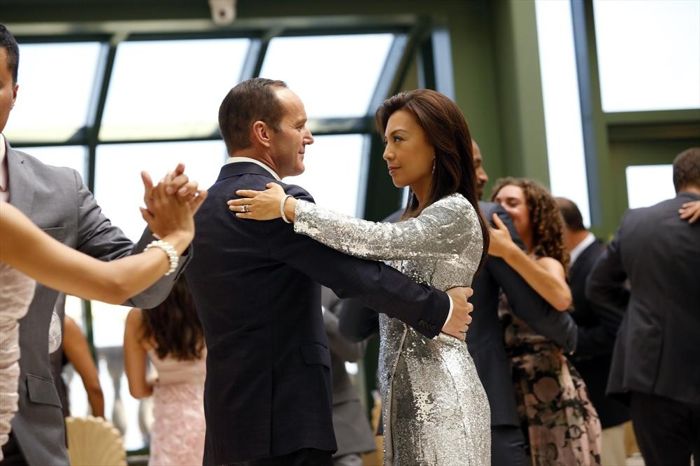 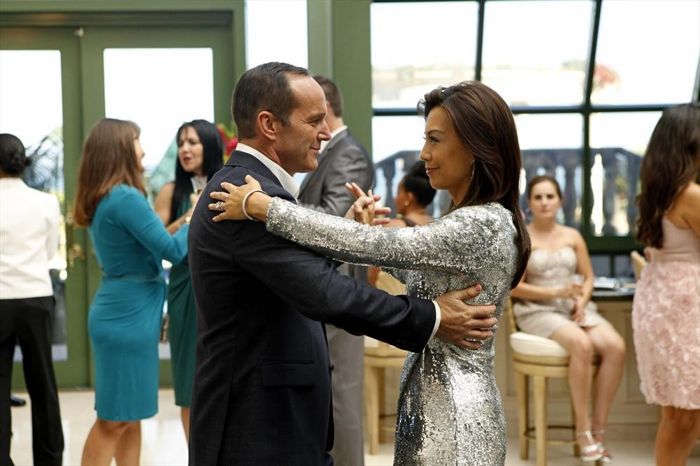 On MARVEL’S AGENTS OF S.H.I.E.L.D., in an episode titled “Face My Enemy,” Coulson (Clark Gregg) and May (Ming-Na Wen) go undercover to obtain an artifact that has the same strange markings Coulson has been carving. They are hampered by a familiar face with unknown motives. Meanwhile, Fitz (Iain De Caestecker) may be the only one who can save the rest of the team when The Bus is sabotaged. But with his mental problems, is he up to the task?

“Face My Enemy” isn’t a relatively big episode, by any means. There are some nice character moments, but little movement on the larger arcs, the script mostly focused on a mission-of-the-week. This is disappointing as AGENTS OF S.H.I.E.L.D., like most shows, works best when it favors the overall story, rather than a procedural format. Hopefully, as in some of the rough episodes early in season one, the seeds planted this week will blossom into something more enticing as the year unfolds.

In looking at the characters, Fitz has the best plot. He is still stammering, still hallucinating Simmons (Elizabeth Henstridge), and growing very frustrated that he is no longer valued. I think he’s wrong that the others don’t care him, as they will do whatever they can to help, but he’s right that his importance is minimized, with a new lab being built without consulting him. These decisions may make sense logically, but Fitz’s feelings should be considered, too.

Fitz is determined to prove himself to be valuable once more. It’s no easy task, but an excellent opportunity presents itself when several lives, including his, are put on the line. Operating under pressure and strict time limits is a constant part of the job, and that’s when it’s most vital that Fitz step up. Thankfully, he does, working with Hunter (Nick Blood) in a couple of moving scenes that show Fitz not only getting better, professionally speaking, but starting to form new bonds of friendship, which will serve him well in his re-integration to the team.

At the same time that everyone on MARVEL’S AGENTS OF S.H.I.E.L.D. is able to stop worrying about Fitz, they need to start worrying about Coulson. Coulson clearly wants to help himself, going out into the field personally to recover the artifact in “Face Me Enemy,” rather than just sending his people. Yet, he himself wants to discuss contingency plans, naming May heir apparent, a mantle she doesn’t want to shoulder, as she’d rather devote her resources to taking care of Coulson.

How much should one really be worried about Coulson? He keeps saying he doesn’t want to end up like Garrett, but Garrett was part of Hydra long before he took the medication. His issues went far deeper than the connection he shares with Coulson. Coulson may lose his judgment and reasoning skills, but as long as May is able to help him step down from the Director job, he doesn’t need a bullet in the head, Coulson’s suggestion for dealing with the problem. Why is he thinking in such extremes?

I sincerely hope MARVEL’S AGENTS OF S.H.I.E.L.D. doesn’t remove Coulson from the game. It’s hard to imagine the show without him, the writers already bringing him back from death to star in it. The characters on this show are not static, but there are plenty of directions to take Coulson in without killing him. Whether he is healed or descends into madness, there’s no reason to get rid of him any time soon.

Besides, Coulson will be needed. Whitehall (Reed Diamond) is demanding Raina (Ruth Negga) give him back the mysterious obelisk, and it looks like she’ll have to if she wants to live. In Whitehall’s control, there is no telling what the strange device will do. We’ll need all hands on deck, including Coulson’s.

Is it just my imagination, or is something sparking a little bit between Skye (Chloe Bennet) and Triplett (B.J. Britt)? There’s nothing overt, but an underlying tension seems to be present, and I’ll take this pairing. They are both young, hot, and capable. Why not?

There are plenty of enticing things in “Face My Enemy,” from the “reveal” of Talbot (Adrian Pasdar) to be Hyrda, to the reveal that he’s not actually Hydra, to May fighting a woman disguised as May (both played by Wen), to some lovely dialogue between May and Coulson. For an episode that really doesn’t go far enough into the mythology, it’s still pretty entertaining.