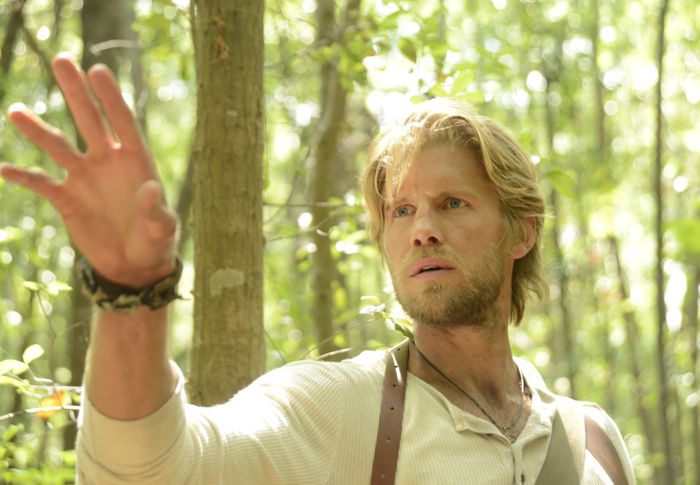 Adding to the already rich mix of curious characters on the Fox drama series SLEEPY HOLLOW, Season 2 introduced Nick Hawley (Matt Barr), a procurer of strange and unusual artifacts.  So far Hawley has proven to be a handy asset in a pinch, particularly when things get too spooky and supernatural and he barely even flinches.  That ability to take the unusual events of SLEEPY HOLLOW in stride has made him a valuable resource for Ichabod Crane (Tim Mison) and Detective Abbie Mills (Nichole Beharie).

In a recent press conference call, guest-star Matt Barr talked about Hawley’s true motivations and whether there is a bromance brewing between Hawley and Ichabod.

Your character has been a mixed ally for Abbie and Ichabod.  Can you talk a little bit about how we will see their relationships develop coming forward with the next coming episodes?
MATT:  Hawley realizes that in his efforts to take care of himself, he needs Ichabod and Abbie for his own self-preservation.  So, ironically, it’s even selfish of him that he realizes in order to survive the apocalypse he might have to join the Scooby Doo gang in order to survive.  I think he knows that he needs them as much as they might need him.  In that experience, he might bond a little bit with these guys.

He also has a past relationship with Jenny (Lyndie Greenwood).  Can you talk anything about if we will learn more about that, or how their relationship will continue going forward?
MATT:     YHawley’s six degrees of separation is that he does have a history with Jenny. I think they, obviously, come from the same salt. They understand each other, and I think that creates a vulnerability for Hawley because he recognizes that in her, and it also scares him. So I think that’s why he keeps his distance with Jenny.  Again, there’s that curiosity and there’s that intoxication; the chemistry that you can’t deny.  He’s not going anywhere, as of now.

Could talk a little bit about what motivates Nick aside from obviously what we have seen so far, which is his financial motive?
MATT:   I think Hawley is driven by the drug of it; the thrill of the ride.  It’s about the great mystery of what’s beyond the next horizon.  Even if the apocalypse is upon him here at Sleepy Hollow, he’s game.  He wants to be on the front lines of that experience.  He definitely doesn’t want to be on a bench.  I would say, wherever the action’s happening, he wants to be there.

In terms of getting to know the character, how much do you know about his back story already?  Is this something that you know and you put into your performance, or do you find out on a week-to-week basis?
MATT:  I actually didn’t know his back story until a couple nights ago.  I sort of created my own. I call it: Hawley history.  It’s funny how it mirrored what the writers and the producers actually are creating for the character.  It was very similar.  There’s a lot of synergy in that relationship, I guess, because we were very much in sync.  So I think we’re on the same page with where he’s been and where he’s going.

What will it take for Hawley to actually get to work with Ichabod and Abbie without survival being the main factor?  Is there any point where he’s just going to be like, “okay, I just like these guys, I’ll help them out”?
MATT:   Well, like any loner, eventually you get to a point where you invest in something more meaningful.  I think Hawley’s probably always searched for that family.  I don’t want to give too much away, but he didn’t have that growing up. So I think he’s potentially found that with Ichabod and Abbie and Jenny and the whole gang.  When you find that, you want to stick around and you invest in something.

There seems to be a little bit of chemistry going on between Abbie and Hawley.  Obviously she challenges him, so is that something that Hawley sees as something worth pursuing?
MATT:   Abbie’s a very truthful person and she does challenge Hawley, which is the most intoxicating thing for him because he wants to be stimulated, and he’s always on the search for the next great treasure.  I think that there’s a mystery to Abbie that Hawley is really engaged by.  Again, he does it for work and then in his personal life he’s always trying to find that next great mystery or whatever that treasure is.  Abbie’s tough to crack.  He keeps coming back, and whether he’s bold enough or stupid enough, he keeps coming back.  There’s some chemistry there.

Obviously Hawley and Ichabod are very smart men. They’re pretty much circling each other.  It seems like Ichabod is more adware of Hawley’s interest in Abbie than Abbie is.  If so, how is that progressing and you can tease whether that create a little more tension between Ichabod and Hawley?
MATT: Well, Ichabod, he might be the smartest man in the room, and he definitely is.  He’s not an idiot.  He can see Hawley moving in on his partner.  I think he balances a line of knowing that Hawley has the utility that serves the team and, at the same time, Hawley’s shifty and he knows that.  As we’ve seen over Season 1 and now in Season 2, he cares about Abbie, obviously, and he’s looking out for her.  He’s cautious, I would say, regarding Hawley.

What is it about SLEEPY HOLLOW that made you say “yes”?  What is it about the premise that you just went, “okay, I have to try out for this role or try to play this role”?
MATT:   I think it was the fact that the little boy in me always wanted to be a treasure hunter. It’s like I wanted to be Hawley.  I wanted to be Indiana Jones; so I guess that was it.  I can live vicariously through this character, so I get to enjoy my day job.

Is there a particular creature or demon or legend that you’d like to see Hawley fight?
MATT:   I’ve always been curious about the monster that lives under your bed.  Even now at 30 years old, I wonder, like something that comes—when you lean over the bed, there’s something under there, potentially.

What has been your favorite scene or episode to film so far?
MATT:    I think it was actually the first episode I filmed.   Me and Tom, who plays Ichabod, had a scene in a church where we’re looking at the stain glass window.  It was the first time that I experienced that dynamic between Hawley and Ichabod and how fun that was going to be.  As actors, I think we both got the wink of the whole joke, which was, these guys are two different people, but they’re meant to be together.  I’d say that was fun.

Much has been made of this whether Hawley is friend or a foe; which part do you prefer to play?
MATT:   It’s much more fun being the foe, is it not? I think what’s fun about Hawley is that he’s bipolar in the sense that he can jump onboard at any moment, and also any moment he can jump ship because he takes care of himself.  I think that makes for a really fun and dynamic character.  He’s unpredictable, which is always entertaining.

From the scenes that we’ve seen so far between Ichabod and Hawley, they’ve been nothing short of hilarious. So can we expect a bromance to develop between these two, or are they going to be adversaries over the course of the season?
MATT:   Well, I hope that they’re always adversaries because that’s a fun dynamic.  I think they will recognize that they serve each other and there’s a higher goal and that there’s something more important than themselves.  I don’t want to give too much away, but we get to see a turn with Hawley; for a conventional loaner, he starts to find a bond with this group and especially with Crane.

With Ichabod being so new to the 21st Century and Hawley being such a scoundrel — he knows all the dirty places, all the cool places.  Can you imagine Hawley, or would you want Hawley to take Ichabod and introduce him to his world?  Like, take him to a bar he’s never been to, or introduce him to nice sights or something?
MATT:  There’s the episode that’s waiting to be written where Hawley takes Ichabod to Vegas and they go to a prize fight, and then they go to the craps table.  What’s funny is that, through the episode I bet they find out that they really do love each other.  They’re probably made for each other.  They’re bros.

About the fight sequences.  We had that really great one with the Pied Piper.  How have you prepared or do you do any prep, in particular, for the more action-based sequences?
MATT:   My dad was a college football coach, so we’re a big, athletic family.  I was either going to be an athlete or an actor.  As an actor, I hoped I would be able to bond the two, so that stuff was fun.  But, I have to give props to my stunt double, Miles Brew, who is the real deal and gets to do all the fun stuff and make me look good.

If and when Hawley ever dies for whatever reason; not saying that he is, but would you want to focus more on films, or do you like working on shows like this?
MATT:   I think there’s something fun about television where, as the actor, when you read the script each week it’s kind of like the audience experiences watching the show each week.  I don’t know what’s going to happen with Hawley or with Ichabod and the apocalypse.  It’s fun to get that script every Monday morning and go, “Cool.  I’m a professional actor, but I’m also a professional story lover.”  I guess I get off on that thrill.

To see what wacky Ichabod and Hawley adventures are coming up next, be sure to tune in for all new episodes of SLEEPY HOLLOW air Monday nights at 9:00 p.m. on Fox.