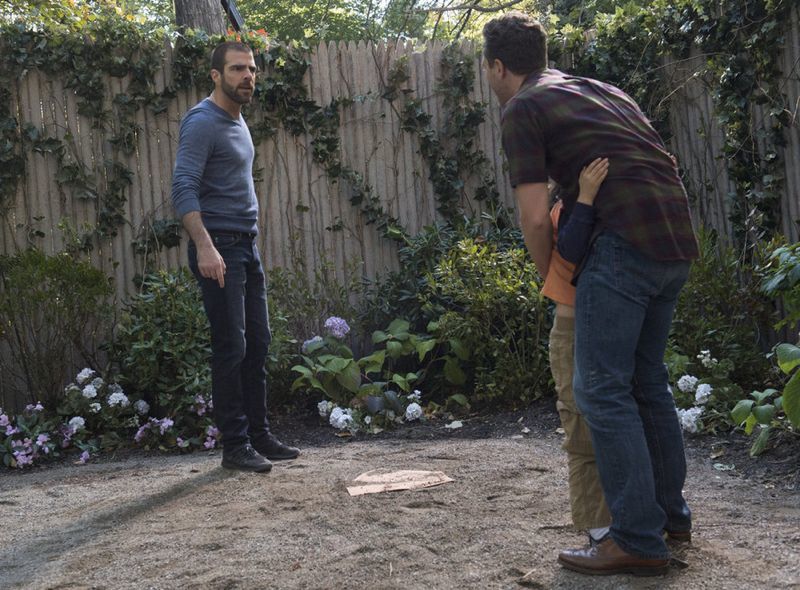 NBC’s new mini-series, THE SLAP, premiered last night. Based on the book of the same name, and following a successful Australian adaptation, this drama tells the story of a man slapping a child who is not his own at a party and the fallout from the incident. It will unfold over eight weeks, presumably showing us the varied lives of the group gathered who witness the encounter, as well as what happens to the man who slaps.

THE SLAP starts out interestingly enough. Narrated by the great Victor Garber (Alias, Titanic, Eli Stone), viewers are introduced to Hector (Peter Sarsgaard, The Killing, Jarhead), a man just turning 40 who is passed over for a major promotion at work. Hector is also frustrated with his wife, Aisha (Thandie Newton, Rogue), the type of woman who passes up a free vacation to Greece because she’s busy with her job, which leads to him fantasizing about the babysitter, Connie (Makenzie Leigh, Gotham). Hector is able to resist those fantasies until he finds out that Connie shares them, but even then, he’s not willingly to all-out cheat on his wife. Yet, anyway.

The first twenty minutes of the show, painting the portrait above, are actually interesting. They’re not wholly original, of course, a restless man in a mid-life crisis being a familiar archetype, as is the ingénue that catches his attention. But because Sarsgaard and Garber are involved, I liken it to a weaker version of The Affair playing out, and it’s good.

Unfortunately, the show goes downhill fast when everyone else arrives at Peter’s house for his birthday party. Suddenly, there are lots of people whom the show does a poor job of explaining the relationships between, mentioning a few connections, but mainly just tossing everyone together. There are also some very flat roles, and tons (and I do mean tons) of foreshadowing for the upcoming conflict. The party sequence takes what seems like a higher-quality, quiet drama and turns it into a predictable cartoon.

This is most obvious in the dynamic between fathers Harry (Zachary Qunito, American Horror Story, Star Trek) and Gary (Thomas Sadoski, The Newsroom), as well the behavior of Gary’s son, Hugo (Dylan Schombing, Girlfriends’ Guide to Divorce). Hugo is the epitome of an out-of-control, spoiled brat, making messes on purpose and endangering the other children. Gary and his wife, Rosie (Melissa George, The Good Wife, reprising the role from the Australian version), don’t punish Hugo, allowing the walking, talking kid to breast feed instead. This offends Harry, who has extreme anger issues, and Gary and Harry bicker often.

The slap itself is equally ludicrous. The kid is a brat, absolutely, and should be spanked (in my opinion) – by his parents. Instead, Harry slaps him not to stop an action being taken, but to get his attention and to punish. I know there are anger issues involved, but what kind of grown man hits a child in their face, hard, especially in those circumstances? Harry is a complete, irredeemable monster, and his lack of being apologetic is inexcusable, even among those who approval of corporal punishment.

I think all of the telegraphing of the event is worse than the slap itself because, not only is the series called THE SLAP, but promos for it heavily feature Harry smacking Hugo. I haven’t seen the Australian version and have no idea how it was marketed, so I’m judging the U.S. production purely on its own approach. I’d probably still object if I didn’t know Harry and Hugo were the two involved in the titular event because of the lack of subtlety in how the situation is presented, but if viewers weren’t aware of who slapped who, at least THE SLAP could trick us with teasing several possibilities instead of delivering something so ridiculously packaged.

I don’t blame the failure of THE SLAP’s first episode on the cast. All of those listed above are usually great performers (though Quinto seems miscast here), and they are joined by Uma Thurman (Smash, Kill Bill), Penn Badgley (Gossip Girl, Easy A), Brian Cox (Braveheart), Marin Ireland (Homeland, Masters of Sex), Maria Tucci (Law & Order), and Lucas Hedges (Moonrise Kingdom). This is a pretty strong ensemble, so if they can’t make a script work, that’s saying something, unfortunately.

Still, The Slap is not completely without promise. Like I said, I really enjoyed the first twenty minutes or so. If the other seven episodes can really focus on character development, using the actors’ strengths to tell a moving, personal drama, it could be worth watching. But the sheer shallowness and sloppiness of most of this first hour is disappointing, so while I’ll probably give the series a second chance, if it doesn’t clean up its act, it likely won’t get a third.

The Slap airs Thursdays at 8 p.m. ET on NBC.