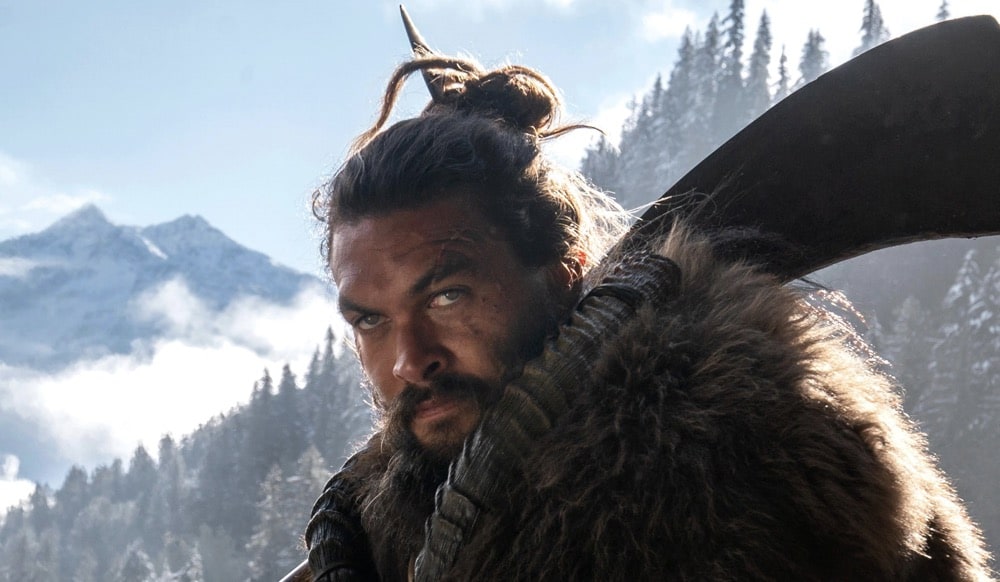 Part of Apple TV+’s slate of programming, SEE is a post-apocalyptic drama about tribes of blind people warring over mystical things, such as a pair of twin babies who can see. Plenty of battles and lots of animals skins and furs, it’s a show that appears to take place hundreds, if not thousands, of years ago, while actually having a slight futuristic sci-fi aspect to its fantasy.

Jason Momoa (Game of Thrones, Aquaman) capably stars as Baba Voss, leader of a tribe on a hill. Before the series begins, a mysterious woman, Maghra (Hera Hilmar, Da Vinci’s Demons), comes among them and is taken in by Baba, under his personal protection. But when she gives birth to a pair of babies, one male, one female, whom nurse Paris (Alfre Woodard, Luke Cage) says are special, an army of witchfinders threatens the people. Baba and his tribe must flee, and their escape route is supplied by the infants’ unseen true father.

The premise involves disease wiping out most life on Earth and the survivors being left universally blind. SEE is set hundreds of years after these events, but for some reason, the individuals in it live like historical tribal people. Why? Would it not make much more sense than technology was clung to, which would provide assistance for an unseeing people? Would that not be a more reasonable future after such a disaster? And even if technology could not be salvaged, why are most people far away from the remnants of what was? It’s quite late in the pilot before we see any ruins. Would so many people be willing to just walk away? And where are the new trappings of life that would be specific to a totally blind society?

Worse are the battles that are a key part of SEE. Some elements of different fighting are shown for the blind people, with special listeners and sensors. But there are melees typical of modern film, where there is much close hand-to-hand fighting. In such a situation, it would be nearly impossible to tell who is friend and who is foe without some major difference between the peoples. This could be in clothing materials or hair styles or something, but none is obviously present. There’s blind swinging and stabbing, and even some distance throwing of weapons that somehow strike their targets. Some care is given to adjust to the world in the premise, but not nearly enough. The battles don’t feel realistic, unfortunate as they seem to be key to the genre.

Character development is lacking, too. Most of the people are forgettable, blending together. Several warriors stand by Baba when the council of his people threaten to turn against them, but it’s not easy to differentiate between them. The acting is being sold as much as one can, but I don’t think the performers are given much to work with.

It’s not much of a mystery to me why Woodard and Momoa are the only very recognizable faces among these masses. I don’t know who would want to sign on to a half-baked fantasy series so soon after Game of Thrones. Horrible ending aside, GoT left a lot to live up to, and it would be foolish to try to follow it without a solid plan. SEE does not provide such an example. It’s closer to Vikings, which was somewhat good, but wasn’t under the pressure to stand out that this is. It’s hard to see it running very many seasons, even on a brand-new network that is motivated for its earliest shows to succeed.

SEE is not without any redeeming qualities. Production design is interesting, and there are some ideas worth exploring. It just doesn’t do enough to begin strong, and thus is unlikely to be more than a blip in television history, over soon and quickly forgotten.