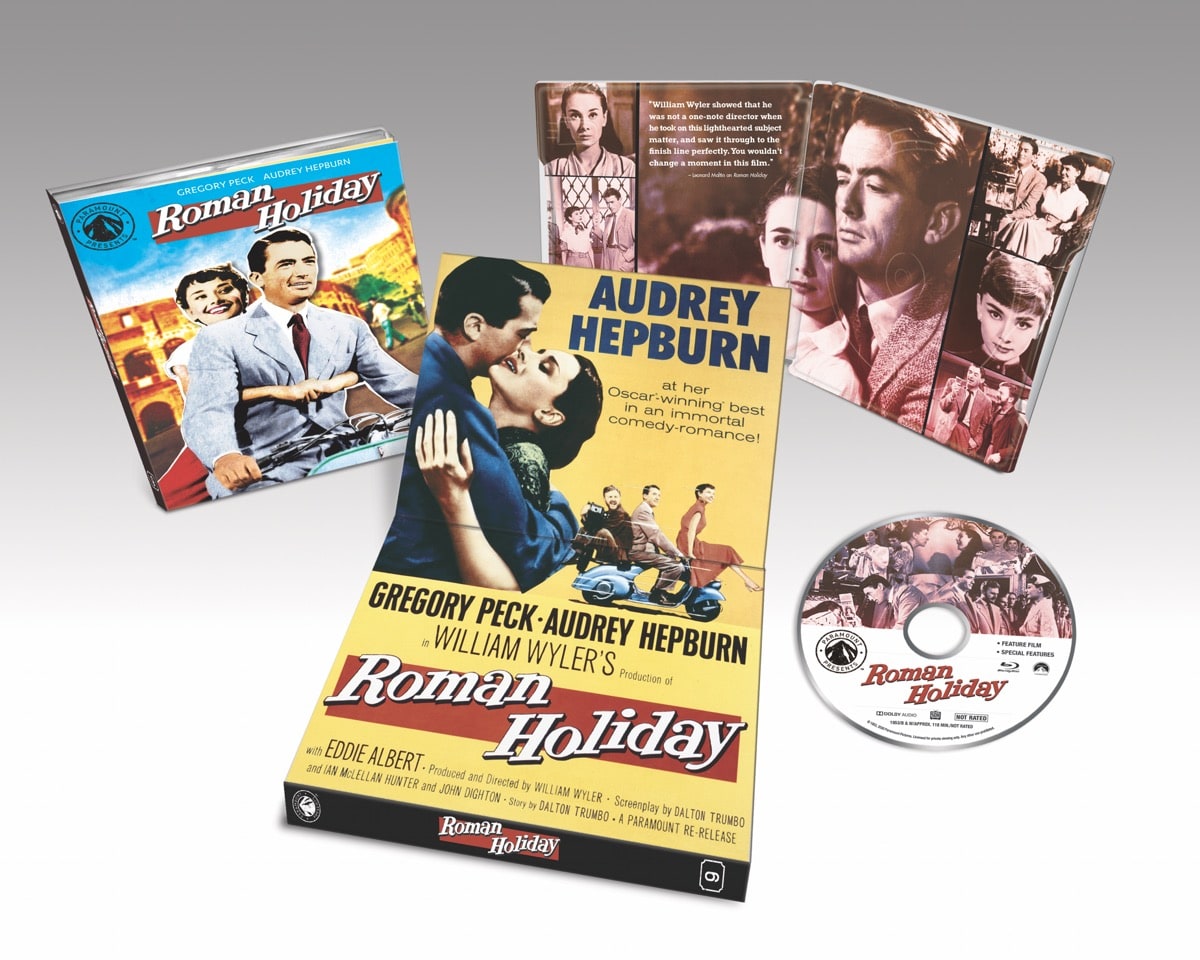 The treasured and enduring classic ROMAN HOLIDAY debuts on Blu-ray for the first time ever as part of the Paramount Presents line on September 15, 2020 from Paramount Home Entertainment.

The exquisite Audrey Hepburn lights up the screen in her first starring role opposite the charismatic Gregory Peck in this funny, beautiful, and intoxicating romantic comedy.  Ranked as the #4 greatest love story of all time by the American Film Institute, ROMAN HOLIDAY earned 10 Academy Award® nominations, including Best Picture, and won Best Actress for Hepburn, Best Costume Design for legendary designer Edith Head, and Best Writing for Dalton Trumbo.

Director William Wyler’s 1953 fairy tale was one of Hollywood’s first on-location motion pictures and memorably captures the bustling streets and iconic sites of Rome.  ROMAN HOLIDAY expresses the exhilaration of joyously breaking free as the lead character escapes her royal obligations against the backdrop of post-war Europe embracing long-awaited peace.

Screenwriter Dalton Trumbo was blacklisted for refusing to cooperate with the House Un-American Activities Committee and his name was not included in the film’s original credits.  In 1992 the Board of Governors of the Academy voted to finally credit Trumbo for the “Story Writing” Oscar and his widow received a statuette in 1993.  In 2011, the WGA restored Trumbo’s name to the screenwriting credits.  This is the first physical home entertainment release to correctly credit Dalton Trumbo with both the screenplay and story by credits both on packaging and the film itself.

The original negative was processed at a local film lab in Rome and was unfortunately badly scratched and damaged.  The film had to be pieced back together, but the splices were so weak due to the damage that extensive amounts of tape had to be used to allow the negative to make it through a printing machine.  Because of the fragile state of the negative, a Dupe Negative was made and then blown up a few thousandths of an inch to cover all the splice tape that held the original negative together.

In anticipation of this new Blu-ray release, the film was digitally restored using the Dupe Negative and a Fine Grain element to capture the best possible image.  Every frame was reviewed, and the film received extensive clean up to remove thousands of scratches, bits of dirt, and other damage.  Because audio elements to properly up-mix to 5.1 do not exist, the original mono track was remastered, and minor anomalies were corrected.  The result is a film returned to its original vibrancy and beauty that remains true to director William Wyler’s vision.

The limited-edition Paramount Presents Blu-ray Disc™ is presented in collectible packaging that includes a foldout image of the film’s theatrical re-release poster, and an interior spread with key movie moments.  Newly remastered from a 4K film transfer, the ROMAN HOLIDAY Blu-ray also includes a new Filmmaker Focus with film historian Leonard Maltin, access to a Digital copy of the film, as well as previously released featurettes on Academy Award®-winner Audrey Hepburn, Edith Head’s Oscar®-winning* costumes, the blacklisting of screenwriter Dalton Trumbo, and much more.