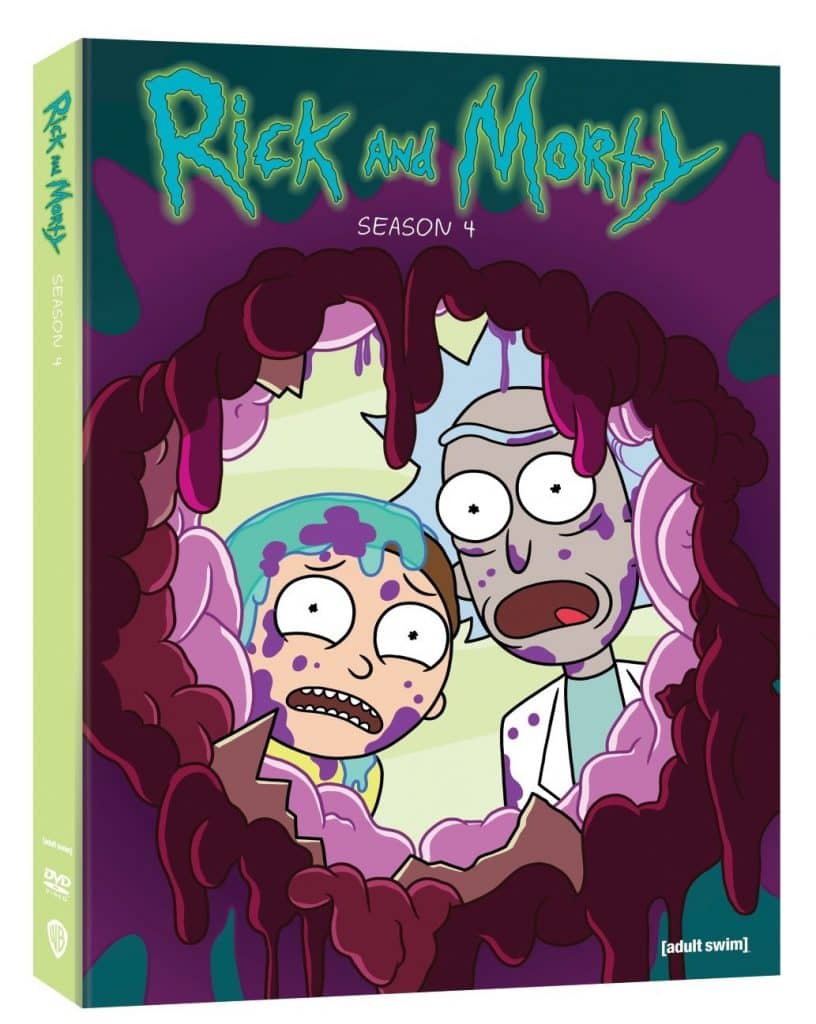 America’s favorite crazy scientist and his grandson return for more misadventures when the latest season of Adult Swim’s hit series Rick and Morty Season 4 arrives on Blu-ray and DVD on September 22, 2020. From creators Justin Roiland (“Adventure Time”) and Dan Harmon (“Community”), go on an intergalactic journey across the multi-verse with the award-winning comedy, featuring all 10 episodes from Season 4, and outrageous bonus content including A Day at Rick and Morty: Inside Season 4, Inside the Episode for every episode, Creating Snake Jazz, and more. Rick and Morty: Season 4 is priced to own at $24.98 SRP for the DVD ($29.98 in Canada) and $29.98 SRP for the Blu-ray ($39.99 in Canada), which includes a Digital Copy (U.S. only). Rick and Morty: Season 4 is also available to own on Digital via purchase from digital retailers.

Buckle in for disappointment because there’s no way these episodes will be good enough for how long you waited. But maybe they will be? It’s season four! It’s sexy and smooth. Buckle in! Did I already say that? Definitely stay buckled in.

“Rick and Morty remains a ratings leader for Adult Swim and retains an enormously loyal fan base season after season,” said Mary Ellen Thomas, WBHE Senior Vice President, Originals, Animation & Family Marketing. “The award-winning series that has spawned comic books, video games, tabletop games, merchandise, music videos and more brings fans a hilarious fresh slate of exciting adventures this season that is sure to get bring laughter into your homes!”

With Blu-ray’s unsurpassed picture and sound, Rick and Morty: Season 4 Blu-ray release will include 1080p Full HD Video with DTS-HD Master Audio for English 5.1. Featuring all 10 episodes from the fourth season in high definition, as well as a digital code of the season (available in the U.S. only).

DIGITAL
Rick and Morty: Season 4 is available to own on Digital. Digital allows consumers to instantly stream and download all episodes to watch anywhere and anytime on their favorite devices. Digital is available from various retailers including iTunes, Amazon Video, Google Play, Vudu, PlayStation, Xbox and others. A Digital Code is also included in the U.S. with the purchase of specially marked Blu-ray discs for redemption and cloud storage.

BONUS FEATURES
A Day at Rick and Morty: Inside Season 4
Inside the Episode for each episode
Creating Snake Jazz
Directing Rick and Morty
Samurai and Shogun
Prop Process
Character Creation
Animation Challenges