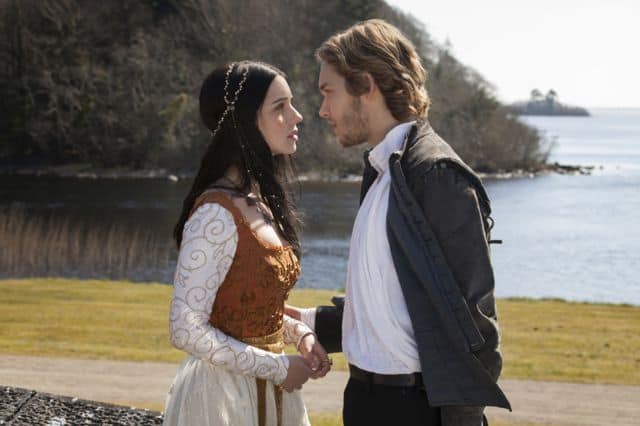 The CW’s newest series is called REIGN. It’s an historical drama about Mary Stuart, Queen of Scots (Adelaide Kane, Teen Wolf). As the tale begins, an assassination attempt is made on Mary, who is living in a nunnery, so she is sent to France, where the boy she is engaged to, Prince Francis (Toby Regbo, Mr. Nobody), and his family is, some of her countrymen and women joining her. Will they protect her, or will they be her undoing?

As far as costume dramas go, it seems it’s become pretty easy to make one. REIGN has sets and costumes just as good as its cable brethren, The Tudors, The Borgias, and White Queen, at least to the untrained eye. The production looks like it is actually set long ago, and it feels as authentic as other shows covering that sort of era.

But there isn’t a lot that will set REIGN apart from those other shows. Actually, it’s more tame, as violence must be shown sparingly, with a beheading only briefly glimpsed, having mostly happened offstage. The sex is watched behind a curtain, with no skin bared, given the restrictions the FCC places on broadcast television. And the cursing is pretty much absent.

Other than that, though, REIGN seems a lot like everything else in its genre. It presents the same sort of characters, the same kind of intrigue, the same type of betrayal and trysts. Is it historically accurate? Probably not. But there is a group of people making television today that likes to take actual people from the past and heighten the story for the sake of getting viewers.

Puzzlingly, all of the characters seem to speak with an English accent, with no distinction made between the Scots and the French, neither of which should speak in this manner anyway. It’s almost like those making REIGN think that all people of the past spoke the same, and it definitely detracts from the believability of the piece.

The reason for this is likely that REIGN is airing on the CW. It’s a stretch to expect the network’s target audience for such fare, teen girls, will be into a show like this anyway. Perhaps not having strong, national accents may make it more accessible to such viewers, though I can’t really imagine how, unless said viewers like bad stereotypes reinforced.

In keeping with the CW style, Mary has two men who will compete over her affections. Francis doesn’t care for her at first, though he will surely come to, but Francis’ bastard brother, Bash (Torrance Coombs, The Tudors), is enamored. Also, Mary has four girlfriends (relative newscomers Celina Sinden, Caitlin Stasey, and Jenessa Grant, and The Chronicles of Narnia’s Anna Poppelwell), ladies-in-waiting, who are both her pals and competitors at times for love.

Does it make sense for a queen to be so friendly with her servants? Of course not. But aside from a bit of clumsy dialogue to build a rift, which will certainly be healed, that’s the relationship painted. It’s a shame REIGN has to play to the teenage element, but then again, it’s only a mediocre series anyway, so this doesn’t detract that much.

Francis’s family is the one we meet, since Mary’s is presumably far away. His father, King Henry (Alan Van Sprang, King), sets a poor example in fidelity, leaving little wonder why his son grew up to be a jerk. Francis’ mother, Queen Catherine (Megan Follows, Anne of Green Gables), is painted as evil, but considering her advisor, the infamous Nostradamus (Rossif Sutherland, also King), tells her Mary will lead to her son’s death, she should be forgiven, even if the story doesn’t seem to do so.

Adding Nostradamus into the tale, especially considering that he is not the forty years older than Mary that he should be, seems forced. Yes, Nostradamus did deliver a prophecy concerning Mary, but their connection was not strong, as far as I could find in a few minutes of using google, so REIGN is building a bridge where there doesn’t necessarily need to be one. I guess Nostradamus is a larger-than-life figure, though, so perhaps they thought he himself would be a draw for the show.

My conclusion is that REIGN is almost as good as the cable costume dramas, which is still only middling compared to most other shows, but toned down, and with a bit of the CW staples dragging it further. I doubt it will connect with young audiences and succeed, and on the CW, most of those who would enjoy it likely won’t find it or give it a chance.