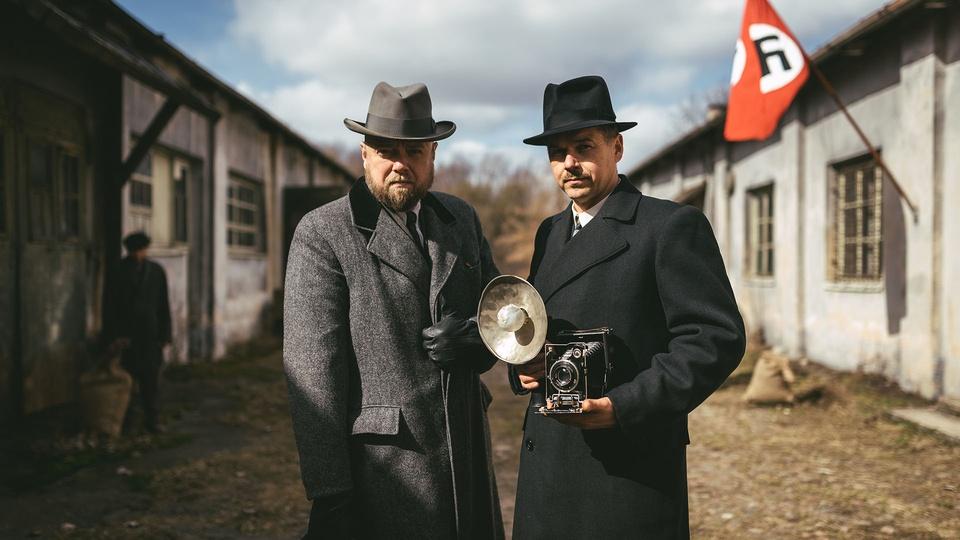 RISE OF THE NAZIS, a new three-part forensic examination of how Adolf Hitler and the Nazi Party seized power in 1930s Germany, will premiere on PBS on Tuesday, November 10 at 9:00 p.m. ET (check local listings). The series, which melds dramatic reconstruction with archival footage and interviews with historians, offers an intimate analysis of how the country’s liberal democracy was transformed into a violent dictatorship in four short years.

Narrated by Kate Fleetwood, the series documents how the Nazification of Germany in the early 1930s was helped by the miscalculations of politicians who believed they could control the demagogic Hitler and his followers even as they radically remade German society. The program also reveals the power struggles between prominent Nazis as they transformed Germany into a ruthless police state, allowing Hitler to elevate himself from Chancellor to the dictatorial Führer of the Third Reich.

Historians and experts, including Professor Sir Richard Evans, General Sir Mike Jackson, Baroness Helena Kennedy QC and Ash Sarkar, take viewers inside the minds of key historical figures of the time to explore what may have motivated their actions. Each episode reveals one of the many resistance stories from this period.

RISE OF THE NAZIS is a particularly poignant look at the fragility of democracy and the institutions that are intended to protect it, examining the individuals and establishments that quickly collapsed as Hitler and his allies further consolidated their power.

The first episode takes us into the corridors of power, where the rising firebrand Adolf Hitler sees an opportunity to use the political turmoil of a hung parliament for his own ends. This sets off a chain of miscalculations by opponents, backroom deals and power grabs that send Hitler from the fringes of politics into the heart of government.

Hitler wants to become absolute leader of a single-party German state. Standing in his way are democracy and the rule of law. After leading a failed coup in 1923, Hitler decided on a new strategy for taking power. Instead of being revolutionaries, the Nazis will become a mainstream political party, operating under the veneer of legality.

To achieve his goal, Hitler must overcome Germany’s political elite, including President Paul von Hindenburg, who looks down on him. Behind the scenes, political mastermind and right-wing political rival Kurt von Schleicher decides he wants to use Hitler for his own ends.

While this political intrigue plays out at the highest level of government, Hitler faces another obstacle at ground level: a Jewish lawyer named Hans Litten, who is out to prove that the Nazis are far from the legal, legitimate party they claim to be.

The second episode finds Hitler as the Chancellor of Germany but without absolute power – there is still a democratic parliament beneath him and a head of state above him. He calls for a general election to increase Nazi representation in the Reichstag as Herman Goering uses the party’s paramilitary group, the Storm Troopers, to isolate the left-wing opposition, pinning the blame on the Communists for a fire in the Reichstag. The fear of left-wing violent lawlessness helps Hitler push through another law to suspend democracy. Soon, the first laws to restrict the freedom of the Jewish population are passed.

In the final episode, Hitler consolidates his power, suspends democracy and brings all of Germany under Nazi control. But to gain absolute power and control of Germany’s military, Hitler must be named successor to the aging President Hindenburg before he dies.

In order to convince Hindenburg to hand him the keys to ultimate power, Hitler must fight a decisive battle for the soul of the Nazi Party. Ernst Röhm, leader of the Nazi Stormtroopers and Hitler’s close friend, wants to take control of Germany’s military for himself by launching a revolution against the old order, to which Hindenburg belongs. Heinrich Himmler and Hermann Göring join forces to take on Röhm.

Meanwhile, conservative radical Edgar Jung challenges Hitler’s power by writing a speech that tells Germany the truth about Nazi government. These intrigues come together in a climax where Hitler defeats his enemies at once in the Night of the Long Knives.