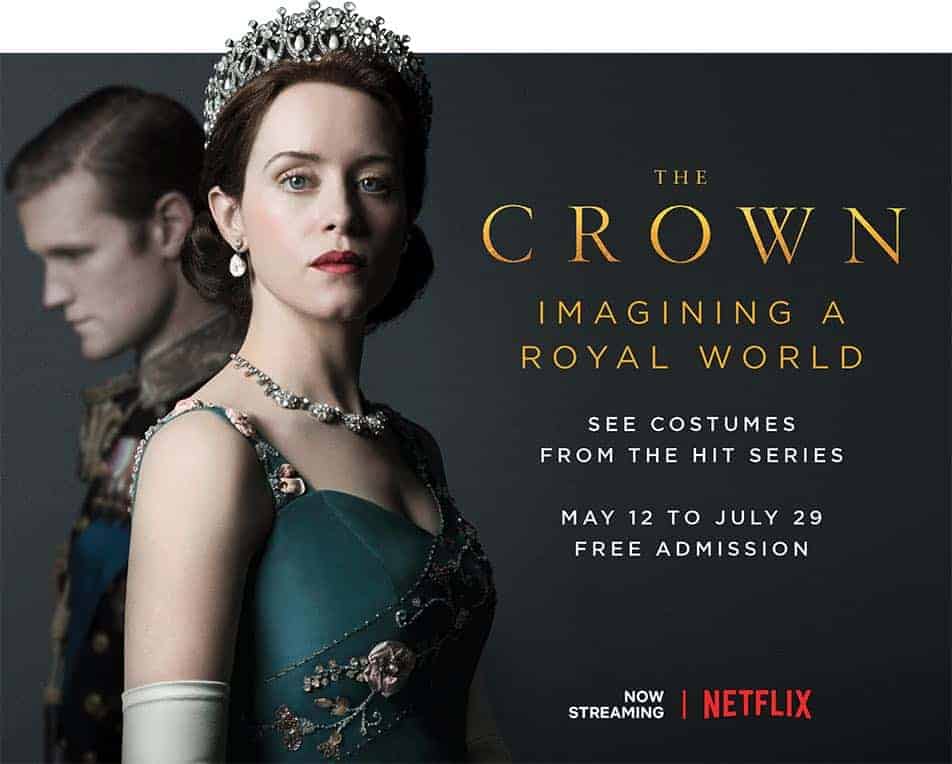 The Paley Center for Media in Beverly Hills will take visitors inside the world of the British royal family when it unveils the multimedia exhibit The Crown: Imaging A Royal World on Saturday, May 12 at its Beverly Hills location. The illustrious exhibit, which is free and open to the public, will run until July 29.

Netflix’s The Crown follows the political rivalries and romance of Queen Elizabeth II’s reign and the events that shaped the second half of the 20th century. The show, produced by Left Bank Pictures in association with Sony Pictures Television,  was an immediate hit with critics and audiences upon its November 2016 premiere and has won multiple Emmy® and Golden Globe awards, including a Costume Designers Guild Award for Jane Petrie, costume designer of the second season.

The Crown: Imagining a Royal World offers an extraordinary glimpse into the creative process behind some of the series’ most stunning and iconic costume creations. With an acute eye for sumptuous detail, renowned designer Jane Petrie’s opulent costumes for season two of the award-winning Netflix period drama explore a transitional time in the monarch’s history—London in the swinging ‘60s with all the seismic cultural shifts and social upheaval of the period. The exhibition will highlight the juxtaposition of a Monarchy somewhat trapped in time against the more modern vision of the United States represented by John F. Kennedy and Jacqueline Kennedy upon their visit to Buckingham Palace in 1961. On-set photography and video clips from the acclaimed series will provide a stunning backdrop for the lavish period costumes on display.

Every year the Paley Center presents exhibits that capture the unique combination of artistry and entertainment, and give visitors a behind-the-scenes look at the creative process that brings their favorite television programs to life. These unique and immersive exhibits are free and open to the public.

“Queen Elizabeth II has captivated the public since the moment she ascended the throne and The Crown captures the magic of her reign,” said Maureen J. Reidy, the Paley Center’s President & CEO. “The Crown: Imagining a Royal World will offer visitors a rare look at the artistry behind this groundbreaking series as well as show why the public’s fascination with the British royal family continues to this very day,”

“Designing the costumes for The Crown has been an incredible privilege, and being able to present some of my favorite designs at The Paley Center for Media is just fantastic,” said Jane Petrie, Season Two’s award-winning costume designer. “Season Two is all about the Windsor’s struggle to modernize at a time of great global change. From Princess Margaret’s exciting new love interest, to the Kennedys swooping into Buckingham Palace, outshining the Queen and her consort, the clash between old and the new, America and Britain, takes center stage and very much inspired the costumes. It’s a fascinating moment of our shared history and was an absolute pleasure to design. I just hope visitors will appreciate the exhibit as much as we enjoyed telling this story.”