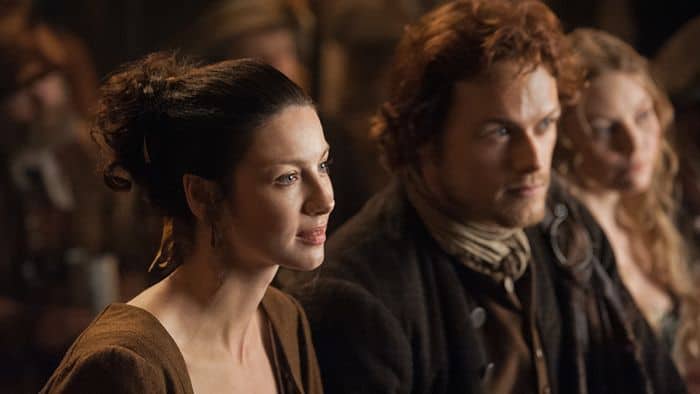 This week’s installment of Starz’s OUTLANDER is called “The Way Out.” Claire (Caitriona Balfe) is starting to adjust to her new life, but still yearns to go home. She figures the best way to do so is to first earn favor with Colum (Gary Lewis), which she slowly but surely works on doing. However, her acceptance of the strange customs of the time is tested when she is prevented from helping a sick boy due to others’ superstitious beliefs.

Most of “The Way Out” is Claire trying to be a good medic to earn Colum’s favor. We get a little humor as she examines the old remedies, some of which are definitely no good, but mainly, it’s a question of keeping her head down, which Claire struggles to do. She is a strong-minded, independent woman who has her own ideas about things. When she knows better than the people around her, being from a more advanced time, she finds it hard not to speak up and challenge the status quo.

I think anyone in her situation would have the same issue. It makes sense for Claire to grapple with this because her natural instinct is to help. Keeping quiet means allowing suffering to go on that she can stop, and in one instance, possibly allow a boy to unnecessarily die. How many could stand by when they have the tools to offer assistance? Claire, like I believe most people to be, isn’t nearly selfish enough to mind her own business.

I believe the opening of “The Way Out,” in which we see Frank (Tobias Menzies) saying goodbye to Claire by her train, is meant to reinforce the type of “modern” woman Claire is, their roles reversed as she goes off to war. But I also feel the sequence is highly unnecessary. Its two main purposes, establishing Claire’s personality and reminding us of Frank and Claire’s love, have already been plenty illustrated in the first two episodes, meaning week three doesn’t have to show us such a repetitive scene.

The question is, how much will Claire’s butting-in cost her? She has allies like Jamie (Sam Heughan) and Mrs. Fitz (Annette Badland) to help cover her back for now, but someday soon her luck will run out. Her best chance at making it through this is to win Colum’s favor first, as he is a much more powerful friend to have on her side than either of the other two, kind as they may be.

She also may need to trust someone, as Claire is definitely have a hard time keeping her secret. She considers confessing to Mrs. Fitz, but the fantasy sequence shows us how wrong that could go, and in retrospect, would have prevented Claire from saving the woman’s nephew, so it’s good she doesn’t do so. The only character in this world that might understand Claire’s story is Geillis (Lotte Verbeek), but the opportunity to tell her hasn’t presented itself, not from lack of trying on Geillis’ part.

It seems certain that Geillis already knows at least part of the tale. She is acting very sketchy in “The Way Out,” pushing Claire for answers and making several comments that could be construed as knowing more than she lets on. Given Geillis’ connection to the supernatural world, she may either be involved in bringing Claire to the past, or, at the very least, know something how it happened. She’s not likely to be trustworthy, but she may be able to provide knowledge, whatever her motivations.

The other movement on this long-range plot is when Claire hears a storyteller speak of a woman who traveled to another place after touching a stone, then got home again the same way. It’s preposterous that Claire didn’t think of trying to return to her time by performing the same action that swept her here, so this isn’t needed, but because it gives Jamie and Claire more time to bond, it works within the episode. Of course, surely simply touching the stone won’t work because OUTLANDER would end pretty quickly if that’s all it took for Claire to get home.

A couple of missteps in “The Way Out” slow down the pacing, but overall, it’s another enjoyable episode. Maybe asking Claire to confront the ‘magic’ of the past is predictable, but it’s also necessary and well done, these people living in barbaric ways compared to what Claire is used to. I still like the characters and that’s why I’m not rooting for Claire to make it back to Frank too quickly, but eventually, that has to be the ending.