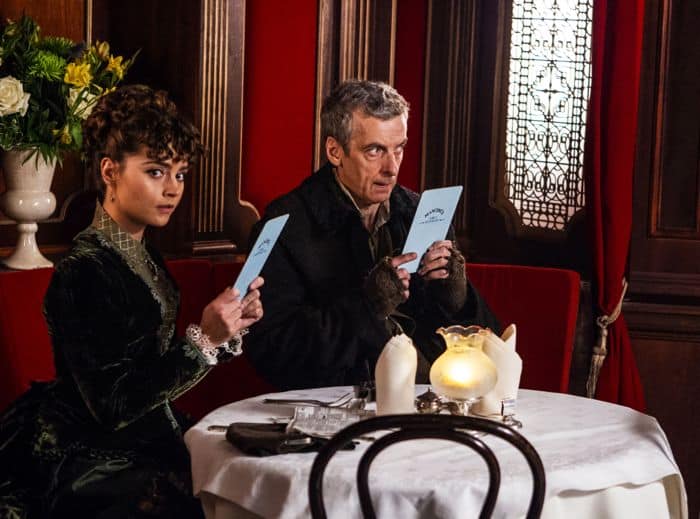 Last night saw the return of the BBC’s DOCTOR WHO in spectacular fashion. Beginning with a dinosaur in Victorian London, the beast spits up a blue box that contains Clara (Jenna-Louise Coleman) and The Doctor (Peter Capaldi, The Thick of It, World War Z), the latter bearing a new face. As the mad doctor runs off into the night, Clara relies on some old friends to not only help her figure out how to handle the Time Lord, but also investigate the murders plaguing the city.

This episode, entitled “Deep Breath,” feels a little off to me as compared to other installments. I suspect the main issue is the increased role of Clara, a character I find annoying and will be happy when she departs. With The Doctor dealing with swirling memories while trying to settle into his new form, Clara has the monumental task of driving events, meaning much of the running time is spent focused on her with less of the maniacal energy of The Doctor, which usually distracts from her. I hope future episodes get better.

That being said, there is a lot to get excited about in “Deep Breath.” I always love The Paternoster Gang, and am pleased to see them carry over to a new doctor’s tenure. Strax (Dan Starkey), frequently hilarious, is in rare form in the season premiere. He gets in some terrific one-liners in his seemingly-naïve way. Jenny (Catrin Stewart) and Madame Vastra’s (Neve McIntosh) romance continues to develop, showing us both their strengths and their weaknesses. When Vastra and Clara’s interactions begin to be charged, Jenny gets a rare moment of rising above Vastra, triumphant and fun. When will the trio get their own spin-off already?

I also really like Capaldi’s Twelfth Doctor, even though we haven’t really seen who he is yet except in brief glimpses. These moments of clarity, a peek at what’s going on inside the man, are among the best moments of the episode. But the rest of it, where he is off his rocker, is equally well-played. Capaldi manages to capture not only the spirit of the long-lived character, but tie it into the past, providing references to many former versions to the very alert viewer. Shades of Baker and Smith, chiefly, pass through at certain parts of the episode, and this provides cohesion to the series.

Which brings us to the surprise appearance of Smith in his final moments, calling Clara to ask her to help out the new guy. This is sweet because it connects the dots more firmly, showing the bond between the Eleventh Doctor and Clara and the Eleventh Doctor and the Twelfth Doctor. In an hour (plus) where The Doctor doesn’t really feel like The Doctor because of what he’s going through, it’s nice that this is included to help ground things and remind us of what is really happening.

The case of the week was ‘eh’ for me. A lot of people liked it because it ties back into a previous fan-favorite, early Tenth Doctor episode, “The Girl in the Fireplace,” with the return of the clockwork aliens. Personally, I didn’t get into it that much the first time around, and so am equally disappointed at their return. It’s not that they are poorly executed or anything; it’s just that they are so simple-minded, and aren’t even plotting specifically against The Doctor, whereas other foes who do generate a higher level of intensity and danger. The clockwork robots seem much easier to avoid than other bad guys; just stay away from their lair. But that’s just my opinion.

At the end of “Deep Breath,” DOCTOR WHO reveals its next big arc, introducing us to the character of Missy (Michelle Gomez, Bad Education). Is she the TARDIS? A regeneration of River Song, demented again? A regeneration of The Master? Or something else entirely? You’ll have to wait to find out.

DOCTOR WHO airs Saturdays at 9 p.m. ET on BBC America.