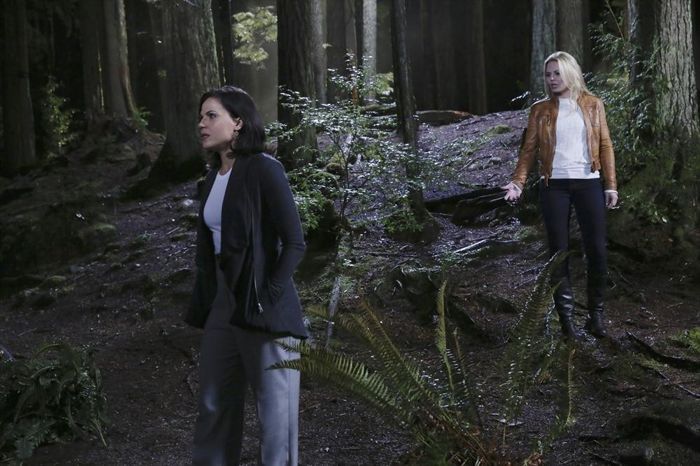 This week’s episode of ABC’s ONCE UPON A TIME is called “Breaking Glass,” a title that doesn’t really fit exactly with the episode. And that isn’t the only strange thing in the mostly entertaining, but occasionally inconsistent, installment which finds a friendship forming, inner strength being found, and a mother learning how to be more than that again.

First, we have Emma (Jennifer Morrison), Regina (Lana Parrilla), and Elsa (Georgina Haig) all on the hunt for the elusive Snow Queen (Elizabeth Mitchell). The Queen has taken to the woods, and when Emma goes to Regina for help, not only does Regina refuse to do so, but the Snow Queen manages to lure the left-alone Elsa into a trap (after Elsa sits in the car for an incredibly unrealistic long time). Emma and Regina become reluctant partners on the trail, until all have a big showdown in which the Snow Queen triumphs.

We still don’t know the Snow Queen’s plan, but it involves getting Regina’s pocket mirror in order to complete a larger mirror in her lair. Incidentally, this also allows Sidney (Giancarlo Esposito) out of his entrapment when he switches allegiances, but the Snow Queen doesn’t really want him, and it’s certainly too late for him to go crawling back to Regina, so he’s left a bit adrift. But back to the Snow Queen, it’s all ice and mirrors as she plays with everyone, accomplishes her goals, but reveals nothing to the of herself to the characters or the viewers.

The Snow Queen seems interested in Elsa, whom we know is her niece, though Elsa isn’t aware. The Snow Queen gets Elsa out of the way so she can attend to the task at hand, but when Elsa is able to break free, the Snow Queen seems proud. My guess is that the Snow Queen would like to help Elsa, but only if she proves herself worthy of her attention, and Elsa is well on her way to doing so. However, the help will probably only come if it benefits the Snow Queen, at least in casting Elsa (who really needs to change clothes) as an apprentice and heir-apparent.

The Snow Queen doesn’t seem to care so much about Regina and Emma. True, one could argue that the way the bridge disintegrates is designed to lead the women somewhere rather than to kill them, but the Snow Queen is just a little too careless with their lives to seem like she worries about keeping them alive in any way.

Which makes the revelation that Emma lived with her as a teenager, something the Snow Queen has wiped from Emma’s memory, and that doesn’t quite justify the pointless Emma flashbacks in “Breaking Glass,” all the more puzzling. Why is the Snow Queen interested in Emma, and how did she get out of Storybrooke during the original curse? Or why did she join the town sometime during that curse, as seen in pictures?

The welcome outcome of this ONCE UPON A TIME adventure is that Emma and Regina acknowledge something like a friendship. I do feel like Regina shuts Emma down too much, even in keeping with her character, and the way that Emma sees Regina as a much-needed friend comes out of nowhere, not satisfactorily answered in the flashbacks. But “Breaking Glass” gets the women to a place they need to be, on the road to a real relationship, and that is very moving.

Regina needs Emma’s friendship as much as Emma needs Regina. The latter reasons are obvious, as Emma could use some help with her magic. The former may be less so. Regina is losing her humanity, treating Sidney like a pawn again and considering dark options, even as she doesn’t go through with them. Henry’s (Jared Gilmore) faith in his adopted mother helps keep Regina good, but an adult friend, one who can see through the bull in a way Henry can’t, as well as someone whose faith in her that Regina doesn’t expect, can help Regina even more. Emma is important in Regina’s redemption sticking and continuing forward.

Another great scene is a small one in which Hook (Colin O’Donoghue) shows interest in Emma’s past. This romantic, compassionate Hook doesn’t quite gel with the schemer seen last week, but it is the Hook fans want, and the Hook that Emma deserves. Hopefully, ONCE UPON A TIME will give us more of this Hook and less of the other one.

Elsewhere, Mary Margaret (Ginnifer Goodwin) thinks David (Josh Dallas) leads her on a wild goose chase after the escaped Will Scarlet (Michael Socha) in order to get her groove back. It turns out not be a trick by David, but the side story is a good use of Mary Margaret and David, usually flat, uninteresting characters, and the more Will can be worked into the story, even if his narrative is unfolding as fitfully as the Snow Queen’s, the better.

ONCE UPON A TIME is having a rough fall, better than last spring’s batch, but lacking the cohesiveness and the rich layers of the previous autumn’s Neverland arc. “Breaking Glass” does much to get the show back on track, but unfortunately, in doing so, it has to stray from some established bits in recent weeks. Here’s hoping ONCE figures out what it needs to do and sticks with it in time to salvage this story.