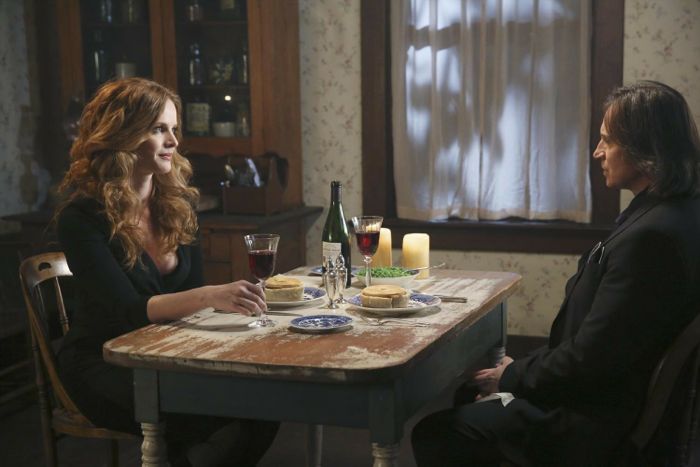 Tonight’s ONCE UPON A TIME, “Bleeding Through,” finally reveals Zelena’s (Rebecca Mader) fiendish scheme as Regina (Lana Parrilla), Snow (Ginnifer Goodwin), and their comrades look to the past for answers. Zelena plans to do what has not been done before – travel back in time and change things. But to do so, she will need one more important key ingredient: Snow and Charming’s (Josh Dallas) unborn baby.

The formula of brains, heart, and courage is one familiar to Wizard of Oz fans. Zelena has Rumple’s (Robert Carlyle) mind under her control, has swiped Charming’s courage, and now uses Robin Hood’s (Sean Maguire) son as leverage to obtain Regina’s heart. This doesn’t feel like a trip down the yellow brick road, which is disappointing to fans of the Emerald City, but at least there is some cohesion as the plot moves forward, tying ONCE UPON A TIME to the marvelous land of Oz.

Why a baby, though? Does the infant represent Dorothy’s innocence? There have been no hints of gingham dresses about. Or perhaps the past is the home Zelena needs to get to and the child is her ticket there, similar to a pair of silver slippers. Whatever the reason, at least our heroes now know what Zelena wants so they can attempt to stop it.

My only question as this point is why is Zelena being so patient with Hook (Colin O’Donoghue)? She told Hook to take away Emma’s (Jennifer Morrison) magic or Zelena would begin hurting people. Hook has not acted, grumpily arguing with Emma to forestall having to do the deed, and Zelena hasn’t followed up. Why not?

I will say, the flashbacks in “Bleeding Through” are a bit weak in terms of story structure. Young Cora (Rose McGowan) is fleeced by a false royal (David De Lautour, Touch), then tries to cover up her pregnancy mistake by quickly marrying Prince Leopold (Eric Lange, Lost). Unfortunately for Cora, Princess Eva (Eva Bourne, Caprica) interferes, exposing Cora’s lies and winning Leopold for herself.

One problem I have with this is that Eva is supposed to be the good guy, and instead is portrayed as a sneaky brat. Snow thinks this makes the history she and Regina share more complex, admitting that she grew out of her own annoying phase, but that just isn’t how we’ve seen Eva before, and by extension, who Snow has grown into. Secondly, Snow then talks about how Cora is forced to give up Zelena against her will, but from what we see, it’s only Cora’s own selfish desires that necessitate abandoning the baby, and it still isn’t clear why Zelena ends up in Oz. The twister coming along at that moment is too big a coincidence.

There’s also the ick factor that Cora is romantically with Leopold, and even though they don’t consummate anything, Cora’s daughter eventually marries the prince, then a king, herself. Talk about some twisted family relations!

Luckily, the emotional journey Regina goes through in “Bleeding Through” helps make up for this. She reveals some honesty in her assessment of her mother, refusing to condemn Snow for murdering Cora, and even protecting Snow when it looks like Cora’s ghost wants to do her harm. She also shows her great capacity to love, even without a heart, having compassion to Snow and finally kissing Robin Hood. No other character in this universe has been able to love once their heart is taken, and so this makes Regina very special indeed, having the most resilient heart, as it were.

As usual, Parrilla kills the performance. Amid some silly stuff, her tears feel real, and she evokes sympathy in a complicated situation. It would be easy for Regina to be hokey, but Parrilla takes the things that don’t add up about the character and turns them into understandable layers. She comes across as the most mature person on the show, and thus can rise above the squabbles, and even begins apologizing for past wrongs. She is my favorite player on ONCE UPON A TIME for a reason, and “Bleeding Through” gives her yet another opportunity to shine.

Though this current Regina may not quite deserve it, it’s cool to see Belle (Emilie de Ravin) lay into her when Regina asks for help. Many have begun to forgive Regina for what she’s done, seeing first-hand how she has changed. Belle has not had this experience, and her hatred is the exact reaction she should have towards the former Evil Queen. It’s refreshing to get this point of view from someone.

Another scene that stands out in “Bleeding Through” is Rumple’s attempt to seduce Zelena in order to steal back his dagger. She believes him briefly because she is starved for affection, but of course doesn’t let down her guard, hardened as she is. Rumple, for his part, shows how much he’s changed when he respects the sacrifice his son, Bae, made to try to stop Zelena, rather than playing into Zelena’s plan, which could lead to Rumple saving Bae in the past. Rumple is putting the greater good ahead of himself once more, and his interplay with Zelena is both charged and authentic.

“Bleeding Through” hurts itself with going too far into the past and forcing backstory that doesn’t add up. Like McGowan’s previous appearance as Young Cora, the scenes seem forgettable and unnecessary. But solid performances and interactions in the present day save the episode overall, perhaps not ranking it among the best of the show, but certainly not one to ignore, either.

Only four episodes remain in ONCE UPON A TIME’s third season. It continues Sundays at 8 p.m. ET on ABC.