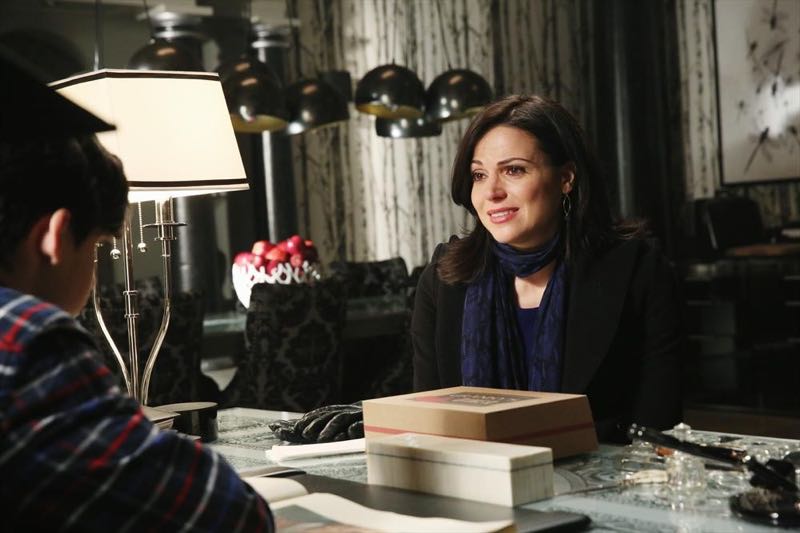 We should have known that there was much more to the story of Maleficent (Kristin Bauer von Straten) than Season 1 showed — and what a doozy it is!  No wonder Maleficent was on such a war path.  Whenever a child’s life is at stake or has been taken, the parents will always rise up to reign down terror and vengeance on those responsible.  The other big shocker was seeing how quickly Belle (Emilie de Ravin) has moved on in her life and struck up a romance with Will Scarlet (Michael Socha).  Like Maleficent, Rumple (Robert Carlyle) has had someone he loved stolen from him and his vengeance will know no bounds.  It is even more terrifying to see how unaware Belle and Will are of the danger that they are now in. Then while no specifically spelled out yet, ONCE UPON A TIME continues to hint that Emma (Jennifer Morrison) is at risk of falling to the dark side herself.  Just which dirty secret will it be that pushes her over?  Shall it be Hook’s (Colin O’Donoghue) dark past with Ursula (Merrin Dungey) or discovering her parents are not as good-hearted and innocent as she thought?

At a special press screening, creators and executive producers Adam Horowitz and Eddy Kitsis talked about the baby reveal, Hook and Ursula’s history, and the threat to Emma’s soul.

EDDY:  At the end of the second episode, you realized Maleficent is not just a villain, she is a mother trying to protect her kid.  If you rewatched episode 413, and watch everything she is doing, hopefully, it gives more depth to it.

EDDY:  Any time you have your heart broken, you look for a way to smile again.  I think we hinted that Will leaving Wonderland had some heart-break.  Belle has clearly had some heart-break and you are seeing that they have a lot in common.  They both fell in love with villains.  They both hoped that these villains would be redeemed.  Will had fallen in love with the Red Queen and she changed and he saw the woman beneath the monster.  It is the same with Belle.  So they have a lot in common.  What we loved about Belle in the winter finale was she was kind of like, “It’s enough.”  It is enough lying and at some point you have to stop giving people the benefit of the doubt.  You have to say, “Change or f*ck off” — and we loved that strength from Belle.  We love her moving on because if you look at Belle as a character — remember, she volunteered to save her town because her father wouldn’t let her be a hero — so she became the maid and then she became his wife, and she hasn’t really lived.  So for us, it is kind of like if you got married at 21 and now your 32 and you kind of might think, “Maybe I want to live again.”

ADAM:  Belle has to be strong.  One of the things that happened in that relationship with Rumple, as his lies grew and his betrayals grew, the audience was seeing that Belle was unaware of any of it and we really wanted the first half of the season was her to react to that discovery and act out of strength.  If they are to have any chance of being together, she has to be the stronger person.

EDDY:  What we also liked was how upset people were with his behavior.  Yet he warned us in “Skin Deep”:  “I am a difficult man to love” and we just didn’t want to believe it.  So what we love is even the fans are like, “No!  Yeah, he’s killed a lot of people and yeah, he told us he was a liar and always chooses power over love, but that was different.”  But it’s not.

EDDY:  For Emma, right now, the two people she trusts most in her life are lying to her and she’s suppressing that.  So finding that out will be kind of a bummer.  Emma is going to have to confront her past in a lot of different ways.  She’s done a lot of growing over the past three seasons — and what happens when the person who is helping you grow might be actually as bad as the people you were trying to get away from?. . . I would say that Henry (Jared Gilmore) would do his best to keep her on the good side of the force.  I think that Henry is the heart of the Truest Believer, so the Truest Believer always believes in you — even when you are maybe going down a wrong path.

ADAM:  For the last couple of seasons, we have seen a lot of our villains, like Regina and Gold, go on a redemption arc.  We’ve seen them start off really bad and try to fight those urges and be their better selves, to varying degrees of success.  What we wanted to do is start to explore the idea with our heroes — and I think we see this throughout the show — that things are not just clearly black and white, and I think you will start to see — obviously with Snow (Ginnifer Goodwin) and Charming (Josh Dallas) that is happening — and it will start to effect Emma as well.

EDDY: [Emma] knocked on [Regina’s] door and said, ‘I want to be your friend. I want to get your happy ending as well,’ and then she joined up with Operation Mongoose.  Regina (Lana Parrilla) was kind of like, ‘That’s great, but I like your mom more.’ Regina has not been that open to her friendship, but I think we’re going to see that change in a little bit — whether or not they can be friends is kind of what we’re going to see in the second half.

ADAM:  Given what Emma is starting to go through and what Regina has gone through, there is a new common ground between the two characters.  I think they will build on that friendship.  In addition to Henry, now there is something else that they can share and deal with.

Hook’s Past With Ursula

EDDY:  Episode 415 explains what he did to her. . . It was not sexual.  It is as Hook said, it is far worse.  So when you think about what would be worse than having your heart broken, I would say it would be having your soul crushed. . . You will see the entire flashback of what happened and the origin of Ursula.

EDDY: There’s going to be some death.

While cagey about whether we will lose yet another fan-favorite character this season on ONCE UPON A TIME, fans and viewers are going to want to be sure to tune in for all the new episodes airing Sundays at 8:00 p.m. on ABC just to be sure.