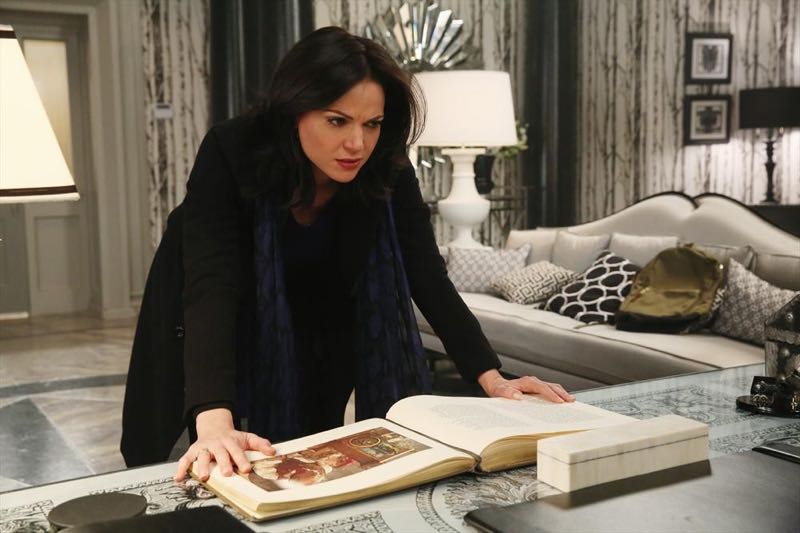 ABC’s ONCE UPON A TIME shows us who is “Unforgiven” in this week’s episode. Mary Margaret (Ginnifer Goodwin) and David (Josh Dallas) try to prevent the resurrection of Maleficent (Kristin Bauer van Straten), knowing she has legitimate beef against them. The problem is, they want to keep the reasons for the feud a secret, and so have to resort to sneaking around to do so, making them vulnerable for manipulation and prone to failure, which is what happens.

I credit Once Upon A Time for seemingly crafting a story that is at least a little meaty for Mary Margaret and David. They are heroes, and as such, rarely do anything bad, minimizing the drama in their lives. “Unforgiven” talks a lot about the bad thing they supposedly did, which doesn’t seem all that believable, until we learn they did it to protect Emma (Jennifer Morrison). Emma is their precious daughter, a person that could have been a force for great good or great darkness. It’s understandable they may be willing to sacrifice of themselves for her, as many a parent does, taken to the extreme.

The problem is, I still don’t see why they can’t tell Emma their story. She has come to expect nothing less than the truth from them, and that’s what she deserves. If she is going to be a hero, she needs good examples set for her from other heroes, including tales where they screwed up and how they got past it. Besides, if Mary Margaret and David did something bad to save her soul, wouldn’t it stay saved no matter what they tell her now? Is the secret they keep so precarious?

Once Upon A Time refrains from giving viewers everything, still not showing what the couple did, only mentioning that whatever it was caused Maleficent to lose her own baby. This is why Maleficent is mad at them and wants to cause them immense pain, not kill them. I’m intrigued by the mystery, one that seems to stretch the definition of hero and villain, and wonder where the season will go.

“Unforgiven” reveals that Maleficent could perhaps have been a hero once. She tries to team up with Mary Margaret to save the realm and protect her child. This is a noble, selfless act, and she certainly seems ready to bond with her foe in order to do so. Regina (Lana Parrilla) isn’t an anomaly then, the villain who might turn good, and it makes the world even less black and white. What’s more, Maleficent makes this decision in the Enchanted Forest, not our world, where things were more clear cut.

So how will Maleficent make the Charmings pay? I have no idea. She obviously is the leader of the three female witches this season, and so is likely a force to be reckoned with. Whatever she has in mind will not be easy to stop.

And what of Rumple (Robert Carlyle)? His plan still has not come to fruition, and if it was just to get back to Belle (Emilie de Ravin) to talk her into taking him back, that hope is dashed when he sees her with Will Scarlet (Michael Socha). That’s a story that needs more explanation, given we don’t know what’s happened to Will’s love, but I assume that will be dealt with. So what will Rumple be asking the evil ladies to help him with?

At the end of “Unforgiven,” Mary Margaret asks Regina to go undercover with the witches. This makes sense, given Regina is the only one they might accept into her club, assuming they don’t believe she can truly go good. But it risks Regina’s soul, which is still in a precarious position. She is working very hard towards her happy ending and is mostly succeeding, but she snaps at Pinocchio (Jakob Davies). Even as she apologizes to Marco (Tony Amendola) later, who offers her a hint in her quest for The Author in forgiveness, the snap shows just how close to the surface Regina’s dark side continues to be. Yet, should she be able to pull this off, it would definitely go far in solidifying her redemption.

“Unforgiven” is a pretty good episode, with some satisfying relationship moments between Emma and Hook (Colin O’Donoghue), a number of intriguing plot points in the main arcs, and none of the obvious holes that sometimes plague the series. I’m still not sold on ONCE UPON A TIME’s Queens of Darkness half season, but at least they’re not blowing things right out of the gate.