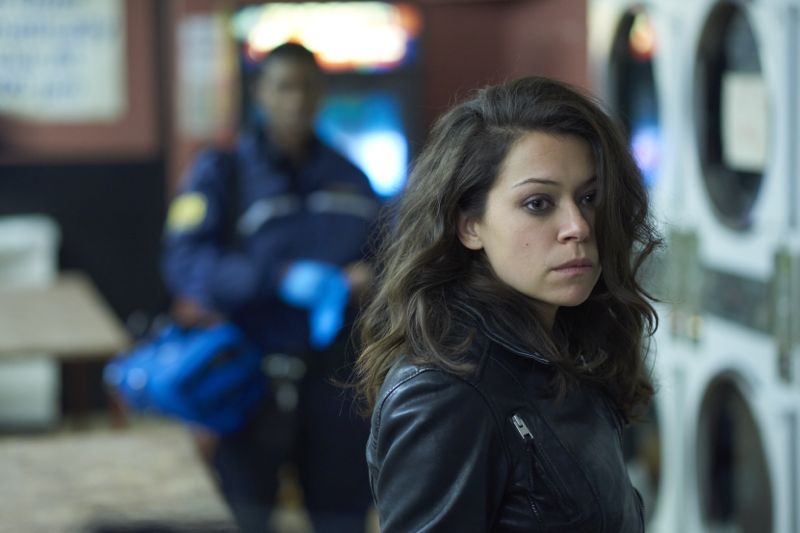 If the only way forward is to go back, then ‘clone club’ is in for a wild ride. BBC AMERICA’s award-winning Orphan Black, starring Emmy® and Golden Globe nominated Tatiana Maslany, returns on a new night and time, Thursday, April 14th at 10/9c.

It all started on a train platform. A troubled woman, Beth Childs (Maslany), locked eyes with an unknown identical woman, Sarah Manning (Maslany), before jumping to her death. From that day on, they’ve been inextricably linked to a clone conspiracy that has come to rule Sarah’s life. Every twist and turn around the maze of this world has led to a new enemy, a new ally, a new clone and always, new questions. How many of us are out there? Who created us? Who is trying to kill us? Why are we sick and how do we survive?  The search for these answers have sent Sarah and her newly-found sisters Alison (Maslany), Cosima (Maslany) and Helena (Maslany) crashing head first into some of the most nefarious foes and life revelations they could’ve ever imagined.  Neutralizing enemies and gaining answers to some of these questions however hasn’t brought them any closer to solving the most important mystery of all – their survival.

Season three plunged the clone sisterhood into dangerous territory when they faced the threat of extermination by multiple forces, including a line of militaristic male clones. While it appeared their tactics left them clear to move forward with their lives, this season, revisiting the past is imperative in determining their future.

The sisters have finally settled into some sense of normalcy. Sarah, reunited with her foster mum Mrs S. (Maria Doyle Kennedy), daughter Kira (Skyler Wexler) and the clone original, Kendall Malone (Alison Steadman) at an Icelandic hideout; Alison, enjoying the spoils of the drug trade with husband Donnie (Kristian Bruun) and helping the once rabid Helena settle into domesticity; and Cosima, hard at work on a cure for her illness with lab partner Scott (Josh Vokey). We find Sarah’s battle-worn foster brother Felix (Jordan Gavaris) accepting that he’s been left behind, and trying to pick up the pieces of his life – post ‘clone gate’; and Rachel (Maslany), the clever self-aware clone reunited with her ‘mother,’ Susan Duncan (Rosemary Dunsmore) and attempting a reconciliation. But peace and calm seldom lasts long with this lot and Sarah’s hard won tranquility is disrupted when she receives a call that thrusts her right back in harm’s way.  A mysterious ally tied to Beth leads Sarah back to where it all started. She’ll follow Beth’s footsteps into a dangerous relationship with a potent new enemy, heading in a horrifying but familiar direction.

Also returning this season is Kevin Hanchard as Detective Art Bell, Beth’s partner who’s pledged his allegiance to her sisters, Ari Millen as a mysterious new Castor clone, the likes of which we’ve never seen before and James Frain as Ferdinand, the intimidating assassin for shadowy organization, Topside.  Joining this season is Joel Thomas Hynes as Dizzy, an edgy hacker who doesn’t conform to group mentality; Jessalyn Wanlim as Evie Cho, a powerful, bioengineer; Lauren Hammersley as Adele, a wickedly-intelligent lawyer with a bit of a drinking problem; Gord Rand as Detective Duko, a mysterious figure with ties to Neolution; and Ian Matthews and Miranda Edwards as Frank and Roxie, Neolution’s clean-up crew.

United in their mission to end the constant threats to their lives once and for all, the sisters are taking matters into their own hands.  No more looking for guidance, permission or consensus on decisions – the clones are taking full ownership…no matter the cost to those around them.  Retracing steps from the beginning will uncover revelations that had been there all along, and will ultimately shake their fragile world to the core.

Orphan Black is co-created by Graeme Manson and John Fawcett, with Manson also serving as writer and Fawcett as director; the series is executive produced by Ivan Schneeberg,David Fortier and Kerry Appleyard.