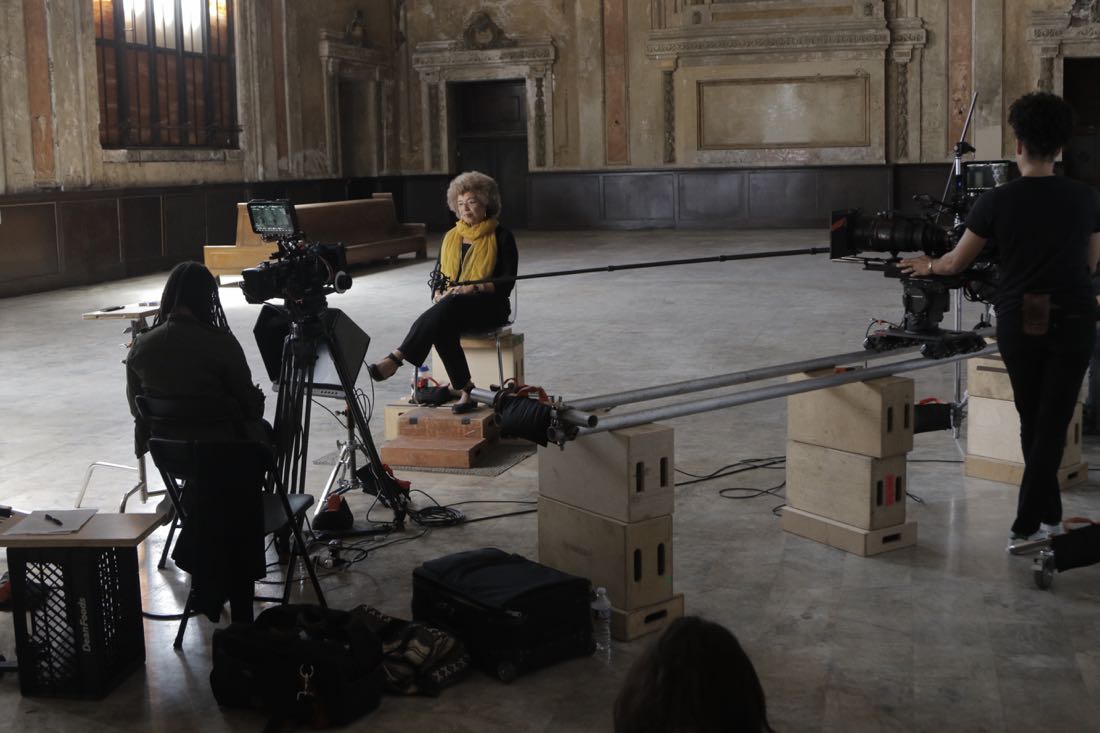 The Film Society of Lincoln Center announces Ava DuVernay’s documentary The 13th as the Opening Night selection of the 54th New York Film Festival (September 30 – October 16), making its world premiere at Alice Tully Hall. The 13th is the first-ever nonfiction work to open the festival, and will debut on Netflix and open in a limited theatrical run on October 7.

Chronicling the history of racial inequality in the United States, The 13th examines how our country has produced the highest rate of incarceration in the world, with the majority of those imprisoned being African-American. The title of DuVernay’s extraordinary and galvanizing film refers to the 13th Amendment to the Constitution—“Neither slavery nor involuntary servitude, except as a punishment for crime whereof the party shall have been duly convicted, shall exist within the United States . . . ” The progression from that second qualifying clause to the horrors of mass incarceration and the prison industry in the U.S. is laid out by DuVernay with bracing lucidity.

New York Film Festival Director and Selection Committee Chair Kent Jones said, “While I was watching The 13th, the distinction between documentary and fiction gave way and I felt like I was experiencing something so rare: direct contact between the artist and right now, this very moment. In fact, Ava is actually trying to redefine the terms on which we discuss where we’re at, how we got here, and where we’re going. The 13th is a great film. It’s also an act of true patriotism.”

From D. W. Griffith’s The Birth of a Nation (1915) and the rebirth of the KKK to the Civil Rights Movement, the 1994 Crime Bill, the rise of ALEC, and the Black Lives Matter movement, DuVernay traces a pattern of fear and division that has consistently driven mass criminalization. With a potent mixture of archival footage and testimonies from leading voices, including Michelle Alexander, Bryan Stevenson, Van Jones, Newt Gingrich, Angela Davis, Senator Cory Booker, Grover Norquist, Khalil Muhammad, Craig DeRoche, Shaka Senghor, Malkia Cyril, Henry Louis Gates, Jr., and a dazzling array of activists, politicians, historians, and formerly incarcerated women and men, DuVernay creates a work of grand historical synthesis.

“It is a true honor for me and my collaborators to premiere The 13th as the opening night selection of the New York Film Festival,” said Ava DuVernay. “This film was made as an answer to my own questions about how and why we have become the most incarcerated nation in the world, how and why we regard some of our citizens as innately criminal, and how and why good people allow this injustice to happen generation after generation. I thank Kent Jones and the selection committee for inviting me to share what I’ve learned.”

“Ava gives us a remarkable and ambitious framework for understanding why the U.S. represents 5% of the world’s population, yet is home to nearly 25% of the world’s prisoners. Her work has been tireless and passion-fueled and has resulted in a sweeping view at a tenuous time. We are honored to provide a global platform for this deeply urgent work,” said Lisa Nishimura, Netflix VP of Original Documentary Programming.

Tickets for the 54th New York Film Festival will go on sale September 11. Becoming a Film Society Member at the Film Buff Level or above provides early ticket access to festival screenings and events ahead of the general public, along with the exclusive member ticket discount. Learn more at filmlinc.org/membership.

For even more access, VIP passes and subscription packages offer one of the earliest opportunities to purchase tickets and secure seats at some of the festival’s biggest events including Opening, Centerpiece, and Closing Nights. VIP passes also provide access to many exciting events, including the invitation-only Opening Night party, “ An Evening With…” dinner, Filmmaker Brunch, and VIP Lounge. Benefits vary based on the pass or package type purchased. VIP passes and subscription packages are on sale now. Learn more at filmlinc.org/NYFF.

2007 The Darjeeling Limited (Wes Anderson, US)

2002 About Schmidt (Alexander Payne, US)

1999 All About My Mother (Pedro Almodóvar, Spain)

1989 Too Beautiful for You (Bertrand Blier, France)

1988 Women on the Verge of a Nervous Breakdown (Pedro Almodóvar, Spain)

The Film Society of Lincoln Center is devoted to supporting the art and elevating the craft of cinema. The only branch of the world-renowned arts complex Lincoln Center to shine a light on the everlasting yet evolving importance of the moving image, this nonprofit organization was founded in 1969 to celebrate American and international film. Via year-round programming and discussions; its annual New York Film Festival; and its publications, including Film Comment, the U.S.’s premier magazine about films and film culture, the Film Society endeavors to make the discussion and appreciation of cinema accessible to a broader audience, as well as to ensure that it will remain an essential art form for years to come.

Nominated for two Academy Awards and four Golden Globes, writer/director Ava DuVernay’s most recent feature “Selma” was one 2015’s most critically-acclaimed films. Winner of the 2012 Sundance Film Festival’s Best Director Prize for her previous feature “Middle of Nowhere,” DuVernay’s earlier directorial work includes “I Will Follow,” “Venus Vs,” and “This is The Life.” In Fall of 2016, her first television series as executive producer, writer and director, “Queen Sugar,” debuts on Oprah Winfrey’s network, OWN. DuVernay distributes and amplifies the work of other people of color and women directors through her film collective ARRAY, named one of Fast Company’s Most Innovative Companies in Hollywood for 2016.

Netflix is the world’s leading Internet television network with over 81 million members in over 190 countries enjoying more than 125 million hours of TV shows and movies per day, including original series, documentaries and feature films. Members can watch as much as they want, anytime, anywhere, on nearly any Internet-connected screen. Members can play, pause and resume watching, all without commercials or commitments.