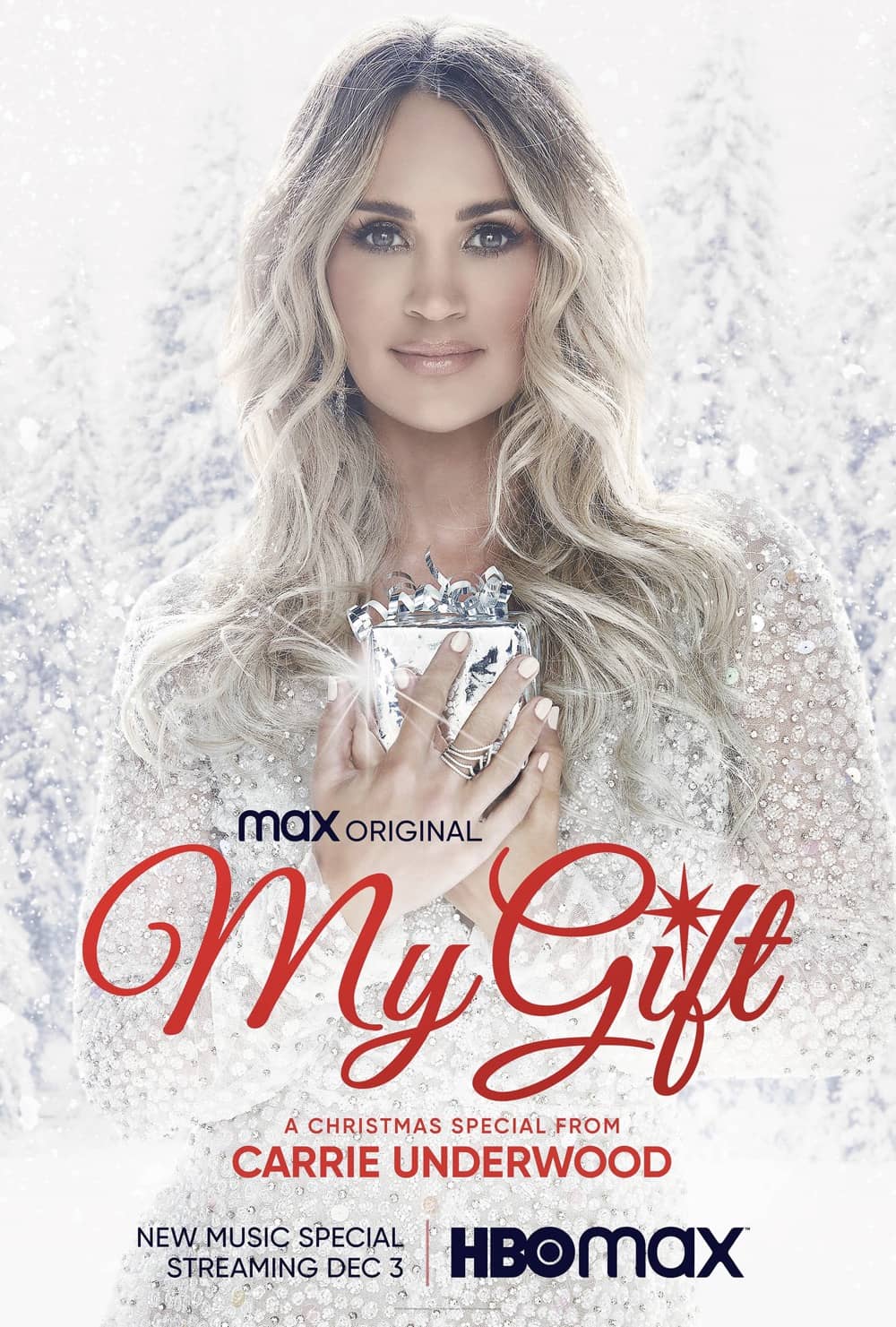 On Thursday, Dec. 3, HBO Max is spreading holiday cheer with the debut of Carrie Underwood’s new music special “My Gift: A Christmas Special From Carrie Underwood.” In the Max Original, Underwood performs a combination of beloved traditional favorites celebrating the joy and hopefulness of the holiday, as well as new original material from her first ever full-length Christmas album My Gift, which was released earlier this fall. On the special, she is accompanied by her band, as well as a live orchestra and choir, conducted by Underwood’s longtime friend, Emmy® Award-winning musical director Rickey Minor.

The special features many heartfelt moments and performances, including a duet with John Legend, singing “Hallelujah,” an original song he co-wrote with Toby Gad, which appears on her My Gift album. Viewers will also get an inside look behind the scenes of Underwood recording “Little Drummer Boy” with her five-year-old son Isaiah.

“My Gift: A Christmas Special From Carrie Underwood” will be available to stream starting Thursday, Dec. 3 on HBO Max.

“I’m thrilled to be collaborating with Playtone and HBO Max to bring My Gift to life,” said Underwood. “Just like the album, I hope this special will help bring some much-needed joy and become part of the soundtrack to people’s holiday festivities this year as it streams throughout the season and beyond.”

“My Gift: A Christmas Special From Carrie Underwood” is executive produced by Gary Goetzman and Tom Hanks for Playtone – which has garnered 52 Emmy Awards and 107 nominations – along with Underwood and her manager, Ann Edelblute. The special is directed by Emmy nominee Sandra Restrepo, with production design by Tom Lenz and wardrobe styling by multiple Emmy Award-winning costume designer Marina Toybina.

“This special is an homage to the classic, timeless holiday specials, highlighting the vocal gifts of the incomparable Carrie Underwood,” said producer Goetzman. “She’s an artist who transcends genres and shows here why audiences love her around the world.”

About Carrie Underwood:
Carrie Underwood emerged from the promise of her 2005 “American Idol” win to become a true multi-format, multi-media superstar, spanning achievements in music, television, film, and now books, as a New York Times bestselling author. She has sold more than 64 million records worldwide and has recorded 27 #1 singles, 14 of which she co-wrote, while continuing to sell out arena tours across North America and the UK. Her 2018 release, Cry Pretty, is her seventh album to be certified Platinum or Multi-Platinum by the RIAA, including her Greatest Hits: Decade #1. On September 25 of this year, Carrie released her eighth album, My Gift, her first-ever Christmas album, which debuted at #1 on the Billboard Country, Christian and Holiday charts in its first week and marked her eighth straight release to debut at #1 on the Billboard Country chart. My Gift also debuted #1 on the UK country chart (her fifth #1 on the chart) and #1 on the Canadian country chart. She also starred as Maria von Trapp in NBC’s three-hour 2013 holiday blockbuster, the Emmy®-winning “The Sound of Music Live!,” whose airings attracted 44 million viewers, and she returns this Fall for her eighth season as the voice of primetime television’s #1 program, NBC’s “Sunday Night Football.” Last November, she hosted the CMA Awards for the 12th consecutive year. Underwood has won over 100 major awards including 7 GRAMMY® Awards, 15 ACM Awards including three for Entertainer of the Year (the first female in history to win twice and, as of 2020, the only female ever to win three times), 22 CMT Music Awards where she continues to hold the record for the most award wins ever for the show, 7 CMA Awards, and 15 American Music Awards with her 7th win for Favorite Female Artist – Country and 6th win for Favorite Country Album for Cry Pretty, breaking the AMA record for Most Wins in the Favorite Country Album Category. Carrie is the most followed country artist on Instagram and most followed female country artist on Twitter, Facebook and TikTok. She is is a proud member of the Grand Ole Opry and founder/lead designer for her fitness and lifestyle brand, CALIA by Carrie Underwood. In March 2020, HarperCollins/Dey Street books published Carrie’s first book, FIND YOUR PATH: Honor Your Body, Fuel Your Soul, and Get Strong with the Fit52 Life, a fitness lifestyle book in which she shares her belief that fitness is a lifelong journey, providing a common-sense approach to staying active, eating well, and looking as beautiful as you feel, 52 weeks a year. That same month, Carrie also launched her new fitness app, fit52, which is a holistic wellness platform designed to encourage and support users on their personal wellness journey, and is available on the App Store and on Google Play.