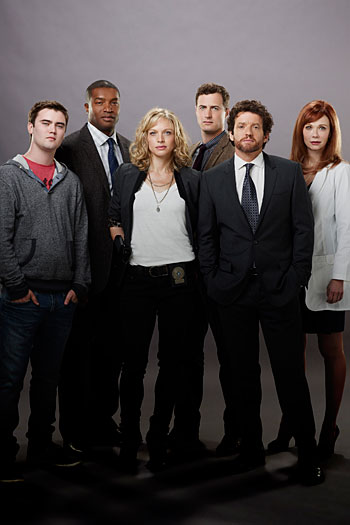 ABC’s newest drama, premiering tonight, is MOTIVE. Detective Angie Flynn (Kristin Lehman, The Killing) is a tough single mother and homicide detective with a killer instinct, so to speak. She, more than anyone else in her department, is concerned with the MOTIVE of the murderer, which helps her catch the perp when others cannot.

MOTIVE follows a simple formula. We see the victim of the crime. The police investigate said crime, as they do in any hour-long procedural, and the viewer gets to see what happens during the violent act via flashback, doled out in bits and pieces throughout the installment. What makes it slightly different from its peers, the hook if you will, is that there is a focus on why a bad guy does a thing, rather than just how they are caught.

Angie, our hero, is a lot like other leads in other crime dramas. She has an almost super-human level of perception and intelligence, able to spot small things and remember details, which allows her to complete the investigation. For instance, in the “Pilot,” it’s an offhand comment from a teenager she encounters that leads her to figure out the real villain, even though the evidence is pointing to someone else.

The problem with this formula is that it makes the rest of the department look inferior at their jobs, and it relies on coincidence to save the day. What if she had not talked to a certain person, or that person had not remarked on that topic of that one crucial piece of information? Sure, we can accept that a great detective, who is always paying attention, will eventually find that one puzzle piece, but it’s the type of stretch that frequently only comes up on TV dramas.

The success of this series will largely rest on Lehman’s shoulders, and she seems to be up to the task. Despite being in the same genre, MOTIVE is quite a departure from her previous job on The Killing, and the role she plays is a drastically different one. She does handle the part with ease, feeling comfortable in Angie’s skin, and realistically crafting the character into her own. She adequately joins the ranks other main characters in a similar job on other crime dramas.

Because Angie is so front-and-center, the rest of the cast kind of takes a back seat to her. They are around to support her, but any major breakthrough must come from Angie, not them, to preserve why she is the one we should root for the most. MOTIVE is definitely not a true ensemble piece, with the world revolving around Angie and only Angie.

No one else really stands out as super memorable in the “Pilot,” but we are introduced to a number of others, including plenty of familiar types. There’s: Dr. Betty Rogers (Lauren Holly, NCIS), the super flirty medical examiner; Detective Oscar Vega (Louis Ferreira, Stargate Universe), Angie’s doubting partner who seems to care about her at least as much as a friend would; Staff Sergeant Boyd Bloom (Roger Cross, 24, Continuum), the hard-nosed boss who stays in the office; and Brian Lucas (Brendan Penny, The A-Team), the fresh-faced, naïve, enthusiastic youngster on the squad.

Over time, we will probably get to know all of these people, and every once in awhile, the spotlight will shine a little on them. For now, they are a capable group of characters, if easily interchangeable, to fill in the space around Angie a bit, without drawing attention away from her. Which means, for this type of show, they are doing their job correctly.

Of course, in keeping with the current trend, Angie isn’t just a dedicated cop. She’s also a single mother with an unruly, but good at heart, teenage son named Manny (Cameron Bright, Twilight). Sex and speeding tickets are the issues between them right off the bat, and Angie handles those situations with a kind-hearted nature that reveals her affection for her child, but also that she’s not a pushover. This also results in the most entertaining moments of the “Pilot,” especially when Angie asks Manny’s girlfriend about her boobs.

All in all, MOTIVE is an enjoyable way to kill an hour, and it’s well made enough that fans of murder-based procedurals will enjoy it. It seems like the type of series one could grab an episode every now and then, and you won’t have to watch every week to keep up on the story. This also means there isn’t a lot of depth, and the formula will likely stay pretty rote, so it could get boring pretty quick. There is definitely an audience out there for MOTIVE, as the ratings for shows such as NCIS and Castle prove, and because it’s on during the summer, provides a nice respite from reruns. But for the discerning viewer that wants a compelling narrative, you can probably skip this one.