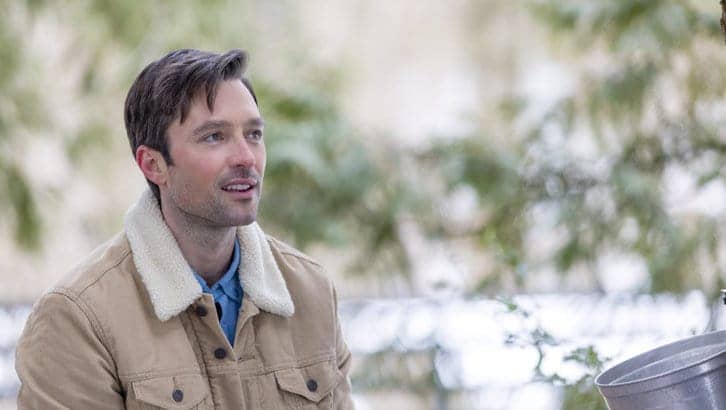 In the new Hallmark film MOONLIGHT IN VERMONT, fan-favorite Carlo Marks is bringing dash of romance into the life of a young woman who discovers that her ex-boyfriend has just arrived at her weekend hideaway with his new girlfriend. Carlo plays the dashing chef who, in an impromptu act of chivalry, agrees to pose as the lonely woman’s new love in order to make her ex-boyfriend jealous.  In an exclusive interview, Carlo talks about the fun he had working on the film, as well as teased a bit about his role in Hallmark’s drama series CHESAPEAKE SHORES.

What was the initial appeal of the role of Derek in Hallmark Channel’s new film MOONLIGHT IN VERMONT?
CARLO:  The script for MOONLIGHT IN VERMONT was a little different than most of the romantic comedies we see these days.  I was intrigued by the classic dynamic that had been set up between my character and Lacey’s.  It went back to old Hollywood, the Clark Gable and Claudette Colbert, Cary Grant and Rosalind Russel, Hepburn and Bogart antagonistic love pairing.  I responded to the role of Derek because he is a man who appreciates the details in life and understands that in order to see those details we need to slow down and focus (something that doesn’t always come easily to us modern folk).

How would you describe who your character Derek is?
CARLO:  Derek is a world class chef who trained in Paris and was ready to take the international culinary world by storm when he realized that he’d rather work in his home town with the people and ingredients he grew up with.  Like most chefs, he is a bit of a prickly perfectionist who demands the best from himself and his recipes.  He believes in taking time in the creation of his dishes.  This love of the “slow life” extends to his appreciation of nature and the ingredients Vermont provides.  To Derek, cooking is a tradition, a craft handed down from generations and cooking is a way to pay tribute and connect to the people, like his grandmother,  in his life who cooked for him.

What did you enjoy the most about this project?
CARLO:  My favorite part about working on MOONLIGHT IN VERMONT was the banter.  I think Lacey [Chabert] and I (with the help of the director) really stepped up our game and were able to get into that rapid-fire old Hollywood zone.

What was it like working with Lacey Chabert as your co-star?
CARLO:  Lacey and I have worked together before, but this time we had more to do.  I like working with Lacey because she never complains, seriously, ever.  We were shooting during a nasty cold stretch and she had to be outside in heels and thin clothes and I never heard her whine once!  She’s also a great actor, and it was such a pleasure to be able to work with someone who is always prepared and can give as good as she can get when it comes to some of our “bickering.”

What does Derek see in Fiona that really appeals to him?
CARLO:  I think Derek appreciates Fiona’s [Lacey Chabert] ability to get things done.  Fiona is a strong woman who doesn’t quit, and will always find a solution to any problem.  I think Fiona appreciates Derek’s ability to slow things down and savor the delicate beauty in life, something she often misses due to a hectic schedule.

What do you think you learned as an actor from working on MOONLIGHT IN VERMONT?
CARLO:  As an actor, I definitely learned a lot about speed in terms of dialogue.  The great director Mike Nichols once said that actors can always talk faster than they think and that’s true.  Mel Damski (director of MOONLIGHT IN VERMONT) would often remind me that I could get the words out faster and he was right.  I also learned a lot from Derek’s philosophy of slowing down.  I often find myself caught up and forget to enjoy the simple things, hopefully a bit of Derek’s brain stays with me.  I hope viewers have fun watching this film first and foremost, but also that they too will take another look at their own lives and see what details they are missing out on.  Its easy to live in gratitude for the simple things if we just take time to recognize them.

What was the experience like for you to join the Hallmark family and work on this film for it as well as joining its drama series CHESAPEAKE SHORES?
CARLO:  Working for Hallmark is like having another family.  The cast and crew of CHESAPEAKE SHORES are so relaxed and welcoming.  I came in for the last three episodes of the season, so the rest of the cast had had months to bond, but they made me feel at home from he moment I stepped on set.  MOONLIGHT IN VERMONT was another warm, relaxed set and I think that warmth carries over on to the screen.   If it has heart its probably a worthwhile enterprise and Hallmark definitely has heart!

What was it like working with such a strong ensemble of actors on CHESAPEAKE SHORES?
CARLO:  Working on CHESAPEAKE SHORES, I learned how to work in a large ensemble.  There are so many characters on that show so its important to understand where you fit in and be respectful of everyone’s story line.

What was your favorite part of working on CHESAPEAKE SHORES?
CARLO:  CHESAPEAKE SHORES is fun because a lot of it is outside and (hopefully) in the sun.  The show also balances humor and drama nicely, so its fun to bounce back and forth between the two.

What has been your favorite part of joining the Hallmark family?
CARLO:   I think I covered this in the earlier questions, but I’ll also add that the loyalty of the network is very encouraging.  After CHESAPEAKE SHORES, I got very close to a lot of roles and I felt like Hallmark was in my corner because they kept asking me to audition, I’m glad none of them hit because the role of Derek was a perfect fit for me.

What do you appreciate at the most about where you are in your career right now?
CARLO:  At this stage of my career, I’ve learned from all the roles that people are people, whether I’m wearing a superhero outfit or I’m an athlete or a chef, people are very similar in their wants and needs.  The more I work the more empathy, I have for my characters and for the people in my life.  I also see that everyone on a film set is equally as important and that kindness, respect and community go a long way in making the final project sing.

What is one of the biggest perks of your career as an actor?
CARLO:  Getting to work with talented actors and (fingers crossed) they’ve all been lovely human beings.

If given the chance, what would be one role that you would like to revisit?
CARLO:  I could see coming back to Derek.  I think Lacey and I have some good chemistry that could and should be mined again.

What do you think you have learned from the variety of projects you have worked on so far?
CARLO:  I think I learn a little bit from each of my characters.  Acting and story telling in general is such an effective way to change the way you think about the world.

What has been some of the best advice you have received?
CARLO:  So much advice! I’ve probably forgotten most of it, but something that I keep coming back to is: “this too will change.”  It’s something I remind myself when things get tough or if I get to high on my horse.

And what advice would you offer to other aspiring actors?
CARLO:  Keep doing it!  Acting is a war of attrition.  It sounds trite, but don’t give up.  I remember a quote from this Scorsese short with Nick Nolte: “Its art, you give up you were never an artist in the first place.”

What are you most proud of from all your acting experiences?
CARLO:  I think that’s what I’m proud of most in myself and the actors in my community — the belief in themselves and the unwillingness to give up.  Its a lesson that is applicable in all walks of life.

What other projects can you share that fans can keep an eye out for?
CARLO:  CHESAPEAKE SHORES Season 2. I start filming in 2 weeks!