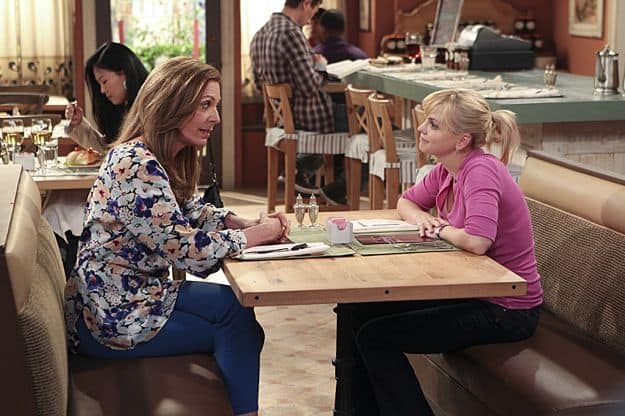 CBS is definitely in the Chuck Lorre business. Already airing Two and a Half Men, The Big Bang Theory, and Mike & Molly, Lorre’s latest creation, or rather co-creation, MOM, premieres tonight. Not as funny as Big Bang, but way funnier than Men, MOM ranks in the middle of the pack for CBS sitcoms. With the fantastic cast, though, it just may make it long enough to grow into something special.

The mom at the center of MOM is Christy (Anna Faris, Scary Movie). Christy really does not like her life, and blames her mother, Bonnie (Allison Janney, The West Wing), for her problems. See, Bonnie was a terrible parent, more concerned with drugs, alcohol, and men than with her child, meaning Christy was not nurtured and had to fend for herself. Sadly, as she became an adult, Christy has turned into Bonnie.

As the “Pilot” begins, Christy is sleeping with her married boss, Gabriel (Nathan Corddry, Harry’s Law), working as a waitress, battling with Baxter (Matt Jones, Breaking Bad) over child support for their son, Roscoe (Blake Garrett Rosenthal, New Girl), and wishing her teenage daughter, Violet (Sadie Calvano, Melissa & Joey), would stop having sex. Unfortunately, given Christy’s track record, she has little ground to stand one with that last one.

But now, Christy is trying to set herself on the right course. She’s been sober for about six months, finally starting to pay attention to her children and job. For her house in order and break the cycle with Violet, though, she’s going to have to reluctantly accept the help of Bonnie, who is also off of alcohol, though not completely free from drugs.

The beginning of the episode, in which Christy cries to her customers, is pathetic and not at all funny. It’s not a promising way to start a “Pilot,” and viewers will be forgiven if they flip the station in the first few minutes. Stick with it, though, and you may be pleasantly surprised by the end of the half hour. MOM doesn’t tell Christy’s story in the first couple of minutes. It allows itself a full half hour to slowly unfold the plot, giving you one piece of the picture at a time. Later, you will realize the parallels and it all makes much more sense.

MOM bills itself as a comedy, but the reason I ended up liking it is because it packs an emotional wallop. There is something extremely sad about Christy and her situation. She is amusing when she flips out and gets frustrated, but some of this is to distract herself so she doesn’t break down sobbing. The crying scene at the beginning may have seemed inauthentic, but one quickly begins to admire Christy for not tearing up more often.

Christy is a strong woman. She’s made some mistakes, but she’s ready to turn things around, and putting forth the effort to do so. In the “Pilot,” we see her make sacrifices for her kids, but also struggle to connect with them. Perhaps these are common parts of being a mother, but they are extra hard for Christy because of where she is starting from, already having fallen so far.

Now, one may wonder if that’s the recipe for a good series, since once Christy is able to make headway, there will be less tension for her to combat. The answer, however, lies in the brilliant casting of Faris and Janney. Both superb actresses, the chemistry they exude immediately is entertaining and ripe for development, not only heart-wrenching, but extremely funny. Their rivalry and lack of understanding of one another could be rich fodder for years to come.

Toss in Corddry, who is always excellent, Jones, who takes the comedic element he provides in AMC’s dark drama and extends it, and French Stewart (3rd Rock From the Sun) as the jerk Chef Rudy, and there is the makings of not only a strong mother-daughter relationship, which will be the show’s spine, but enough nice filler to provide enjoyable subplots and side trips.

MOM is not my favorite new sitcom of the fall, but it definitely has promise. I’m ready to find out where it goes. MOM premieres tonight at 9:30 p.m. ET on CBS.