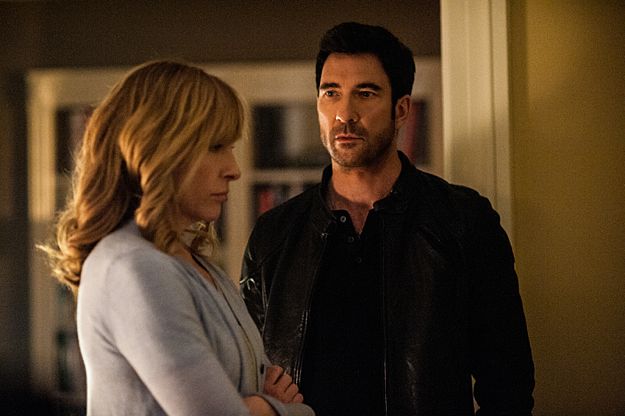 HOSTAGES is CBS’s attempt at a drama that is a departure from the procedural, a much appreciated move. It concerns the assassination of the President of the United States, a political thriller with many moving parts and a slew of characters with dark secrets and selfish motivations. Unfortunately, built like an action movie, it falls short of its goal.

The first mistake HOSTAGES makes is starting with a tense scene, then jumping back twelve hours. As I have stated in other reviews, which is evidence that this happens far too often, this storytelling technique is done to death and should be used sparingly. It may be a quick hook, but it’s an unnecessary and unwelcome one.

Another glaring issue I have with that first scene, besides the fact it exists, is that one of the show’s leads, Dylan McDermott (American Horror Story), is incredibly obvious behind a ski mask that sports way-too-big holes. I don’t care what developments happen later in the hour to “explain” why this is OK; what it obvious from the get-go is that this show will choreograph its moves well ahead of itself, and seeing the stars’ faces is more important than logic.

These are two major complaints before the story even begins. Not a good sign, and this trend continues throughout the first installment. We learn “hidden” bits about each of the central family, but they are all easy to see coming before they are officially revealed. Music takes scenes from dramatic to overly so. The action cuts in a certain false way. A main character makes a face on television that she really shouldn’t, and should be noticed by far more people than it is intended to be.

I assume that HOSTAGES wants to be the next House of Cards or Homeland, but despite some terrific actors, it lacks the script, director, and editor to reach those heights. By playing out exactly to formula for a film in this genre, it distracts us from the good moments tucked within the larger cheese.

Things progress in a standard way. We are introduced to Dr. Ellen Sanders (Toni Collette, United States of Tara), who will soon perform surgery on the President (James Naughton, Gossip Girl). Her husband, Brian (Tate Donovan, Damages), is pretty much a caricature of a certain type of spouse, weak-willed and trying to posture to make up for it. Her kids, Morgan (Quinn Shephard, Unaccompanied Minors) and Jake (Mateus Ward, Sports Show with Norm Macdonald), seem like they are pretty well behaved, overall, as far as teenagers go, but also have a shady side.

In the real world, Brian, Morgan, and Jake probably wouldn’t have these vulnerabilities, but they need them here so that they can be manipulated. By extension, so is the viewer. If Ellen’s family were perfect, those who want to pull her strings wouldn’t have the leverage they need. Because the characters are artificially layered in terrible ways, Ellen can be controlled.

Now, HOSTAGES does seek to show Ellen can stand up for herself and will not go along with what she is supposed to do. This should anger the hostage takers who hold Ellen and her clan captive. After which, the bad guys should do horrible things to Ellen’s family. Except, that doesn’t seem to be what this show is about.

The main gang that takes Ellen is led by Agent Duncan Carlisle (McDermott). After the opening, the first time we see Carlisle, he is doing his job brilliantly, catching something everyone else misses. Since he is such a fine, upstanding FBI guy, we know he can’t possibly seem as bad as he first appears to be. The “Pilot” doesn’t get into why Carlisle does what he does to Ellen, but there is obviously more we’re meant to wonder about him, and we certainly won’t believe that he’s evil. Is he being forced to play a part, too? This is the thing that might save Ellen’s family.

Carlisle is joined by Archer Petit (Billy Brown, Dexter), Maria Gonzales (Sandrine Holt, House of Cards), and Kramer Daly (Rhys Coiro, Entourage). The latter makes the mistake of being nice to one of their hostages, which Carlisle dresses him down for, but not in a cruel way. So these are good guys?

By involving the FBI and people that don’t harm innocents, HOSTAGES wants to make viewers wonder at the real motivations behind the plot. Maybe the FBI must take out this president, as some think they did with prior ones, in the name of protecting the country. Maybe their loved ones are in danger, too. Whatever the reason, though, there’s supposed to actually be a sympathetic cause behind their actions.

I’m not saying HOSTAGES shouldn’t go for the onion-format, constantly peeling new layers. It’s just that what unfolds on screen isn’t of the quality one would expect it to be given the premise. Going just by the production, one would think Carlisle and crew were run-of-the-mill villains, which is why it doesn’t seem right that they aren’t. It’s this disjointedness that ruins this show for me.