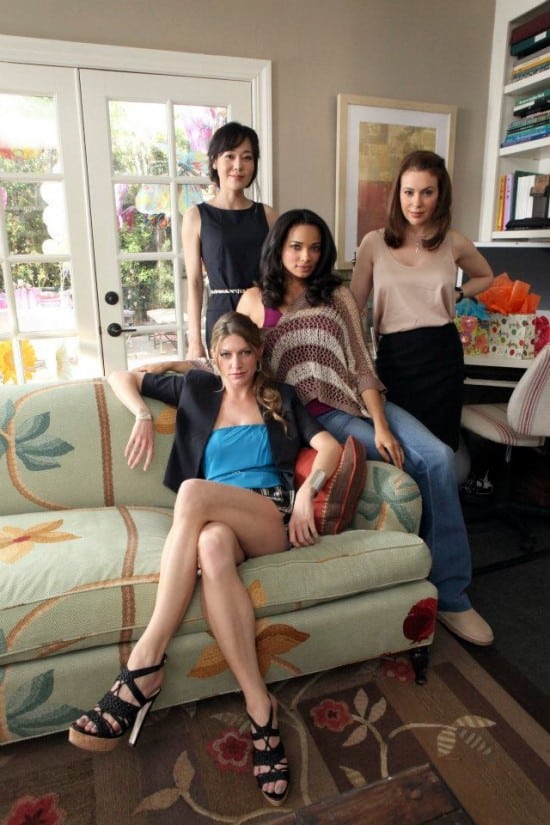 ABC is delivering a fresh, new series this summer beginning tonight at 10 p.m. ET called MISTRESSES. Based on the British series of the same name, MISTRESSES follows four female friends (two of them sisters) and their love lives, both with steady partners and while having affairs.

The title can be a bit misleading, since not all four ladies are mistresses at this time. Presumably, should the show go past the thirteen episodes scheduled for this summer, other affairs could happen that would earn them the moniker. But as the “Pilot” starts, only one of the central quartet is a mistress.

The woman I refer to is Dr. Karen Rhodes (Yunjin Kim, Lost), a successful mental health professional who sleeps with her dying patient, Thomas Grey (John Schneider, Smallville). After Thomas’s death, however, she learns that Thomas chooses to spend his final moments with his wife (Penelope Ann Miller, Men of a Certain Age), which hurts her deeply, since she assumes she is his soul mate, causing her to go to her friends for support.

Not all of Karen’s friends, whom she has abandoned during the affair, are all that supportive. They care about her, but don’t necessarily approve of her actions. This is the central issue with MISTRESSES, and why it may have difficulty being accessible to an audience. Is it ever really OK to cheat? Can you judge the act without judging the person? How many people out there will take Karen’s tryst personally, having been betrayed, and consider a turn off they can’t stomach?

Karen’s situation is further complicated when Thomas’s son, Sam (Erik Stocklin, First Day), seeks her counsel. He knows his father was having an affair, but when Karen denies the culprit was her, Sam begins to pursue her romantically. Is he really in love with this much older woman, who he seemingly thinks took good care of his father, or is this a ruse to trap Karen and cost her her license? Karen doesn’t seem ready to fall for him in either instance, but she’s in a very dangerous position.

I’m not sure whether to root for Karen or Sam to win. Both characters are sympathetic, somehow, but also not completely so, as Sam has a dark edge to him.

This type of drama seems along the vein of Desperate Housewives, a previously popular ABC drama which also centered on four women and their various romantic entanglements. It’s interesting that ABC chooses to air it in the summer, considering MISTRESSES follows along the lines of a series that ran so many years with quite a large following on the same network. However, there are some differences, and perhaps ABC worried this new show either wouldn’t land as well, or would be viewed as a copy.

It’s not a copy, and it does make for a very entertaining experience. The other drama in the “Pilot,” Savi (Alyssa Milano, Charmed) facing marital problems at home when her husband, Harry (Brett Tucker, Neighbours), can’t give her kids, a flirtatious co-worker (Jason George, Grey’s Anatomy) hitting on Savi, and April (Rochelle Aytes, Work It) trying to escape the ghost of her dead husband, is as enticing as Karen’s tale. While not completely original, these are human stories that viewers should be able to connect with on some level.

There are a couple of twists at the end of the “Pilot,” some obviously foreshadowed, some not, that set up an interesting rest of the season, and prove that the series has driving power past the first installment. I won’t spoil those surprises for you, but suffice it to say, if you like soapy drama, MISTRESSES has what you are looking for.

Given the excellent cast and the time-proven premise, I’m a little sad that MISTRESSES has been pushed to summer. But should it gain some popularity, perhaps ABC will keep it on in the fall or, better yet, make a serious attempt at good summer programming.

Besides the performers listed above, MISTRESSES also stars Jes Macallan (The Football Fairy) as the fourth member of the titular group.