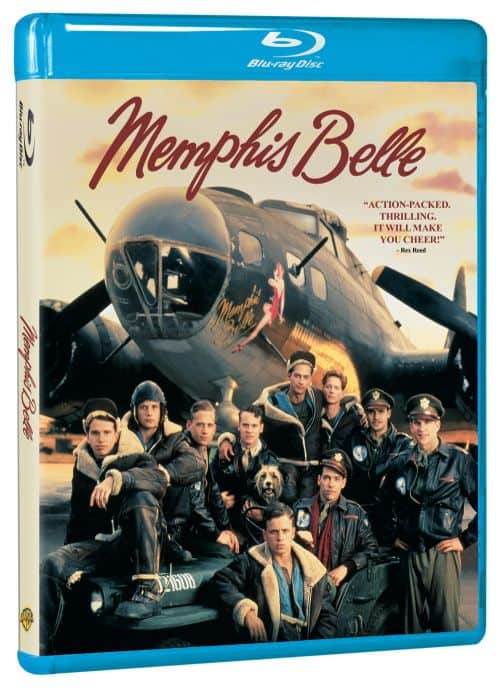 Seat42f and Warner Bros. Home Entertainment have teamed up to give TWO lucky winners a copy of MEMPHIS BELLE on BLURAY. One GRAND PRIZE Winner will receive a copy of MEMPHIS BELLE on Blu-ray signed by Matthew Modine. For a chance to win leave a comment below telling us why you want to add MEMPHIS BELLE to your BLURAY collection. Only one entry per person. Contest ends May 15th. Winners will be notified on May 16th via email so make sure to use a valid email address when you post your comment.

Memphis Belle is available for the first-time ever on Blu-ray from Warner Bros. Home Entertainment. Matthew Modine, who plays Captain Dennis Dearborn in this nail-biting adventure that spectacularly recreates the spectacular mission filmed for a 1944 documentary, looks back at the making of the film nearly 25 years after its theatrical debut in the following just-released interview. The interview also recounts Modine’s personal family connection to the war efforts.

There’s an entire genre of World War II movies. What makes these films so universally appealing to global audiences?

MODINE: That’s a great question. Perhaps it’s because WWII was the first war that was so well documented. Portable sound and film equipment allowed reporters and documentarians to easily carry cameras into the battlefields. I’m sure it was also the enormous scope of the war. We look back now upon the bravery of the men and women who selflessly fought to save the lives and freedoms of others. War films, in general, provide great material for writers and directors to quarry through. There are so many examples of intense emotional journeys, the fight for survival, the human bonds that are formed in extreme circumstances. These elements make for great dramatic storytelling.

As we commemorate the 75th anniversary of the start of World War II and the 70th anniversary of D-Day, what parallels can be drawn between the servicemen and women of yesterday and those defending their country today?

MODINE: The terrible cost of war. Sadly, there is evil in humankind. Ironic that “kind” is even a part of the word. We must, much more often than we do, look upon the young men and woman that go to battle and commend them for their service, their courage, and commitment. As we commemorate these anniversaries, it’s so important for each of us to acknowledge the sacrifice of our sons and daughters that are, all too often, called to duty.

How did you prepare for the role of Captain Dennis Dearborn in Memphis Belle?

MODINE: Before we began filming, the director, Michael Caton-Jones arranged for the actors to go to a “boot camp” in Southern England. The entire crew of actors were put through 10 days of rigorous training. The goal was to get the actors to learn to work together in a similar fashion that a B-17 crew that had been through 24 combat missions. Of course it is impossible to even approximate the actual horrors the Memphis Belle crew would have been witness to. But the British SAS team that put the actors through obstacle courses and physical training did a great job making the actors a cohesive team. It was tough at the time. But from the rearview mirror of time, it was fantastic!

When we finished our training, we traveled from Southern England to an airbase where we would film the exterior shots for the film. It was in Lincolnshire that we all had the amazing opportunity to meet the real men we were going to portray. Everyone had so many questions for the real servicemen. We wanted to hear from them about the challenges they faced. We all wanted to be as honest and as “real” as possible. To honor them. Hoping to convey the emotions they faced. Meeting Robert Morgan, the pilot of the Memphis Belle, and the role I was portraying, was a highlight of the entire process.

Perhaps the most emotional aspect of filming for me was having the opportunity to tell my Uncle Wylder that I was going to be in a film about him. Wylder was a Captain in the 8th Army Air Force and piloted a B-17. Now I would be doing the same in a film. I had so many questions for him and he shared stories the way men from that generation did. Very sparingly. Humbly. No bravado. I believe my Uncle and the others that have lived through the wars don’t speak colorfully about their experiences because they deeply understand the tremendous human cost of war.

In Memphis Belle, you can’t help but root for the boys in the war. The World War II B-17 bomber pilots faced a particularly life-threatening challenge and many didn’t come home.  What was it like to portray this weighty sense of mortality?  And, was there a sense of camaraderie on the set that contributed to the chemistry of the cast on screen?

MODINE: When I told my Uncle Wylder that I was doing the film, one of the things he did was take out his dress uniform. I tried it on and it fit like it was made for me. It was incredible to put on this piece of history. To wear a uniform that a Purple Heart recipient and a hero from the war had actually worn. He told me to take it with me to England. To wear it in the film. I asked him if there was a secret we could have. Something I would do or touch that would be a “wink” to my Uncle. Something he would know was me tipping my hat to him. He said, “No. But when you put on that uniform, don’t disrespect it.” That gave me a tremendous sense of responsibility. I shared this story with the other actors on the way to our first day of filming. I told them about the uniform and how my Uncle had been shot down, nearly losing his right arm completely and how he’d asked us not to “disrespect the uniform.” I think my Uncle’s request is apparent in every actors’ performance in the film.

Looking back, nearly 25 years since Memphis Belle debuted on the big screen, has the role of Captain Dennis Dearborn shaped your filmography?

MODINE: Yes. Of course. That sense of responsibility to people that fought, and to so many that died, stays with me. The terrible cost of war, not just the human cost, the loss of life, but what it does to the human soul. There are only a few surviving veterans of the Second World War right now. Special people of great character. I feel so fortunate when I meet with one of them, and incredibly honored when they recognize me from Memphis Belle and they say I “did good!”

You delivered a command performance as Private Joker in Full Metal Jacket, one of the most notable movies about the Vietnam War from Stanley Kubrick—how did that help prepare you for the role of Captain Dennis Dearborn in Memphis Belle?

MODINE: War is war. The men and woman that are sent to fight wars do not determine the cause. They enlist, or sometimes, they’re drafted to fight the wars. Private Joker and Captain Dearborn are enlisted men. They chose to be where they are. Obviously they’re quite different personality types. In Full Metal Jacket, Pvt. Joker quotes psychiatrist, Carl Jung, speaking about the duality of man, “Aggression and xenophobia on the one hand. Altruism and cooperation on the other.” I think Stanley Kubrick, Carl Jung, and the author of The Short-Timers, Gus Hasford, from which FMJ is based, helped prepare me for Memphis Belle. Understanding the duality of man is a great way to begin to prepare for most every acting opportunity.