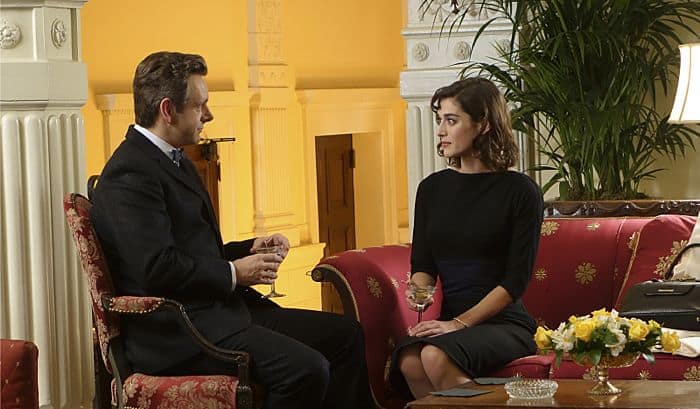 Showtime’s MASTERS OF SEX begins its second season this week with “Parallax.” A number of things happen in the first hour back, but mainly it is a reset. Months have passed since the finale, though we see flashbacks to the scene immediately following Masters (Michael Sheen) showing up on Virginia’s (Lizzy Caplan) doorstep. From there, the story begins moving forward again, catching us up with most of the primary cast and beginning their latest plot arcs.

When last we saw him, Masters had been fried from the university because of the scandalous nature of his study. Knowing who this man is and what he is known for, MASTERS OF SEX being based on real events, viewers are not expecting him to give up, and they will not be disappointed. Masters has trouble keeping his mouth shut, which often works against him, but he’s also dedicated and persistent, qualities that serve him well. And while his former employer may not have the stomach to support the exploration of human sexuality, not everyone is so squeamish. It doesn’t take too long for Masters to recruit a new benefactor (Danny Huston, Magic City).

Like many modern protagonists, Masters is not inherently likable. There is not ‘but’ coming here. He may be intelligent and able to eventually meet his career goals, but he lacks in other areas. For instance, he finds it a struggle to be a good father, now that Libby (Caitlin Fitzgerald) has had their baby. It’s odd that someone who works so well on the baby making process can handle the results of their efforts, but Masters is not kid-friendly, as you’ll see in “Parallax.” This begs the question, can he ever be happy with his family, and can they ever be happy with him?

Virginia does get another side of Masters, but even that isn’t his strongest side. Yes, he puts Virginia’s name on the study and certainly wants her to be included in future work. But it’s not like they’re out selling themselves as a package deal. Virginia is still in the employment of Dr. DePaul (Julianne Nicholson), which does not net her enough to support her family. Virginia is definitely adrift in this premiere, finding it hard to take a step back down after the heights she achieved with Masters, working to readjust to a more boring existence, something she’ll never be satisfied with, because he doesn’t show her his loyalty.

The pathos exhibited by Masters and Virginia, both complex, interesting individuals, are engaging on their own, but MASTERS OF SEX really gets humming when the two combine. While most television shows with a co-ed leading duo have sexual tension, and Masters and Virginia do, too, they are different. There is no foregone conclusion that they will end up together, and “Parallax” actually finds them pulling apart. This is done in an authentic way, lacking the usual television tropes that artificially drive a wedge to keep the story going, and it’s far from certain if the writers are done with them as a couple before they even get started, or if there could be a bit more personal stuff between them in the future. They work together well; they may or may not be able to sustain romantic interest.

My favorite recurring players on MASTERS OF SEX, and there are many good ones to choose from, are Barton Scully (Beau Bridges) and his wife, Margaret (Allison Janey). This season premiere continues to cover their problems, Barton seeking a ‘cure’ for his homosexuality and Margaret no longer willing to look the other way, but acting as supportive of Barton as she can be. I was a bit concerned they’d be dropped from the series as Masters and Virginia move away from them, but while neither has been upgraded to main cast member, so their time could be limited, at least MASTERS OF SEX seems likely to see their story through.

In general, while nothing huge really happens until the very end of the hour, “Parallax” is a solid start to a sophomore season, serving its purpose and providing enough hooks to keep the audience returning. There are some very moving moments between players and it continues at the quality level fans expect. Plus, it ends with a very big development that will have fans talking.