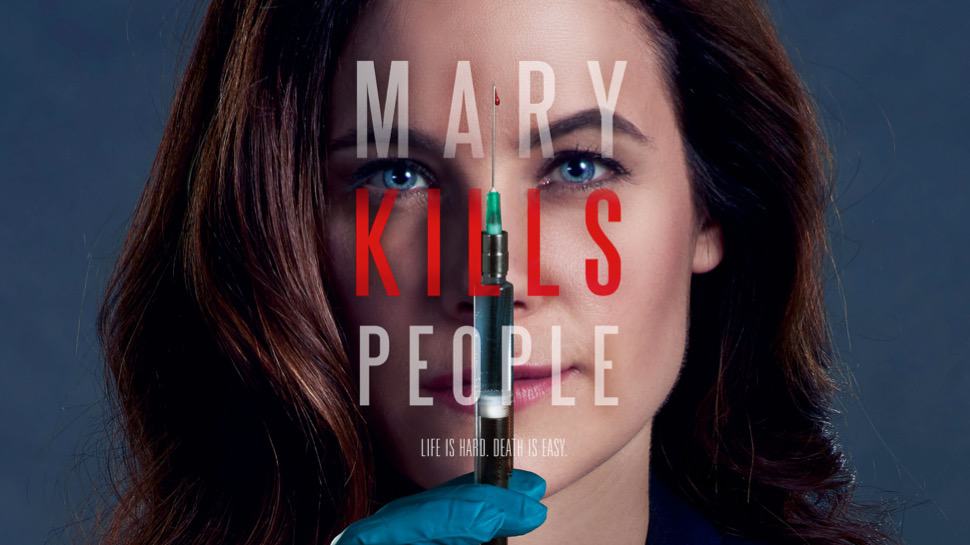 In what has to be one of the most thought-provoking shows on television, the drama series MARY KILLS PEOPLE takes viewers into the world of Dr. Mary Harris (Caroline Dehavernas), who makes it her mission in life to provide end-of-life services to the terminally ill as well as to those who are suffering from heinously painful diseases. The first season introduced Mary and her partner in crime Des (Richard Short), and emphasized the perils of evading both law enforcement and a local drug dealer who wanted in on the action. While attending the Television Critics Association Winter 2018 tour, we had the chance to chat with show creator and executive producer Tara Armstrong about Season 2 of MARY KILLS PEOPLE. In an exclusive interview, Tara previewed the heightened stakes for Season 2 and the appeal of centering the show around the issues death and dying.

Maybe you could just tell me a little bit about the genesis of the show.
TARA: Yeah, so I wanted to write a show about death because I personally have just always been obsessed with death. I don’t know why we don’t talk about it like every five seconds. I also believe that we live in a really death-denying society and that that is to our detriment. Like I think the more we talk about it, the more we explore it, the greater understanding we can have about it, and the easier it will be to deal with it in life. Not to say that it will be easy, ’cause it’s not. But I just really wanted to write a show that explored all of those topics. I wrote it when I was at university actually for a creative writing degree. Everything I was writing about in this degree was about death. Any assignment I could have, I was just writing about it. And one of the assignments I had was go into a place of my choosing and do an immersive article. So I chose to go into a hospice because I was just really interested in the people that make death a part of their daily life and who work with people who are dying. I find those people really fascinating and really strong, and it kind of came out of that. In Canada, assisted-suicide was totally illegal at the time and I just had this idea and day to write about it.

Going into the second season after a very tumultuous first season, the show introduces a female antagonist. Can you can talk about why you chose to have a female-versus-female story for Season 2?
TARA: Because it’s so interesting. We had a bad guy in Season 1 and he met his demise, but we knew we wanted an antagonist for Season 2 and we just thought it should be a woman, like wouldn’t it be so interesting to see Mary come to be put in these difficult situations by a woman? For me, it’s been so great to see Caroline Dhavernas and Rachelle Lefevre — two amazing actresses — just go against one another. They’re both so powerful and so empowered in what they do. They both are kind of like the queens of their domain and they go head-to-head, and it’s just really exciting.

In the first season, Mary (Caroline Dehavernas) was swimming circles around men because they couldn’t anticipate what she’s doing. So now it is like she’s up against a woman who will probably think like another woman who can anticipate her moves and that gives her kind of less of an edge.
TARA: Olivia(Rachel Lefevre) definitely gives Mary a run for her money in Season 2.

When Season 2 picks up, where is Mary’s headset? Where is she coming from off the tumultuous circumstances that she found herself in in Season 1?
TARA: We start eight months from when Season 1 ended and Mary has been kind of quiet lately and continuing to do what she is doing, and Des (Richard Short) has actually ended up in prison as a result of what went down in Season 1. So the story begins basically the day that Des gets out of prison and our dynamic duo are reunited. But Mary has been happily doing her business without Des and then finds that when he comes back, she can’t do everything exactly the way that she wanted to. So they sort of start the season breaking apart from one another.

So they thought maybe they would pick up here they left off, but that turned out to be a misconception and it kind of put them at odds a little bit?
TARA: Exactly, yeah. We put them at odds.

Because in the past, Des has always had Mary’s back and she relied on that.
TARA: Yeah. But he really goes super far this season to protect Mary and that has all sorts of ramifications as well.

That’s going to be very nerve-wracking to watch. What about Mary’s family? She’s got her daughters and that was a bit of a contentious situation with her ex-husband. Where does that pick up?
TARA: We start with Mary and Jess (Abigail Winter) in not in a great place. Jess is just still not trusting her mother because of everything that has happened and just knows that she’s lying about something. Knows that she’s doing something, she just doesn’t know what. The storyline with Jess and Naomi (Katie Douglas) — we’ve introduced as a new teenager love interest for Jess — which is great, her name is Heather (Karena Evans), and she’s sort of complicates the Jess and Naomi dynamic. And Naomi, actually in one of the early episodes, discovers what Mary’s doing, so that throws a big wrench in it.

So she’s gonna have to be accountable to her own children, who are gonna wonder what mom’s been hiding and why. What is the arc that you wanted to explore this season for Mary?
TARA: I think this season is really about boundaries and pushing boundaries and crossing lines. We explore deaths that are more complicated. One of the very first episodes, we have a couple — one of whom is terminally ill and one of whom is not, and they want to die together — which is actually something that happens all the time with older couples that are together. They want to pass with one another because they just feel like without that person what do they really have left. So that’s our first death of the season and it’s actually kind of what puts Des and Mary at odds because Mary is on board with it and Des is not, and that sort of gets very complicated in this episode.

Have you felt any push back from the networks or anybody regarding the particular issue of “right to die”?
TARA: No, the network has been really amazing and is one of our partners in exploring this really complex issue. There hasn’t been any pushback at all really. In Season 1, I think we tackled deaths that were fairly straightforward and then in Season 2, we knew we wanted to explore some deaths that were a bit more complicated.

What would you like people to think about death? What would you like them to think about it in their own lives?
TARA: What I’d like people to think about death is just that talking about it. It can be cathartic and talking about it can help us. I think what’s so interesting about Mary — and she even says in the last episode of Season 1 — staring death in the face makes you feel alive. From the people I interview, that do do this work, they do have a different perspective on life. They don’t hesitate because they know it can all be over in a minute and they live their lives — it’s a cliché — but as though every day is their last.

Do you think Mary lives her life like that?
TARA: Fearlessly, yeah. They’re more excited about their everyday life and go after what they want — what they really want and pursue that with a passion.

You also introduced last season, the police element and Des obviously ended up in prison. So how are the police going to play into Season 2? Are they still shadowing Mary and trying to trap her?
TARA: I don’t want to give anything away. But Des does come back in an unexpected way, and Mary and he are actually kind of working together in Season 2.

Mary’s sister Nicole (Charlotte Sullivan) was obviously a pivotal person as well last season because of the circumstance regarding their mother’s death. Are we gonna get to revisit her as well?
TARA: Yes. She comes back in the second episode as well. Actually, as we sort of alluded to in Season 1, she has this interest in joining the business. She makes Mary take her along on a death and actually sort of has an adverse reaction to it, which stems from the backstory with their mother and all of that. So she sort of has her arc over the course of the season of wrapping her head around what they do.

Obviously this season will have a specter of death after losing Greg Bryk — particularly as he was such a big presence in Season 1 — is there going to be anyone who can to fill that void, or will we just continue to feel the shadow of that loss?
TARA: Well, Olivia, our bad girl of the season actually has ties to Grady, Greg’s character. So there is a similarity to the two of them that I think. She’s pretty bad. She’s giving Grady a run for her money in terms of bad.

Grady was fascinating. He was not necessarily all through and through bad. He just wanted to be a business partner.
TARA: We really love playing with that idea of: who is good, who is bad? Asking the audience to think about understanding our characters, and then having them do things that make them question that perception. I think that’s how people are. No one’s all good, no one’s all bad — and so are our characters.

You just want to raise a lot of questions in their minds.
TARA: Yeah. I’m excited for you to see it.

To see just how more life-threatening and shocking the circumstances get for Mary and Des and everyone around them, be sure to tune in for the U.S. premiere of MARY KILLS PEOPLE on Monday, March 12th at 10:00 p.m. on Lifetime. To find out more about the show and for exclusive behind-the-scenes information, be sure to follow the show on Twitter @MKPwritersroom.