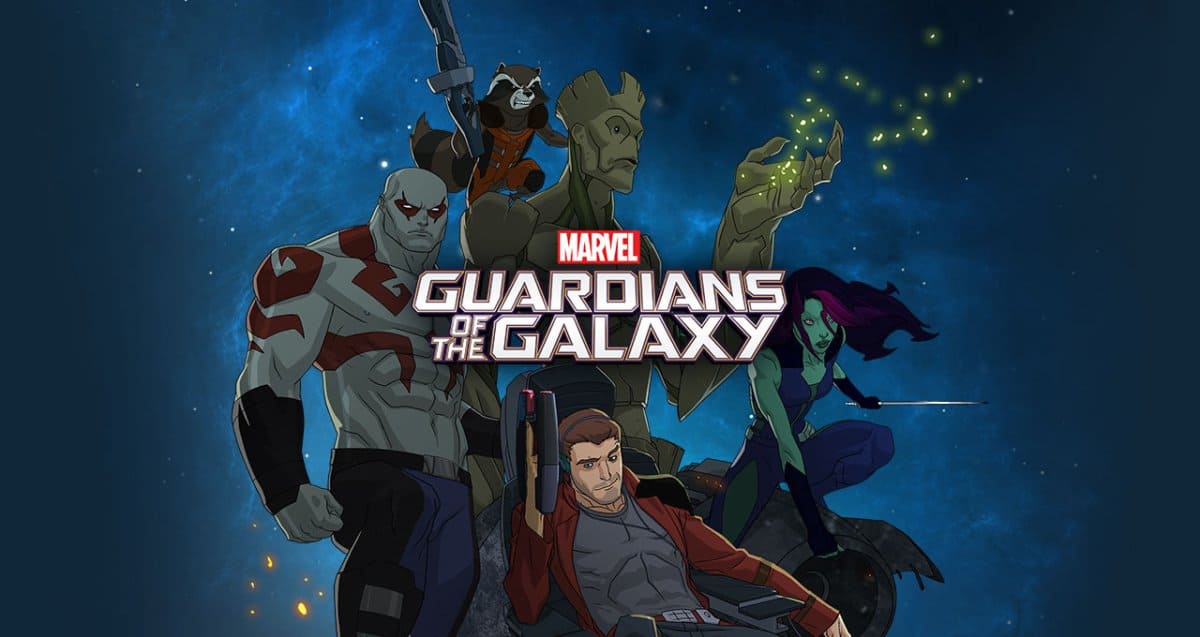 MARVEL’S GUARDIANS OF THE GALAXY Review

MARVEL’S GUARDIANS OF THE GALAXY was an awesome surprise last summer, a film set far apart from the others the comic book company’s movie studio has released, yet thoroughly enjoyable in its own right. Full of unique, developed, magnetic characters and a moving story arc, it is worth repeat viewings, and has quickly sparked both a sequel and a cartoon spin-off. That spin-off, also titled MARVEL’S GUARDIANS OF THE GALAXY, premiered last night on Disney XD. And it is not worthy of the name.

I used to watch cartoons as a child, of course, but have not watched this type of cartoon since probably around 1990. The type I’m talking about is a formulaic action drama in which a generic group of bland characters jump from action scene to action scene, spouting trivial dialogue that means nothing to the story, and lacks any emotional depth or character development. MARVEL’S GUARDIANS OF THE GALAXY is exactly this, and could have blended in a late 1980s lineup seamlessly.

Gone is everything that makes MARVEL’S GUARDIANS OF THE GALAXY special. Sure, the characters, including many of the supporting ones from the movie, are still there, as are the settings, and even the soundtrack. But they are all merely set dressing for a trite, flat adventure, not used to any real effect. For instance, Drax the Destroyer (David Sobolov, Call of Duty 4: Modern Warfare) still talks about getting revenge, but we no longer feel the sadness in his eyes. And Peter Quill (Will Friedle, Boy Meets World, Kim Possible) pops in the song “Hooked on a Feeling” as background noise as the team stages a raid, but it doesn’t mean anything like the songs do in the movie, it’s just static.

I am loathe to blame the voice cast, because I know many of them have good reputations in the voice-over world, though I haven’t watched most of their work. Yet, the magic that the original group, none of whom return, brought to the film is completely missing. Friedle’s Quill is fine, I guess, as a lead, but he doesn’t exhibit the layers that Chris Pratt communicated in each line. A large part of this could be because Friedle is not given the material with which to play, but part of it is the chemistry between the ensemble just isn’t there.

The plot itself is extremely A.D.D. In a single half hour, there are no less than six, arguably more, sequences that are all about shooting and running, both on the ground and in space. The movie has its share of action, to be sure, but it’s not constant. It slows down to get inside the characters’ minds. This cartoon shows no signs that it will ever do that.

Even the mystery of the pilot, in which Quill discovers that he’s half of a specific alien race, has no impact. That’s because the show has not given viewers enough time or substance to get to know the character. Now, being a follow-up to the movie, it might assume we already know him. But because this Quill is different, we need to meet him all over again, and we don’t get to.

There’s also much made as to whether the characters are outlaws or heroes. Gamora (Vanessa Marshall, Star Wars Rebels), of course, argues for the latter. Yet, since there are no consequences in sight for the former, no one questioning their motives or holding them accountable, the question is a moot point, merely included so Gamora gets a couple of lines, not because it matters.

The bottom line is, I won’t be giving this series another chance. It is a generic as they come, with none of the spark of its source material, and no compelling reason to tune in, the cliffhanger lacking any real sense of danger because of how tame the violence is. Not being a child any more, nor having one yet to seek an opinion from, I can’t say for certain if it will hit its target audience; after all, myself and many of my friends used to watch this kind of junk. But I know there is better, more intelligent programming out there for kids, and it would be nice to see even a little bit of effort on the part of this production to be something stand-out.

MARVEL’S GUARDIANS OF THE GALAXY begins its regular run on Disney XD on September 26th.