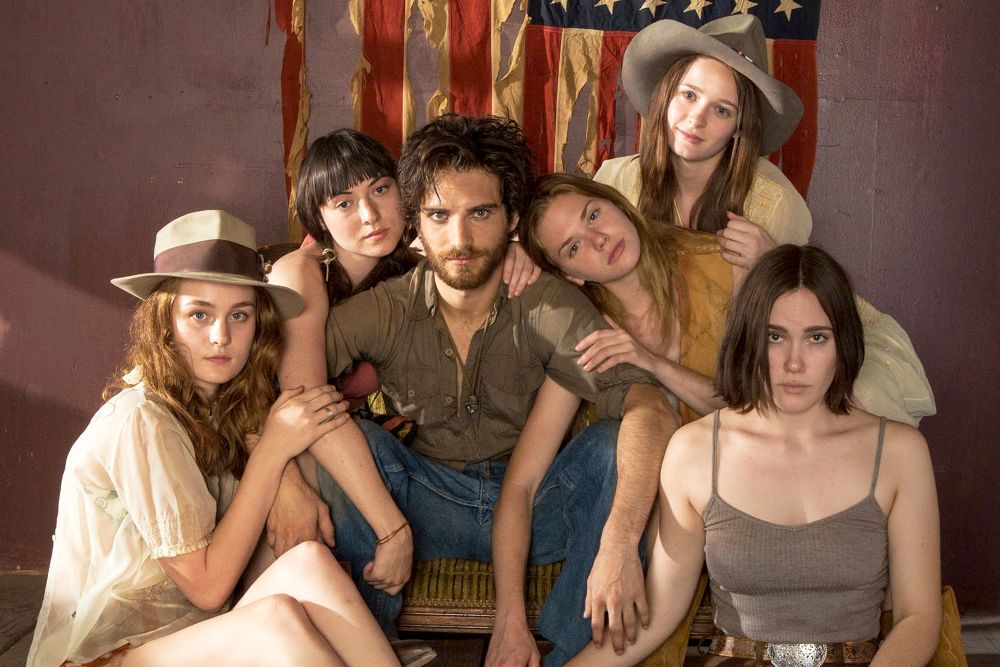 Charles Manson is a name that invokes images of murder, mayhem and the macabre.  In Lifetime’s latest movie MANSON’S LOST GIRLS, the final months of Charles Manson leading to his arrest and subsequent incarceration for a string of murders are recounted through the eyes of the women who not only aided in his crime spree, but who ultimately became his undoing.

In an exclusive interview, star Jeff Ward talks about peeling back the layers of Charles Manson and the challenges of portraying a man hell-bent on bringing down everything and everyone around him.

What sparked your interest in the role of Charles Manson in this film?
JEFF:  A lot of things.  The character is obviously complicated and complex and I wanted to portray a complicated and complex portrait.  As I learned more about him, I got more fascinated in the details as it all started to unravel.  He kind of seems fake as you learn more about him.  I really loved the script and the point of view from which the story is told.  It’s all told from the girls’ perspectives, namely from Linda Kasabian (Mackenzie Mauzy) who is the one who ended up turning state’s evidence without which they would not have been able to convict Charlie.  So it is kind of an interesting entry point that has not been fully explored before, and it is also the subject matter of the movie being over the month leading up to the LaBianca murders.  It has been well-documented as to the murders themselves, but the big thing for me — and I felt that the script answered — was why.  Why did this happen?  How did it happen?  There is the very straight-forward “why” which is he wanted to be a musician and felt rejected by a specific record producer and also by what he thought was the music scene at large.  That was when things started to get violent.  But the more important “why” to me was why did these people begin to follow this person. There is no way someone could walk around and go “I want to kill a bunch of people.”  No one would give him the time of day.  He would like a homeless, crazy person.  But he did attract a lot of followers.  I was intrigued as to how and why these people were willing to kill and die for him.  I think the film begins to answer that question.

Do you see Charles Manson as someone who wore a lot of masks or was he always presenting his true self and people kind of fell under his spell?
JEFF:  Oh no.  He was the nastiest, son of a gun.  He was such a chameleon.  He would completely change what he said his opinions were based on who he was talking to.  He would change how he would talk, what he would talk about, or he would talk a lot or listen a lot, or he would pull out his guitar and play a song.  There was a motorcycle gang called the Straight Satans, who were very similar to the Hell’s Angels, and the Straight Satans — in exchange for sleeping with Charlie’s women — protected the “family” — mainly from the Black Panthers.  Charlie was paranoid that the Black Panthers were coming to get him.  Like when he would talk to the Straight Satans, he would really ramp up his racism and his Southern biases, and if he was talking to a California girl that was from L.A. and potentially had some money, he would kind of stowaway his Southern accent and he’d been a lot more neutral and talk about peace and love and anti-capitalism and that kind of stuff.  The only true self that he ever was that person.  Beyond that, nothing was real. Well, I think his racism was real ’cause it was one of the more epic cases of racism seen in American history.  He was just completely different based on who he was talking to.  He was so cowardly.  He just never had any spine.

Do you think he had any real relationships or was everyone around him just people he was using for various reasons?
JEFF:  I think it was all for various reasons.  There were several times that are recorded that he tried to bail.  Like he literally tried — when Bobby Beausoleil was arrested for the murder of Gary Hinman — his first thought was to leave and start over; and he almost did that after the Tate/LaBianca murders.  He was really just ready to bounce.  By the way, he sent them in to kill the LaBiancas and then he left.  He just drove away, and they were like, “How are we going to get back?”  So they hitch-hiked.  I think there was one person he cared about.  He married a girl when he was younger, about 21 years old.  Her name was Rosalie.  So he marries this girl and tried to get a real job and tried to live a normal life and it didn’t work.  He turned to crime very quickly over and over again.  So once he was in jail, she left him for another guy.  From what I have read, that kind of feels like that kind of shattered any possibility for him to have a personal relationship for him.  So I think everything after that was for his own purposes, which was not murder until much later.  Most of the time he was able to get what he wanted. It was not violent until much later.

For you, what was the challenge of portraying some larger-than-life like Charles Manson?
JEFF:  His voice because of the accent and it was always changing. Also there is so much there and just trying to convey as much as possible in the limited amount of time of the movie.  I think just balancing the character based on a real person and this story and this script, that was on my mind a lot.  I really wanted to sound like him and look like him.  I know that when I saw the movie I was disappointed because I still look like me and I recognize the voice and it’s not him.  That was a big challenge for me.

Outside of the challenges, was there something that was particularly fun to do working on the film?
JEFF:  Yeah, there was a lot of really fun stuff.  There was a scene where I got to destroy a car with a crowbar because he was so angry.  That was kind of fun because it was just an angry scene when there were so many difficult ones and it was fun to just smash through a windshield of an old car.  I also loved the party scenes at Dennis Wilson’s house.  It’s a great house.  The movie does a great job. I love how it turns out because it conveys the fun and the light-heartedness of what the “family” once was.

Before they spiraled out.
JEFF:  Exactly.  Things definitely don’t end up going well in the end.

What do you think you learned and took away from this project?
JEFF:  I think Charlie is a cautionary tale for parents.  He didn’t have a dad and his mom went to prison as she was trying to provide for him and he grew up with his uncle who is a pretty terrible person.  Then he turned to crime.  From age 10 to 32, over that 22 year span, he spent 18 of them in prison or reform school.  So he was always lost.  I really in my heart think because he never had a family that it is a bizarre twist of fate and not really an accident that he ended up being called a “family.”  I mean, there were tons of hippie communes and none of them were called families.  So I think Charlie was always searching for a family.  I think when you realize that and see his story and all the terrible things he chose to do and all the terrible things that happened to him that he didn’t choose to do, it just makes him a person — not such a comic-book character/villain, which I think he can be portrayed as.  He is just such a super damaged person that I also think happened to be a very bad person and the combination of the two created a monster.

What would you have thought would be the wake-up call for these people who thought they were his “family”?  Do you think there was a point where they should have realized that things were spiraling out too far?
JEFF:  I think once you’re really deep in something, it’s all relative.  I think human experience is all relative.  For these people, they were in it so long and they were on so much acid and were so exhausted all the time.  It’s such a hard question to answer. When you are in it and “under water,” there is nothing else to hold onto.  It feels normal.

Beyond MANSON’S LOST GIRLS, what other projects have you been working on that may be coming out?
JEFF:  I did a film last year called “The Boy Downstairs,” starring Zosia Mamet, that I am excited about.  It was a very fun shoot.  It’s about Zosia’s character moves to New York and moves into an apartment that happens to be above her ex-boyfriend, played by Matthew Shear — great guy and great actor. It’s kind of a love/romantic-comedy where hilarity ensues.  Sophie Brooks wrote and directed it.  I’m excited for the release of that movie.  I am also doing a play in L.A. in May called “Gruesome Playground Injuries.”  That’s a fun title.  The play is about nine different instances of a couple knowing each other over 35 years.  The first scene of the play is when the character are 8 years old in a nurse’s office in elementary school and comes around randomly throughout the years until it ends up with the last scene of them at 35 talking to each other.  So it’s kind of this story of this guy who is so in love with this girl and he kind of won’t acknowledge it.  It’s a great play by Rajiv Joseph, who wrote the play Robin Williams did on Broadway called “Bengal Tiger” — another great play.  I also just did an episode of ROSEWOOD, where my friend Anna Konkle is one of the leads on it.  I did a few days on that a couple months ago.  That was very fun also.

To see Jeff’s complex performance and to understand just how Manson’s world spiral out of control to the point it actually imploded, be sure to tune in for the premiere of MANSON’S LOST GIRLS on Saturday, February 6th at 8:00 p.m. on Lifetime.  Then be sure to catch Jeff in the upcoming play “Gruesome Playground Injuries” if you can in Los Angeles this May!