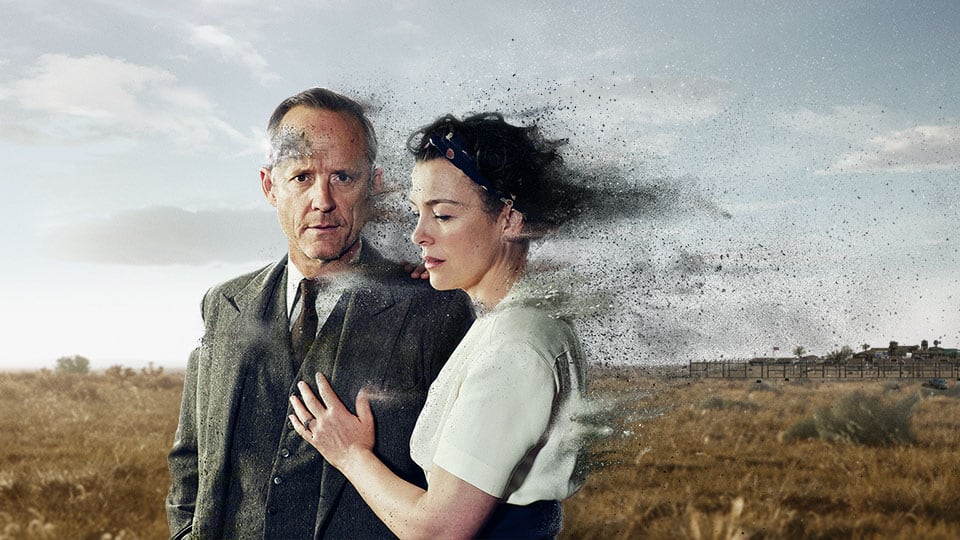 “Damnatio Memoriae” is a Latin phrase that means a person must not be remembered. As MANHATTAN returns for a second season on WGN America, the premiere episode bears that title, and many in charge of Los Alamos would like Frank Winter (John Benjamin Hickey) to be forgotten. The hour does the opposite, though, with Frank’s absence felt in both big ways and small, and frequently mentioned. The more things change in the desert, the more Frank is ingrained in the minds of them all.

I expected MANHATTAN to feel like a different show without Frank (who isn’t the only cast member gone when the sophomore run begins), but it really doesn’t. Characters come and go on MANHATTAN, and while Frank is central in the first year, there are other important players who are still around. As such, while Frank (and Daniel Stern’s Glen Babbit) will be missed by the fans as well as the other characters, MANHATTAN must continue.

“Damnatio Memoriae” begins with the testing of the atomic bomb, before jumping back in time fifteen months. While it’s not news to the audience that the bomb actually gets made and works, something taught in history classes all over the world, the show uses a subplot with Russian spy Jim Meeks (Christopher Denham) to build suspense. The flash-forwards also seem to promise Frank’s return. Are these events set for the season finale, or much later? We’ll have to wait and see.

In the present, Charlie Isaacs (Ashley Zukerman) has been promoted to head up the implosion project, now the focus of the camp. He bristles against how he gets the job, but he takes to the new-found authority with startling ease. From going head-to-head with the mysteries spy hunter Occam (Richard Schiff), to lying to the staff about Frank’s whereabouts (or so Charlie thinks), Isaacs quickly becomes comfortable with his position. He may not have wanted this turn of events, but they suit him well.

Part of Charlie’s stepping up could be because he learns that his wife, Abby (Rachel Brosnahan), is pregnant. She may not give their marriage a second chance, but Charlie is going to be a parent, and that rearranges one’s priorities. But even before that he shows the tenacity, strength, and willingness to play the game that is needed. I have to say, I’m a little surprised, especially knowing the mistakes he’s made in the past. Some people just rise to the occasion, though.

Frank may be gone, but his wife, Liz (Olivia Williams), is not. Told she must stay in Los Alamos because of what she knows, she is demoted in her living quarters and not given any information about what happened to her husband. She’s essentially an unwilling prisoner at this point, but I give her credit for not giving up and managing to get her daughter transferred away, despite the efforts of Dunlavey (Jefferson White), who is by no means a worthy opponent.

The major character introduced in “Damnatio Memoriae” is the new head of the base, Col. Darrow (William Peterson, CSI). Darrow comes into quite a mess, and while he won’t get everything under control right away, he does get a chance to assert his authority with Crosley (Harry Lloyd). This scene tells viewers right away the type of commander Darrow is, and he’s one that should not only get things running much more smoothly, but also will not be trifled with. The time for nonsense is over.

Being on WGN America, many people may not yet have heard of or given a chance to MANHATTAN. It is a terrific human drama, though, and while not wholly historically accurate, with fictional characters put into real events, is a fascinating look at the type of place in which the bomb was built. It’s definitely worth watching.