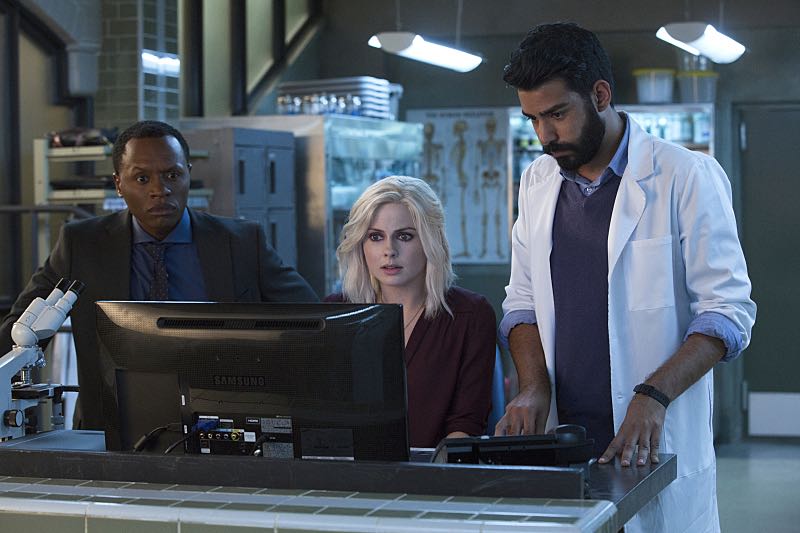 Torn up inside and hating the man he has become, Major Lilywhite (Robert Buckley) has turned to the one thing he swore he would never turn to: drugs.  For a man who spent his life trying to save kids from a life of drugs on the street, Major could never quite fathom how sheer desperation could drive anyone into a drug addiction.  But looking for an escape from there personal hell that Max Rager has sent him to as a zombie-hunter and killer, Major is clinging to the one thing that offers some relief from the battle raging in his own soul and the nightmare he is being forced to live — Utopian.  Horribly enough, tainted Utopian has already had a dire effect in Major’s life, from the cursed party boat where Liv (Rose McIver) first became a zombie to being the one thing that ended up curing Major from zombie-ism and now provides the only solace that Major can find to numb his agonizing emotional pain.In an effort to find out if our beloved IZOMBIE hero can be rescued soon from the clutches of Utopian, we checked in with executive producer Rob Thomas for a few answers.Just ow far will Major’s Utopian drug-addiction go this season?ROB:  He will hit rock-bottom.  That’s the journey he is going on.  He’s doing this horrible thing and can’t quite stand himself.  We have a scene, that I really adore, in which he officially hits rock-bottom — we have the creepiest actor playing a former Helton Shelter kid and Major is out on the streets trying to score Utopian and he ends up buying it from a kid he used to tell “stay off drugs” and the kid calls him on it.  That’s when Major knows he has made it all the way down at that point — but that is a few episodes away.Does Ravi (Rahul Kohli) know about Major’s drug problem at this point?ROB:  I don’t think he knows at this point.How soon before everyone finds out what is going on with Major?ROB: Pretty quickly.  It’s hard to hide and Ravi picks up on it pretty soon.  We were pretty excited to play the moment where Liv and Major have it out.  He certainly doesn’t want to have anything to do with her at the beginning of the season and at a certain point not too far down the road, she will have had enough and will confront him. That is one of the things we wanted to build towards that ultimately does give us a hefty dramatic scene with Liv and Major. And what about Blaine (David Anders) and his father, will we see more of that relationship this season?ROB:  We do bring Robert Knepper back on the show.  We thought he would be great and he was great!To find out if Liv can help save the man she loves from spiraling completely out on Utopian and find a way to help extract him from Max Rager’s evil clutches, be sure to tune in for all new episodes of IZOMBIE on Tuesday nights at 9:00 pm on the CW.