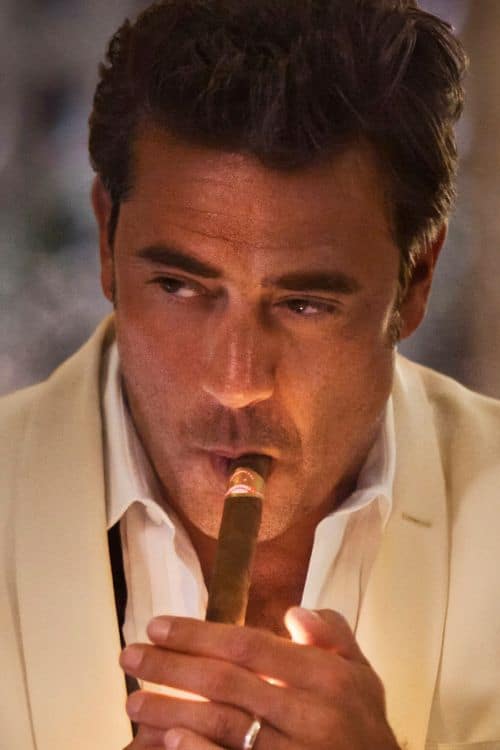 Starz’s MAGIC CITY second season premiere, “Crime and Punishment,” picks up right where season one leaves off. Ike (Jeffrey Dean Morgan) is still in jail for murder, and various people want him out for various reasons. Will Ike make someone’s fears come true before he can be released?

Eh, it’s hard to care, to be honest. As in the first season, the characters just aren’t that compelling. We’re talking the Mob and business dealings with Cuba and hotels, casinos, and houses of prostitution, and yet none of it holds that much interest, or magic, if you will, making the series unfortunately named.

What is wrong with MAGIC CITY? It’s hard to pinpoint the issue. Jeffrey Dean Morgan is a fine actor, as proven in Watchmen and Grey’s Anatomy, and perhaps he just isn’t given a lot to work with here. Instead of capitalizing on his brilliant knack for human interaction, he is often isolated, such as while sitting in a prison cell, and when he is around others, the million things he has going on in his head keep him from true connection. Ike can never be in the moment, which fails to provide the window viewers need to attach to him, too.

Maybe the stakes aren’t high enough. Ike is charged with killing someone, but we know the charges won’t stick. He’s the main character, and him getting convicted this early in the show’s run would run him out of business and kill the story of glamorous life at the beach. If one of his sons were arrested instead, that might be more uncertain, but that’s not the path the writing takes. Even Ike’s wish to risk his beloved hotel in “Crime and Punishment” to go run Cuba’s vacation industry doesn’t seem like a real threat, knowing it’ll never happen.

Similarly, Vera’s (Olga Kurylenko) turn in the boardroom isn’t compelling. The hotel is Ike’s life. As much as Vera’s involvement may temporarily strengthen her bond with her husband, we know Ike will return to run things soon, and so she feels like little more than a placeholder. A plot point that she is going to perform again to bring in guests and make them money is interesting, but barely addressed here, instead spending her time on something that doesn’t really advance her story.

And then there’s Ben Diamond (Danny Huston), the villain of the piece, who seems to have been de-clawed. He doesn’t make Stevie (Steven Straight) pay for sleeping with Ben’s wife, Lily (Jessica Marais), because Ben likes to watch. He doesn’t aggressively go after Ike because assuring Ike gets out from behind bars, something Ben makes happen, keeps Ike’s mouth shut. Instead of raging or worrying about Ike, we see Ben cavorting with hookers. So the teeth aren’t bared.

Now, there is a little bit of drama present. Jake Klein (Matt Ross), the State Attorney for Dade County, is determined to take down Ike and / or Ben, and doesn’t seem to be willing to stop until he does so. But his utter, complete failure to gain any traction in “Crime and Punishment,” his efforts swiftly rebuked, despite his crossing of the line to destroy evidence, makes him seems like little more than a joke. He’s a pesky annoyance, but he has neither the power nor the brains to strike an actual blow.

MAGIC CITY needs to be unpredictable. The title implies flash and spectacle, and instead we get slow-burn period drama, like in Mad Men, but without the outsize personalities, clever twists, or hidden meanings. What you see on the surface is what you get, and there’s a lot more attention given to the boring reality than the things that would set the people and locale apart.

Can MAGIC CITY recover from this? I think it can. The cast is solid enough. But it needs to ditch most of the supporting players and bring in some challengers who will really shake up Ike and Ben. Whether Ike or Ben gain alliances to use against one another, or they have to team up to combat an outside foe, anything that takes the two series’ leads and knocks them out of their comfort zones would be welcome. Jack may have been an attempt at this, but it’s time to drop him and move on. Bring in the bigger guns.

MAGIC CITY continues much the same as its first season played out Fridays at 9 p.m. ET on Starz.