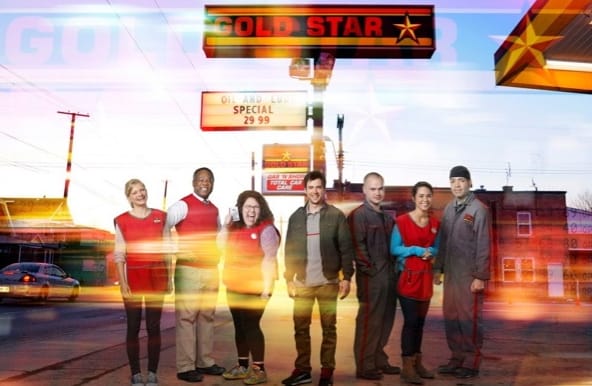 ABC’s LUCKY 7 is a show, with eight main characters mind you, about seven people who work at a gas station / car repair shop / convenience store called Gold Star, six of whom band together to buy a lottery ticket and win the jackpot. Well, actually, five of them put money in, with one floating a loan to the sixth person, which becomes an issue when it’s time for the payout. But despite all the numbers, which seems appropriate for a lottery premise, you get the idea.

The “Pilot” is mostly set up, which it sort of has to be. We get to meet everyone, and find out a little bit about them. A few arcs begin, but a lot is left to speculation, and it will be weeks before the direction of the series is really set.

The manager of the station is Bob Harris (Isiah Whitlock Jr., The Wire), whom is hit in the head with a bottle during a robbery the night the numbers are drawn. Unbeknownst to him, the attacker is one of his employees, Nicky Korzak (Stephen Louis Grush, Lac du Flambeau), a “reformed” con who owes some money to very bad people. Nicky’s brother, Matt (Matt Long, Private Practice), is in on the scheme even though he looks up to Bob as a mentor because Matt’s girlfriend, Mary Lavecchia (Christine Evangelista, The Joneses), who gives birth to his baby in the “Pilot,” is ready to leave Matt if he can’t get them out of his mother’s house. To make matters worse, Bob is the one who has to break the tie vote to decide if Matt, the guy who didn’t physically chip into the lottery pool this week, gets to share the fortune.

In this one-paragraph description alone, LUCKY 7 sets a lot up. We have an ongoing police investigation which will threaten Matt and Nicky’s freedom. We have serious guilt wracking Matt for what happened to Bob. We have Matt’s suspicion that his brother is one of those who voted to cut him out of the money. This drama will be going on for quite awhile!

Other winners have their own issues, too. Leanne Maxwell (Anastasia Phillips, Stoked) is a single mother who may not be who she says she is. Samira Lashari (Summer Bishil, Towelhead) is being pressured by her father, Ahsan (Rizwan Manji, Outsourced), to date a doctor (Gabe Grey). And my favorite, Denise Dibinsky (Lorraine Bruce, The Syndicate), strongly suspects her husband is cheating on her, unhappy the Denise has let herself go. Since, besides the Gold Star employees, only Matt’s girlfriend is a main character, not Denise’s husband nor Samira’s doctor, one can start to assume what will happen.

The seventh member of the staff is Antonio Clemente (Luis Antonio Ramos, The Ruins). Antonio decides to save his money, sitting out for many lottery pools now, to spend on his wife, Bianca (Alexandra Castillo, 2012). Bianca is understandable upset, but professes that Antonio is a good husband anyway. I suspect this will cause tension as Bianca sees what being rich does for the winners. It also remains to be seen if Antonio can stay friends with his co-workers, which he is attempting to do, but also seems unlikely in the long-term.

I am intrigued by each and every one of these seven Gold Star employees. They all have something going on, and each actor fits nicely into the ensemble. Aside from Matt, LUCKY 7 doesn’t begin with its characters all looking young and hot, which will set it apart from many other TV dramas. They are on the poor end of the economic spectrum, so their lives will change more than most would. And the story seems fresh and different, giving us a serial drama that isn’t already mapped out.

The problem is, there have been others shows that seem similar to this one in nature in the past ten years, and none have lasted a full season. Whether it was 2006’s Windfall, which also concerned lottery winners, 2005’s Reunion, about former classmates coming together, or 2006’s The Nine, which saw nine hostages from a bank heist bond from the experience, none really connected with viewers. It’s been awhile since the formula was tried, so maybe this time will be different, but history is not on LUCKY 7’s side. That’s too bad; I liked all three of those shows, and I like LUCKY 7. We’ll see if anyone else does, too. Dare we wish it luck?