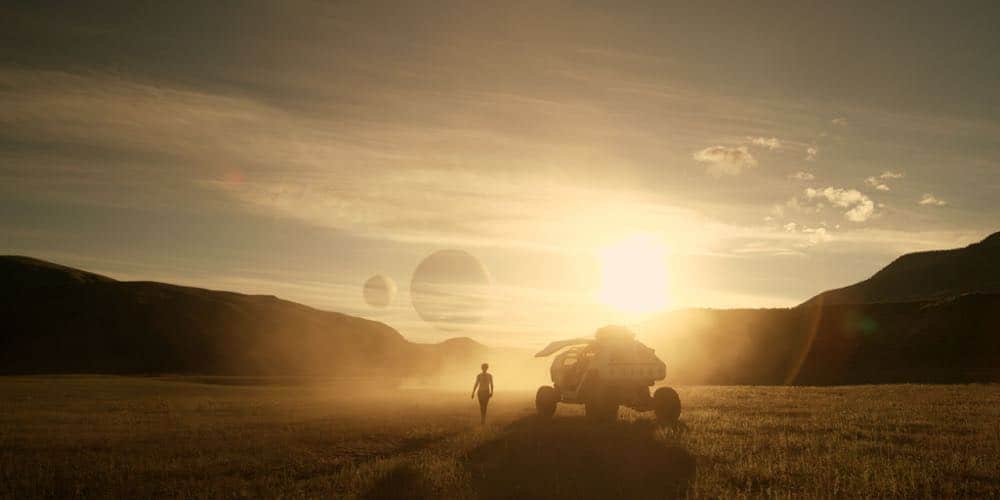 Netflix’s new drama series LOST IN SPACE is an instant classic. Not only is it based on the 1965 series of the same name, beloved by science fiction fans across the globe, Netflix’s Lost In Space is an amazing spectacle to behold. Having spared no expense, Netflix’s reimagining is simply glorious — from its stellar casting to its spectacular scenery and eye-popping cinematography — LOST IN SPACE is a space-adventurer series for the entire family. Focused on the tight-knit family of the Robinsons and a few of the colorful space-adventurers that they encounter after their spaceship crash lands on an undiscovered planet, LOST IN SPACE smartly focuses on the love and bonds that draw them closer in the face of unrelenting danger. While at this year’s WonderCon in Anaheim, the cast and creators took the time to share a bit more about their daring and adventure-filled series. In a press interview, executive producer Zach Estrin and star Mina Sundwall talked about her character, Penny Robinson, and the jaw-dropping adventures of the Robinsons.

At what point did you start to feel a little more awe-struck and impressed with the show you’re actually starring in?
MINA: I think the second that I started to see a little bit of what all of the writers and all of the producers were seeing in their heads. Because we work with so much green screen, I could never possibly see what they were seeing. The second that I got to see on screen what had been inside of somebody’s else’s head, that was what blew me away.

The show is very visual, but the characters are also richly drawn.
ZACH: Thank you very much. They were well written, but they bring them to life in a way that is fantastic.

What was the challenge of writing for a series that was made so many decades ago and making it modern now?
ZACH: In a strange way, I would say “challenge” wouldn’t be the thing. It’s like the gift of doing that. And I don’t mean that in a political answer-y way. It is that there was a reason why this show resonated with people when it happened. For us, it was looking at that and staying true to that. Obviously, tone-ly it’s different and it was meant for a certain time and a certain audience and the characters were drawn in a certain way, but at it’s core, it was this family that made me want to be part of them and then go on an adventure with them. It’s aspirational. These were good people. So there was this great concept just sitting there waiting to be done the right way. I think we’re in a time right now where a show that’s about hope and about people who love each other is a very nice way to look at the future — versus there’s really cool stuff that’s being done where the future is dystopian and dark and everybody’s in conflict. This is a really nice way to give you something different.

There is a lot of dystopian television movies as of late, so it’s interesting you chose to do something so familial and heartwarming. At the same time, I think you’re right, it hits the perfect time when people are craving something like that. So it’s been a kind of cool thing to discover.
ZACH: Thank you very much. That’s our hope. We had no idea. We wrote this thing a long time ago and we’ve been living with it for so long, and today is the first day where you get to actually talk to people who have seen it besides us.

It is addictive, which is probably the biggest thing you need right now. Mina, maybe you could talk a little bit about the dynamics of working with the other actors on the show.
MINA: The first time we ever shot together was the opening scene with the crash, and if that’s not a bonding moment. I think we automatically established this family dynamic between us right then. Being on set is with Molly always feel like she is right there if you need a hug or you get too rowdy and you need a time out. She’s there for either side. Being with Taylor is quite literally like the sister I never had. We’ve seen each other at our worst and we’ve seen each other at our happiest. It’s lots of fun. Being with Max is also the younger brother that I get to pick on the whole time. It just feels like we bounce off each other so well in work and in life that it feels natural.

Of course there is another family element added right away, the robot. It’s very interesting seeing his dynamic with each of you. So what was it like to create that for Penny and the robot?
MINA: First, I tried to think because she’s in complete awe of the robot, like every movement and every reaction is amazing. Also thinking from Penny’s point of view, there is this idea of the jealousy aspect and the love-hate relationship between them. It’s like you’re brother brought this dog home and it’s kind of scary and serious and you don’t really know what to do with it. But also, it does everything for him at the same time. It was really acknowledging that part to make this kind of relationship between them.
ZACH: Despite dropping something in your family, it changes all the family dynamics that are there.
MINA: For better for worse.
ZACH: Yeah, and especially when you don’t know anything about that new element that’s been brought in. I feel like because all these characters are so well rounded and multidimensional they of course are going to have a reaction — and some people have trust issues with it.

It also seemed like he almost has his own reaction. The robot is not just this stoic entity. It’s definitely a sentient being and he develops a rapport with each of them — even though he does favor Max.
ZACH: One thing I noticed is — you refer to it as “he.”

True. I’m not sure why I choose “he.” I think that it has to do with its posture — because he hulks up where a women typically doesn’t use that posture and the way he maneuvers is very dominant, and women typically don’t move that way. So I think that’s why I gave it that distinction.
MINA: “Danger, Will Robinson” is what he says.

Yeah, so maybe it’s the voice. I don’t know.
ZACH: The voice of the robot is actually Max, who plays Will Robinson. Because from a story standpoint, the robot doesn’t have a voice. But when he connects with Will in the pilot, and in that scene in the pilot, he say’s the word “danger” and the word “Will” and the word “Robinson.” Will says this himself in the tree. So the robot is just parroting back those words that he heard in that circumstance. So it made perfect sense, he’s really just repeating the sound that he’s learned from this boy. And now I’ve just said “he”!
MINA: [Laughs] I was literally about to say, “if he doesn’t call himself out, I’m gonna do it!”

Why would you describe the robot as masculine? I mean, he’s an alien life form.
ZACH: [Laughs] I don’t know why I did. Apparently, we live in a weird patriarchal society where we think that men are gonna behave that way.

I made my determination that based on posture. Because in the film ALIEN, the creature is female and yet she moves in a specific way that reminds you of female movement. So I don’t know why, but for your robot, I think I picked that up because of that movement. Subconsciously, it seems we’re all getting that same impression — or maybe it’s because you used Maxwell’s voice.
ZACH: The voice of an 11-year old boy.

Of course the robot is not the only entity that they bring into their lives. There’s Dr. Smith, who I wouldn’t even describe as a welcome entity, but they don’t seem to know that yet. These people really don’t have a perception of danger to themselves. She is a chameleon. Yet she strikes me as the bigger danger at this point.
ZACH: She’s a master manipulator. At least, in our conception of her, she sort of senses what the family wants or needs — and she knows how to play that role to each person. So to one character, she might be the nerdy aunt, to another one, she might be a sister, and to another one, she might be a little seductor. She puts on different hat for what she needs to be and this family is not quite aware of what is entering their lives.
MINA: Or prepared.
ZACH: Yes.