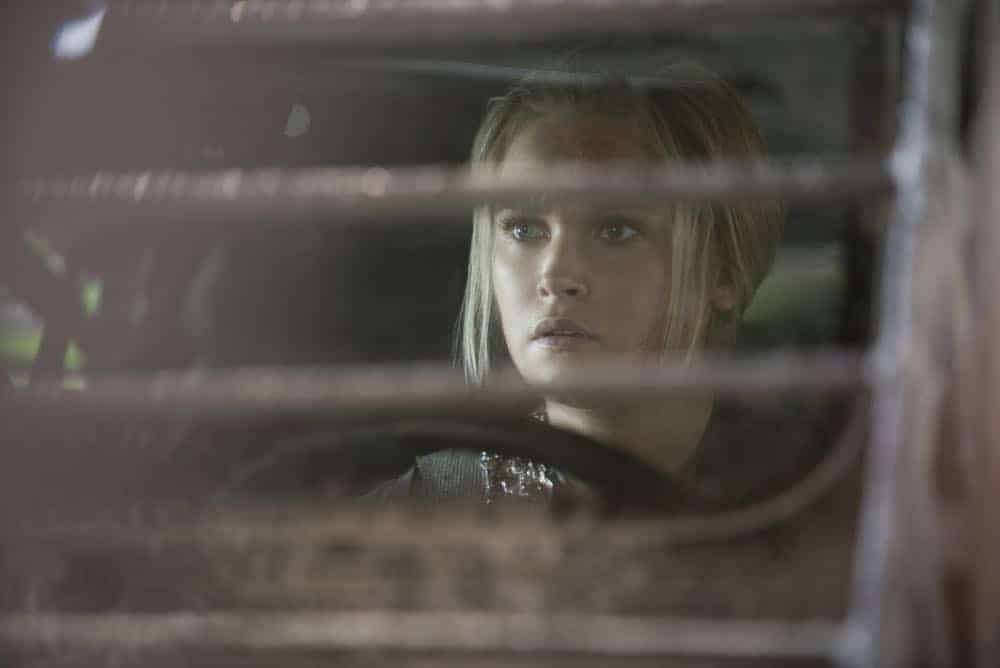 Where We Left Off

In the final days on Earth, Praimfaya was about to scorch the planet and it was a race to survive the literal Hellfire being rained down upon them. It sent 1,200 of WonKru into the depths of an apocalyptic bunker. It sent SpaceKru fleeing into space and back to the Ark. And it left Clarke badly burnt in Becca’s lab, seemingly to her death. But as we have seen time and time again, there is no killing Clarke Griffin (Eliza Taylor) — she will always be the last man/woman standing, and Praimfaya was no match for the newly minted NightBlood.

As a small teaser to tide viewers over during the long 11 month hiatus between the Season 4 finale and the Season 5 premiere, THE 100 gave a small preview into Clarke’s life 2,199 days later. That’s right, the story picks up 6 years later with Clarke still sending daily radio messages out into space, including her final message: “Here we go again. Bellamy: if you hear me, I’m still alive. I don’t know why I still do this every day — maybe it’s my way of staying sane, not forgetting who I am, who I was. It’s been safe for you to come down for over a year now — why haven’t you? The bunker’s gone silent too. We tried digging them out for a while, but there was too much rubble. I haven’t made contact with them either. Anyway, I still have hope. Tell Raven to aim for the one spot of green and you will find me. The rest of the planet, from what I have seen, basically sucks. . . Never mind, I see you.”

But to Clarke’s horror, the spaceship about to land was not SpaceKru. It was the Gagarin prisoner transport vessel, presumably from Eligius Corporation’s Penal Mining Colony that had been in cryogenic-sleep for over a hundred years.

The Time Jump and Timeline

Season 5 picks up literally seconds after the Season 4 finale. But before it can get to that point, there are a few key flashbacks that show Clarke’s survival after Praimfaya and how she and Madi (Lola Flanery) first met and the discovery of Eden — the last habitable place on Earth. There is also a quick peek at how SpaceKru is faring in their space odyssey. There is also a flashback into BunkerKru’s initial days and the tribulations they encountered as Wonkru struggled to find common ground — and it sheds light on how Octavia (Marie Avgeropoulos) exerted ruthless control over the unruly masses forced to live together in the bunker.

Outside of the flashbacks, the events in episodes 501 through 504 take place within just a few hours. The time lapse between Clarke spotting the prison transport and the events that happen in episodes 501 through 504 transpire very quickly. It should be noted that Season 5 has been described as “one long movie” — and if the timeline is any indication — everything that occurs, between episode 501 and episode 513, happens within hours.

As promised in the multitude of cast interviews over the past 11 months, Season 5 will provide all the longed-for reunions— just some sooner than others. The arrival of the prisoner transport brings everything to a boiling point immediately. Clarke and Madi are the first to react and their survival becomes the first imperative hurdle. If only BunkerKru and SpaceKru could be enlisted to aid Clarke and Madi. THE 100 does a fine job rectifying the seemingly insurmountable distances between all our heroes, but it does take a few episodes.

In addition, each reunion is equally heart-felt, and act as a balm for the tormented souls who have spent 6 years apart with no way of contacting each other and not knowing if their friends and loved ones even survived.

That said, the reunions are wonderful. Each will make hearts burst with joy — theirs and ours.

Counterbalancing all the joy in finding out how our heroes survived and thrived, there is a lot to be worried about with the arrival of the Gagarin prisoner transport. First and most significant, there are nearly 400 prisoners to contend with — some in cryogenic-sleep and a fair number who are wide awake and who have come to claim Eden as their own. The hundred years in space has convinced the Eligius prisoners that Earth is the only habitable place left in the universe and they are ready to fight for it — and they are much better armed than anything SpaceKru, BunkerKru or the NightBloods have at their disposal.

Notable new faces among PrisonKru are the NewKru: Charmaine Diyoza (Ivana Milicevic) — a general, Vinson (Mike Dupond) — a serial killer, McCreary (William Miller) — a former mob enforcer, and Zeke Shaw (Jordan Bolger) — an explorer. Zeke is the only one who might have a soul amongst the hardened criminals abroad the Gagarin. But no one should trust him either.

Then just who Shannon Kook portrays will remain a mystery until the Season 5 finale. My guess is his character is part of the real reason the the Gagarin has returned to Earth — a mystery that unravels slowly this season. Look for a hint of it to be revealed at the end of episode 504.

Amidst the arrival of the Gagarin prisoners, and the ensuing events, there is something else going on. Pay close attention to the significance of who ends up where, particularly at the end of episode 504, when there is a shift in the kaleidoscope. Who comes and who goes — and why — is key. Listen very carefully to what Charmaine Diyoza says. She is the holder of the secrets.

To see how our heroes survived and what changes occurred during the 6 year time jump, be sure to tune in for the Season 5 premiere of THE 100 on Tuesday, April 24th on the CW. Then tune back in on May 1st for episode 502 “The Red Queen” to see how the BunkerKru survived, and May 8th for episode 503 “Sleeping Giants” as fates begin to align, and on May 15th for episode 504 “Pandora’s Box,” which opens up a mystery that affects them all.

Favorite quotes from 501:
“You like being the hero — except up here, there are no heroes”
“That’s the thing about happily ever after — it’s harder than it looks”

Favorite quotes from 502:
“We’ll survive — we’ll just wish we didn’t”
“When Hell breaks us, it breaks us fast”

Favorite quotes from 503:
“That was fun. We should do that again sometime”
“You’re right, dying alone would have sucked”

Favorite quotes from 504:
“And they call me the cockroach”
“Our survival instincts suck”

More clues on how Bellamy, Murphy and Monty fared during the 6 years in space can be seen in our video interviews with Bob Morley, Richard Harmon, Christopher Larkin and Jason Rothenberg at WonderCon 2018:

Other fun tid-bits were also revealed at Unity Days 2018:
https://seat42f.com/the-100-scoop-what-we-learned-and-loved-from-unity-days-2018.html

And as a refresher, from THE 100 Season 4 Finale: Clarke Griffin, The Girl Who Waited
https://seat42f.com/the-100-season-4-finale-clarke-griffin-the-girl-who-waited.html