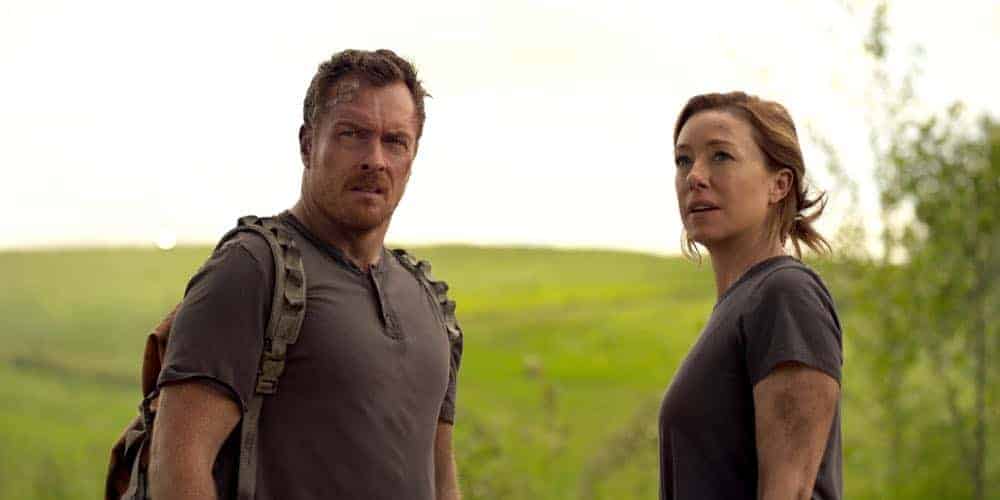 Netflix’s new drama series LOST IN SPACE is an instant classic. Not only is it based on the 1965 series of the same name, beloved by science fiction fans across the globe, Netflix’s Lost In Space is an amazing spectacle to behold. Having spared no expense, Netflix’s reimagining is simply glorious — from its stellar casting to its spectacular scenery and eye-popping cinematography — LOST IN SPACE is a space-adventurer series for the entire family. Focused on the tight-knit family of the Robinsons and a few of the colorful space-adventurers that they encounter after their spaceship crash lands on an undiscovered planet, LOST IN SPACE smartly focuses on the love and bonds that draw them closer in the face of unrelenting danger. While at this year’s WonderCon in Anaheim, the cast and creators took the time to share a bit more about their daring and adventure-filled series. In a press interview, stars Toby Stephens and Molly Parker talked about their characters, the husband and wife team of John and Maureen Robinson, and the grand adventure they are faced with.

Having seen half of the first season, I was absolutely awestruck watching it. When did you start to feel like this show was going to be something larger than what you might have envisioned from just reading the script?
MOLLY: [Laughs] You know, I’m still not sure.
TOBY: The thing is, when you’re starting a series, you just don’t know what it is. It was actually only when I watched the first episode that I went, “Oh, that’s what it is!” I read the script and I kinda went, “This is kinda cool.” I really like the way they were faithful to the original and yet they jazzed around it. It really feels much more real. When you’re filming it, there are these huge green screens everywhere and you just don’t know what’s gonna be there. They say, “there’s a huge spaceship here” and you gotta take their word for it.
MOLLY: To be honest, I don’t know that I would have wanted to do this if it hadn’t been Netflix. I knew they would put the resources into it to make it believable.

It’s gotta be the most expensive thing I’ve ever watched on television — at least it feels that way when you watch it.
MOLLY: It’s true that it feels that way. At the same time, for all of those resources, these writers wrote scripts that were so surprising. By the time you got to reading the seventh one, you’re going, “Really?!”
TOBY: [Laughs] And “how the Hell are they going to do all this?!”
MOLLY: To make that happen, they were really ambitious. Every one of them — the scale was massive. It’s just hard to imagine how that’s going to work because so much of it is done in post.

Did you ever have a moment where you felt, “oh my God I’m having chills that I’m actually a part of this project”?
TOBY: I think there were. There were moments, like when I saw the robot and when we were first working on the Jupiter. You see the beautiful finish that it had. I was just like, “This has been a fantasy of mine since I watched the movie Star Wars, when I was a kid. I mean I love Star Trek, I love Star Wars, I love the Alien movies, I love 2001. I’m a huge sci-fi fan. Suddenly finding yourself in this situation where you’re going, “I’m in a spaceship, in a space suit, and I’m playing a real person, and I’m working with Molly Parker!”
MOLLY: [Laughs] It does feel quite not real.
TOBY: That was pretty amazing. But also, at the same time, when you’re starting a series you just don’t know what it’s going to be and you don’t know whether, “Is what I’m doing any good? Is this going to work?”
MOLLY: There’s just so many things —
TOBY: — you just don’t know.
MOLLY: You have to come together for something to really work. We have an incredible cast.
TOBY: Also, it’s the writer’s show. There were quick to have had the vision. They knew what they want they aspired to be. They realized it. You kind of go, “Well, that’s pretty amazing!”

Both of you did a lot of work as well, like the amazing family unit. It made us as viewers want to be a part of it. If you don’t feel that right away, it’s hard to keep watching. But I wanted to be part of that family right away — even though it is somewhat dysfunctional and they all seem to have their own issues — I still thought, “Wow, these people still love each other!” You feel that — and yhat’s something we all crave a little bit in our lives, even when we’re watching television. So what was it like working with the younger actors and developing that family bond?
MOLLY: It’s really easy because they’re really good people.
TOBY: And really good actors.
MOLLY: I say this with all love for many children: you don’t always know what you’re going to get. Mostly, it’s because kids have just gotten in the business, and if they’re too little — it’s quite heartbreaking sometimes to watch that. These actors and their families are really good people. That felt great and was fun, and funny — and this guy [Toby] is hilarious! I always hear people on TV shows say, “We’re like one big happy family” or something, and I never believe it, actually, when they say it. But we actually kind of are. I enjoy just playing that kind of iconic, matriarchal “mother bear.” Maureen is fierce.

She’s more than that — she’s a bad-ass! I couldn’t believe what she did by episode five. I had a kind of preconceived idea that the father-figure would be the dominant one in the family. And yet, Maureen becomes quickly established as the leader. It’s her family. She controls this unit and she decides who does what — and yet it’s naturally accepted. I appreciated, as a woman, seeing a woman in charge of her family and her career, and everybody accepts it just fine. And she thrives. They thrive. Oddly enough, these children are thriving under that matriarchal environment. As estranged as your characters’ relationship might be, they still had natural love in there so that they respect each other enough to work through it so they could do their family thing. There was some real nuance to that dynamic, which I appreciated as a modern viewer.
MOLLY: Thank you!
TOBY: I think also, when Molly and I were first talking about them as a family and their relationship, we were like, “It has to be real.” It has to have a kind of texture of these are real family and this is a real couple for anybody to care about what happens to them.
MOLLY: I think these people really love each other and there are circumstances that have made their life heartbreakingly impossible.

But they don’t throw their relationship away either. There is a tenacity in striving to protect their family and advance together — to survive and thrive. It’s really just something that was embedded into the show.
TOBY: I think it’s an important tone to have at the moment. The world is a very dark and depressing place at the moment. There’s wonderful things happening in it, but it’s tough. At the same time, you turn on TV and a lot of the drama on it is pretty depressing. It’s brilliant and fantastic, and all of that stuff. But it’s quite dark, a lot of it. What’s nice is the aspiration: this is about people trying to be better. I think we really need that. It’s not mawkish or sentimental. It’s about people trying to be better people. I like watching that.
MOLLY: And struggling through — they just happen to be lost in space.
TOBY: Lost in space billions of miles away from home.

You guys also developed an interesting dynamic by you actors. I found the moment of silence were very powerful. A lot of families, there is a lot of silence. It’s not antagonistic or dark or anything. It’s just an acceptance of that’s the way families operate. I found that interesting, as actors, that you were very comfortable in turning your backs when talking to people. Assuming that everything was dynamically working, that’s what families do naturally.
MOLLY: The art of it. The stakes are so high for them in these situations. They’re operating on a level of adrenaline — there’s a focus on what they have got to do. To play layers — which is always the best thing to get to do — these people have secrets — and just because we’re doing a scene where were dissecting an alien eel, doesn’t mean there isn’t also things going on under the surface between everybody. That’s fun.
TOBY: I remember Zack [Estrin] actually came after we’d been filming after a certain period of time — I think we were about two months into it — and I just didn’t realize how real these situations were and how the stakes are really high — whereas the original show was kind campy and it was safe. I could see this doubt in Zack’s mind that it was going to be too heavy for families that watch and I totally get that, but, in the end, he turned around and went, “Actually, it’s great that it’s got high stakes because people will invest in it. They’ll be willing you through it — rooting for you.”

To see how the Robinsons fare in the face of terrifying obstacles and seemingly impossible circumstances, be sure to check out Lost In Space when it premieres on Friday, April 13th on Netflix. Prepare to fall under its mesmerizing spell as you will quickly binge-watch the entire first season and then will want to tell everyone you know all about it!