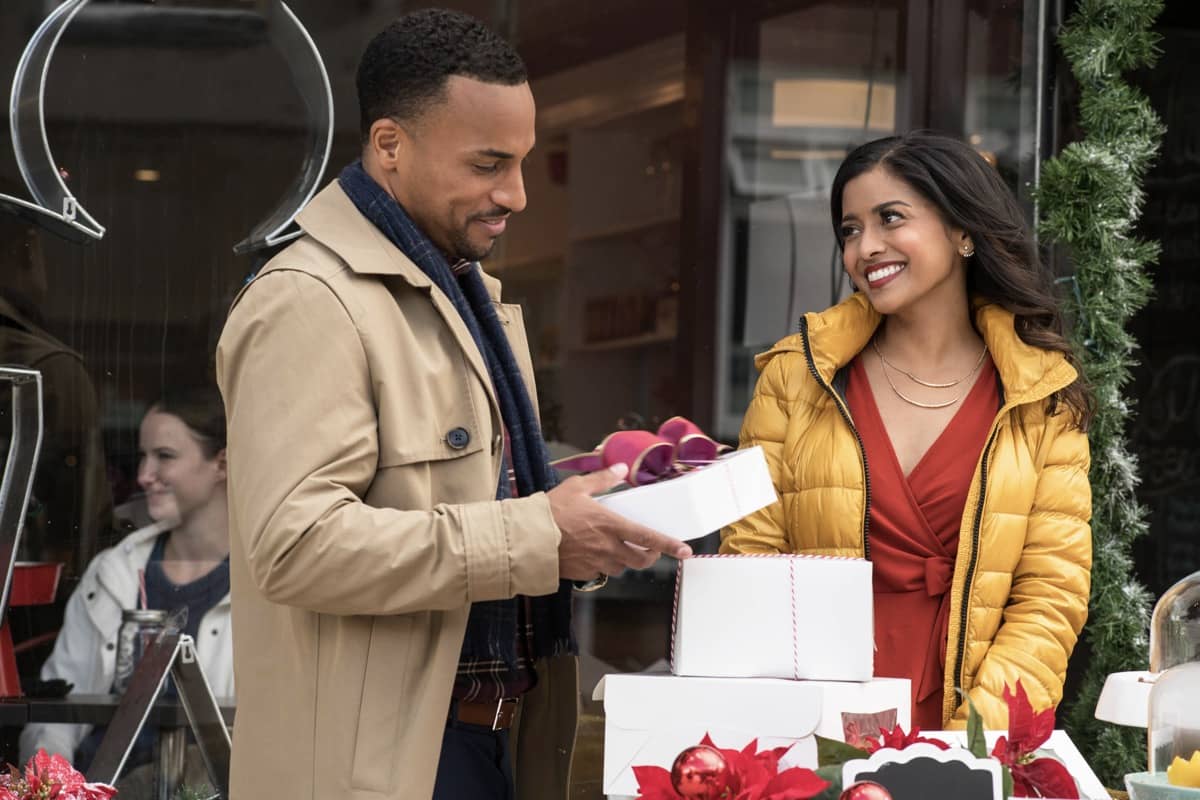 Lifetime announces a new way for fans to engage with their favorite stars from the premiere entertainment destination for women. Lifetime: Live!, a series of fan-focused live virtual events will further extend the content experience for audiences. The series officially kicks off this Thursday, October 29th with It’s a Wonderful Lifetime: Live!, another opportunity for fans to celebrate the holiday season with stars from the It’s a Wonderful Lifetime holiday movies.

Viewers are invited to register now for the free virtual events (full details below) at: https://www.lifetimelive.com/experiences/

“Lifetime is the #1 holiday movie destination in the U.S. because our movies have attracted and held such an extensive base of passionate, loyal fans,” said Lance Still, Senior Vice President, Consumer Enterprises, A+E Networks. “It’s a Wonderful Lifetime: Live! is the first set of our ongoing virtual events under the Lifetime: Live! banner, and our chance to give back to the greatest fans in the world with access to the talent and the movies they love. Lifetime: Live! is part of Lifetime’s innovative 360 approach to engage our viewers throughout the holiday season and year-round.”

Amy Winter, Executive Vice President, Head of Programming, Lifetime added, “We are incredibly proud to lead our It’s a Wonderful Lifetime campaign in ways that connect with our fans and audiences in a big way. Our slate of movies is all at once relevant, meaningful, and magical – because this year it’s especially true that we all need a little more of the holidays!”

Lifetime officially kicked-off its holiday movie campaign on Friday, October 23rd with the premiere of Christmas on Ice. The network previously announced a partnership with Emmy®-winning lifestyle expert Sandra Lee who will host a range of holiday-themed segments including baking, decorating and gift giving; as well as the debut of its first float – Christmas in Town Square – in the 94th Annual Macy’s Thanksgiving Day Parade®. Lifetime also announced a number of marketing integrations and sponsorships for It’s a Wonderful Lifetime that include Mrs. Fields, JustFab, P&G, Bailey’s, Marathon Petroleum, Shriners Children’s Hospital and Kohl’s.

The Christmas Yule Blog – Featuring Sara Canning and Zak Santiago
Caroline Williams (Sara Canning), a well-known social media travel writer, is given the assignment to cover a hundred-year-old Christmas parade in the small town of Carte De Amor, New Mexico. Not excited about the assignment, Caroline goes anyway and meets a high school music teacher, Oscar Ortiz (Zak Santiago), who introduces her to a side of Christmas that she has never seen, with different traditions and meanings. In the twelve days before Christmas, Caroline falls in love with Christmas all over again and finds true love for herself.

A Welcome Home Christmas – Featuring Jana Kramer and Craig Morgan
Chloe (Jana Kramer) has always supported various military organizations, including the town’s Army toy drive for Christmas. This year, she is paired up with Michael (Brandon Quinn), a vet who recently returned home, and together they recruit other veterans and active military personnel to help in the cause. As the community gears up for the Officer’s Christmas Ball, where all the kids will meet Santa Claus and receive their gifts, Michael and Chloe begin to realize the greatest gift this season has been each other’s company. Craig Morgan also stars.

Christmas on the Vine – Featuring Meredith Baxter and Julianna Guill
Brooke (Julianna Guill), a young marketing executive, goes back to her hometown excited to relive her Christmas memories, while helping a struggling family-owned winery. Her marketing assignment involves an unlikely partnership with Tyler (Jon Cor), the charismatic, yet stubborn owner of the winery. Brooke quickly learns that the town’s Christmas spirit has disappeared due to a wine conglomerate buying out all of the local wineries. Determined to bring Christmas back to the town, Brooke and Tyler work together and discover they share more than a love for wine.

Christmas on Wheels – Featuring Tiya Sircar and Michael Xavier
Ashley (Tiya Sircar) returns to her small hometown to care of her uncle who recently broke his ankle. When she learns that he has sold her Mom’s vintage red convertible, a car that holds many wonderful Christmas memories for Ashley, she is disappointed. But with the help of Duncan (Michael Xavier), her uncle’s attorney, Ashley is reunited with the car and restores it to its former glory, and fills it up with gifts for the community – just as her mother used to do. As she reconnects with happy Christmas memories, she feels torn about her plans to return to the big city and what she may be leaving behind.

The Christmas Edition – Featuring Carly Hughes, Rob Mayes and Marie Osmond
It’s Christmas time and Jackie (Carly Hughes), an up-and- coming journalist, finds that her life is at a crossroads until she finds an unexpected opportunity – to run a small-town newspaper in Alaska. Jackie decides to give it a try and relocates to the small picture-perfect small town. Using a series of Christmas articles, she’s able to quickly return the newspaper to profitability, and soon falls in love… both with her new home and the handsome son of the paper’s former owner. However, when her old boss announces plans to take over the paper for herself, Jackie will need a Christmas miracle to save it. Aloma Wright also stars.

Dear Christmas – Featuring Melissa Joan Hart
Natalie Morgan (Melissa Joan Hart) is the host of a popular podcast, Holiday Love, which shares true stories of holiday romance with its listeners. While to the outside world and her listeners everywhere see Natalie is an expert on romance, she’s never truly experienced a romance of her own. As Natalie prepares to embark on a promotional tour for her new book, she stops back home to spend Christmas with her family where she unexpectedly begins to experience her own holiday romance as sparks ignite with local firefighter, Jack (Jason Priestley). Dear Christmas also stars Robin Givens, Ed Begley Jr., Faith Prince & Nicky Whelan and includes cameos by Jamie and Doug Hehner (Married at First Sight: Couples Cam) and Hilarie Burton and Antwon Tanner (One Tree Hill).

People Presents: Once Upon a Main Street – Featuring Vanessa Lachey, Ryan McPartlin and Patrick Duffy
Amelia Lewis (Vanessa Lachey) is super excited when she buys an available storefront, planning to open a year-round Christmas shop. But her celebration comes to a screeching halt when she discovers that Vic Manning (Ryan McPartlin) has also bid on the property. Amelia and Vic have the same idea, get to the seller—Elder Dubois (Patrick Duffy) in the next town—and convince him to sell his space to them. Despite the holidays, Elder is down in the dumps. It’s the first Christmas without his wife, and he’s in no mood to chair the decoration committee for the “Battle of the Main Street” yearly holiday competition with the neighboring town. Hoping to win favor with Elder, Amelia and Vic volunteer to take over his duties. After continually bickering and trying to one-up each other, the two combatants learn to work together and even get the merchants on Main Street to put aside their differences for the greater good. Everyone, including Amelia and Vic, realize that compromise is the key that leads to a happy—and romantic—ending.

Christmas Ever After – Featuring Ali Stroker and Daniel di Tomasso
Popular romance novelist Izzi Simmons (Tony® winner Ali Stroker) spends every Christmas at her favorite snowy bed & breakfast, but this year, she’s faced with an impending deadline and a severe case of writer’s block. Luckily, inspiration strikes in the unlikely form of the B&B’s new owner Matt (Daniel di Tomasso), who bears an uncanny resemblance to the handsome hero from Izzi’s novels. As both partake in the lodge’s annual itinerary of Christmas activities, Izzi’s writer’s block is cured and the first pages of her and Matt’s own love story may just be beginning.

The Christmas Setup – Ben Lewis, Fran Drescher, Ellen Wong and Chad Connell
The Christmas Setup follows the story of New York lawyer Hugo (Ben Lewis) who heads to Milwaukee with his best friend Madelyn (Ellen Wong) to spend the holidays with his brother Aiden (Chad Connell) and his mom Kate (Fran Drescher), who is also in charge of the local Christmas celebrations. Ever the matchmaker, Kate arranges for Hugo to run into Patrick (Blake Lee), Hugo’s high school friend and secret crush, who has recently returned after a successful stint in Silicon Valley. As they enjoy the local holiday festivities together, Hugo and Patrick’s attraction to each other is undeniable and it looks as though Kate’s Santa-style matchmaking is a success. But as Hugo receives word of a big promotion requiring a move to London, he must decide what is most important to him.

A Sugar & Spice Holiday – Featuring Jacky Lai and Tony Giroux
The movie A Sugar & Spice Holiday follows Suzie (Jacky Lai), a rising young architect, who returns to her small hometown in Maine for Christmas where her Chinese-American parents, Pete (Tzi Ma) and Mimi (Lillian Lim), run the local Lobster Bar. Following the loss of her beloved grandmother who was a legendary baker in their community, Suzie is guilted into following in her grandmother’s footsteps by entering the local gingerbread house competition. Teaming up with an old high school friend Billy (Tony Giroux), who grew up to be a catch, Suzie must find the right recipes and mix of sugar and spice infused with her cultural traditions to win the competition and perhaps find some love in the process. A Sugar & Spice Holiday also stars renowned Asian American actor Tzi Ma.

As the #1 holiday movie destination, Lifetime’s 2020 It’s a Wonderful Lifetime slate, beginning October 23 and continuing through December 25, will feature 30 new movies – the most of any one network – and over 1200 hours of holiday programming. Because the holidays are for everyone, this year Lifetime dives deeper into their commitment for diverse storytelling and inclusivity with The Christmas Setup, the network’s first holiday movie with a LGBTQ romance as the lead story; A Sugar & Spice Holiday, its first holiday movie centered on a Chinese-American family; Christmas Ever After, its first movie starring a lead actor with a disability; and A Welcome Home Christmas, Lifetime’s first movie centered on a military vet, airing prior to Veterans Day. Lifetime brings viewers 10 weeks of holiday movies featuring some of television and music’s most beloved stars – so grab your family, friends and cup of cocoa, and get ready to enjoy It’s a Wonderful Lifetime.