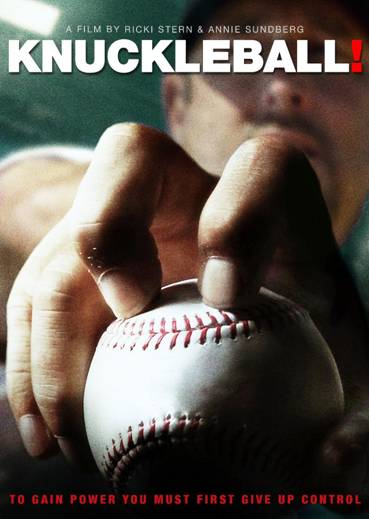 Seat42f and FilmBuff have teamed up to give THREE lucky winners a copy of KNUCKLEBALL on DVD. For a chance to win leave a comment below telling us why you want to add KNUCKLEBALL to your DVD collection. Only one entry per person. Contest ends April 10th. Winners will be notified on April 11th via email so make sure to use a valid email address when you post your comment.

The great baseball batting coach Charley Lau famously said, “There are two theories on hitting the knuckleball. Unfortunately, neither of them works.” This most disrespected, mocked and frustrating pitch is the subject of KNUCKLEBALL, the hit documentary about two master practitioners. It floats onto DVD from FilmBuff on April 2, 2013, with an SRP of $24.98.

From acclaimed filmmakers Ricki Stern and Annie Sundberg (The Devil Came on Horseback; Joan Rivers: A Piece of Work), this heartfelt, funny and deeply engaging film delves into the legendary subculture of the knuckleball and the brotherhood of men who share the drive, imagination and humility to throw baseball’s slowest, most disrespected and most mysterious pitch.

While pitchers with 100-mile-per-hour fastballs are accorded rock star status, the knuckleballer – whose ball floats toward the batter at just 60-70 mph – is held in something approaching disdain. This rare breed is often an older player who can no longer hurl with the force of his youth. His mysterious pitch is thrown with as little spin as possible (the ball is usually gripped with the fingertips rather than the knuckles), which causes the ball to flutter and drop haphazardly thanks to aerodynamics acting on the raised stitched seams. The ball heading slowly toward the plate can look extremely tempting to the batter – who will usually get nothing for his colossal swing except a strained back.

Filmed throughout the 2011 season, KNUCKLEBALL follows 37 year-old all-star R.A. Dickey of the New York Mets and 18-year veteran Tim Wakefield, formerly the oldest player in the major leagues and an icon of the Boston Red Sox. The film details their personal and professional struggles and triumphs while exploring the bond between them and the few living retired knuckleballers, including Charlie Hough, Wilbur Wood, Jim Bouton, Tom Candiotti and Hall of Famer Phil Niekro.

KNUCKLEBALL is the story of these extraordinary men, and the sacrifices they have made to a pitch that would come to define their careers and reputations.

“With elements of Moneyball and a twist of the narrative arm, this look at how Tim Wakefield and R.A. Dickey became knuckleball experts is a real kick,” wrote Joe Neumaier of the New York Daily News. “A first-rate sports documentary in any season,” said The New York Times’ Neil Genzlinger. “Immediately leaps near the top of the list of greatest baseball documentaries,” wrote Andrew O’Hehir of Salon.com. Ty Burr of the Boston Globe said, “The movie’s a must for baseball fans. … KNUCKLEBALL concerns itself with the long game, and it finds an unexpected poetry in motion.”