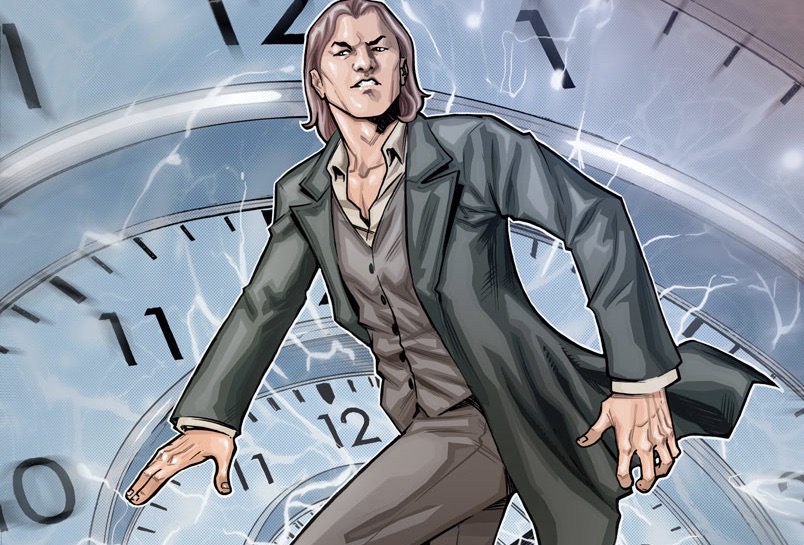 One of the most fascinating Valiant Comics’ universe superhero characters to come along in literally decades is Ivar the Timewalker. With his abilities to travel through time, heal faster and better than mortal beings, and his possession of immense physical strength, Ivar is a character whom everyone can admire – and there are even whispers that he might get his own movie from Valiant’s new owners, Dan Mintz & DMG Entertainment. Writer and Artist Barry Windsor-Smith created the beloved Valiant character originally. Ivar made his original appearance in the comic series Archer and Armstrong #8 back in March of 1993. This was also the flip book that contained Eternal Warrior #8.

About Ivar’s Character and Journeys Through Time

Ivar is beloved precisely for his “who gives a damned” rakish attitude. He time travels seemingly effortlessly throughout the ages, acting as a lightning rod for adventure. Ivar is also somehow immortal and uses his powers for good in an effort to master the mysterious time arcs.

Ivar’s character changed somewhat in the 1990s as he evolved. His actual name is Ivar Anni-Padda, but he easily goes by such aliases as Captain Ivarstadt, Adonis, Lord Mithras, Hermes, Zeus, Trismegistus, and of course the most famous one the Timewalker.

For some unknown reason, Ivar possesses the unique attraction to time warps. He pulls these to himself almost effortlessly. The hero then enters these time warps to begin a new adventure in another part of the world in a distant time. Through these time travels, Ivar remains young and is always healed. It is believed that this is the source of his nearly assured immortality.

His hardiness is the stuff of legends. Ivar can absorb small arms fire and only sustains minor damage. With a sniper bullet, artillery fire, machine gun, or similar weapons though, the enemies are able to cut him down where he stands. Ivar has grown through his many time traveling adventures, picking up useful survival skills along the way. The Wright Brothers taught him to fly, while D’artagnan of the Three Musketeers taught him swordplay. Jack Dempsey taught him how to fight well. Ivar is also known as the best sword master of all the ages.

Those who are more attuned to the Marvel and DC universes’ characters will be used to characters that essentially have one special power. This makes them easy to remember and keep up with, but it also means they tend to be more shallow and it’s not long before that power becomes, well, boring. Ivar is a breath of fresh air in that regard – such interesting and wide-ranging powers are sure to make him a hit with comic fan movie-goers looking for something to take them to the next level. You get the feeling that DMG Entertainment CEO Dan Mintz, who acquired Valiant Entertainment, already understands this when you listen to the interviews Dan Mintz has given on what excites him about the Valiant characters.

Ivar is only able to control where he goes in these time warps via his Interactive Navigational Computer. This alien device stays in tune thanks to the constant attention of his mate Mac. The Navigational device acts much like a tachyon compass. It displays to the traveler where he is on the earth and in what time, as well as where and when the next time arc will appear in future months. Ivar must travel to the physical location of these arcs in order to utilize them to navigate his way through the ages.

Thanks to the powers of this computer, Ivar does not miss time warps or need to spend a long time waiting for one to be attracted to him personally. He is able to keep on the move relatively often. Thanks to this handy piece of technology, Ivar is able to effectively control travel through time.

The warps unfortunately lead him to random epochs, but the computer makes it possible for him to reach the locale where the time warp will appear. He is then able to input the place and date that he wishes to go on the tachyon compass just before he enters the materializing warp. It helps him to more or less go where and when he wants to, with some notable exceptions of course.

This does not mean that Ivar’s method and results yield flawless results. There are numerous examples of things going wrong with his time jumps. He ended up in an Egyptian movie set in Hollywood in 1923 after entering a sun sign around 1423 B.C. Another occasion, the compass transported him up to 1939 where he danced a popular in the day jig known as the Big Apple. Another time he entered a warp in New York in year 1998 and this took him to York, England back in 1498.

The device finally broke down after suffering extensive damage in the field. Mac was able to repair and get it working again in the year 2000. During this computer device downtime, Ivar was forced to utilize an earpiece to attempt to navigate carefully around epochs as he randomly jumped through different eras. It is part of what fans love about his character that he refused to wait for the alien machine to be fixed to continue his quest.

Ivar is Well Prepared For Practically Any Eventuality

Ivar is a man with a plan. He possesses the necessary equipment and reputation in every era of time to accomplish his goals. He has set up several safe houses in various times and locations too. He has one in Woodstock, New York ready in 1814 that he has efficiently maintained for several hundred years. He also has the message boot situated from 1980 to 2033 in Edison, New Jersey.

Another huge resource that Ivar counts on is his universal translating device. He has also wisely acquired currency from many varying empires and ages over the years. These include Royal Sovereigns, Reich marks, historic U.S. dollars, and even buffalo nickels.