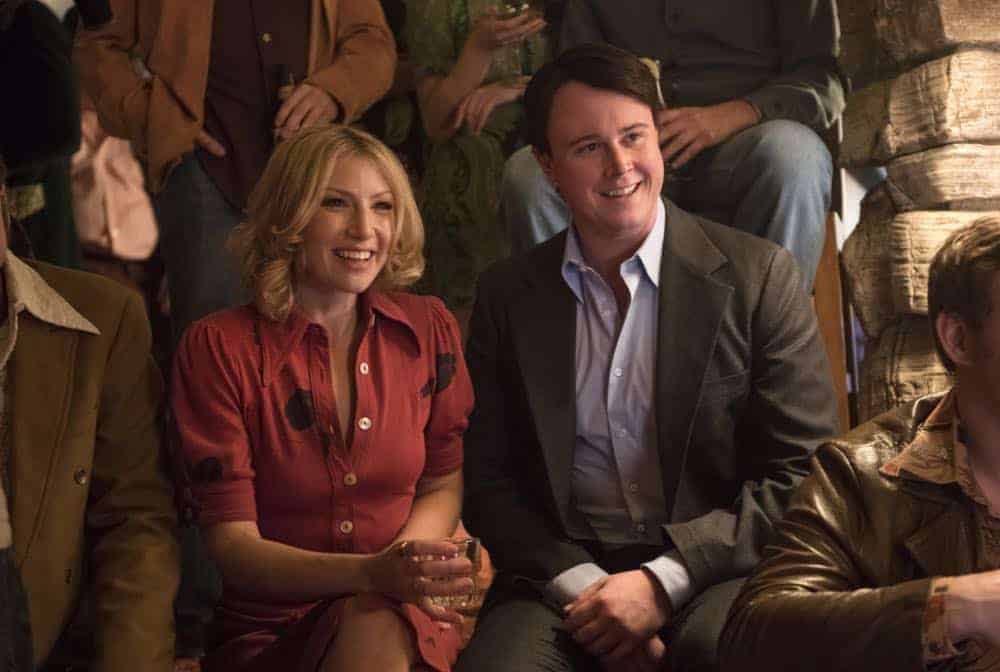 Goldie looks to expand her comedy empire with the help of legendary comedian Roy Martin (guest star Brad Garrett), while her estranged daughter Amanda (guest star Stefania LaVie Owen) resurfaces. Cassie awaits the premiere of her comedy special Girls Are Funny Too. Eddie and Adam ride the fame wave from Ron’s new sitcom stardom. Ralph, Nick and Bill hit the road on a comedy tour, where they have a run-in with the law. I’M DYING UP HERE Season 2 Episode 1 Photos Gone With The Wind.

In season two of I’M DYING UP HERE, the 10-episode SHOWTIME® drama series about a fictionalized group of stand-ups in LA in the ‘70s, the dysfunctional family at Goldie’s splinters as golden opportunities come for some but not for others.

Whereas the first season was all about the struggle, with a Johnny Carson appearance being the light at the end of the tunnel, this season explores what happens once you get what you thought you wanted. What happens after Carson, after you land a role on a sitcom, when you get agents, opportunities, a comedy album, commercials, road gigs, love? Which relationships – which individuals – can survive success?

Goldie (Oscar® winner Melissa Leo) expands her comedy empire by partnering with legendary Vegas comedian Roy Martin (guest star Brad Garrett), while grappling with the toughest business of them all: motherhood. Her wayward 18-year-old daughter Amanda (guest star Stefania LaVie Owen) tests Goldie’s patience and limits as they try to repair old wounds. Cassie (Ari Graynor) wrestles with a secret from her past that both haunts her and drives her personally and professionally. Nick (Jake Lacy) also duels with demons from his past that make it harder for him to steer clear of his heroin addiction. Eddie (Michael Angarano) continues to pay his comedy dues (albeit working for his comedy hero Roy Martin) while his friendship is tested as Ron (Clark Duke) discovers success can be harder to navigate than failure. Ralph (Erik Griffin) is enjoying debauchery and excess on the road with Nick and Bill (Andrew Santino) when a bad experience causes him to re-examine his job, act and friendships. Adam (RJ Cyler) has a hit comedy album that opens the door to new opportunities and a hot romance. Edgar (Al Madrigal) and Arnie (guest star Jon Daly) start a risky business that threatens to end their business with Goldie.

Set in 1974, season two dives deep into timely topics: sexism, racism, homophobia, sexual abuse, religious contradictions, the hypocrisy inherent in deciding what is decent and what is obscene and the sacrifices so many women have to make in their personal lives in order to become successful professionally. In addition to Brad Garrett and Stefania LaVie Owen, Xosha Roquemore is guest starring as a ballsy new comedian, Dawn, along with Nicole Ari Parker as Gloria, the producer of Soul Train who is recently divorced and reclaiming her sexual mojo.