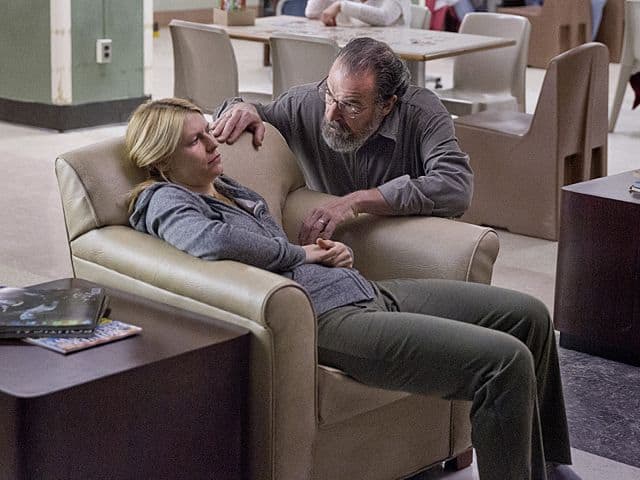 Showtime’s HOMELAND returns with the season three premiere “Tin Man Is Down.” It’s not just the Tin Man, whoever he may be, that is down, though. Two months after the events of last spring’s shocking finale, all of our main characters are struggling. Let’s just hope they can rise back up again before too long.

I am going to write in vague generalizations to avoid spoilers. Still, if you’d rather not know anything, bookmark this article and check back after the episode airs.

The CIA is facing a serious inquiry, with Congress hauling Carrie (Claire Danes), Saul (Mandy Patinkin), and others before them. This is something easy enough to see coming, as someone must answer for such a glaring gap in national security that allowed an attack to kill over two hundred people, including agents and leadership. Let’s just say that those running the panel, especially Senator Andrew Lockhart (Tracy Letts, Killer Joe), will not be stopping with their investigation until they get restitution for the American people.

What would make up for the attack to the public? Finding out who is to blame for not stopping it and seeing their lives ruined? The CIA suffered the worst of the blows, losing men, property, and face. It’s not quite understood why Lockhart and his colleague want to make someone else pay more, but they definitely are angry and are letting that anger out.

The question is, how will this showdown between Congress and the clandestine agency end? Can Saul protect the organization he is now running, as we saw in last year’s season finale? Can he shield the individuals who bear some of the responsibility? Will he be able to control the flow of information so that he has influence over the end result?

Saul is a great character, with a strong moral compass and oodles of intelligence. But “Tin Man Is Down” does not make things easy for him, as information gets to Congress that he’d rather keep from them. I won’t tell you what the information is or if Saul manages to figure out where the leak is coming from, but this is definitely some great drama for him to deal with, while also trying to find the terrorists responsible for the mess in the first place. Plus, we get to see him interact with both Dar Adal (F. Murray Abraham) and Mira (Sarita Choudhury), two relationships that are intriguing.

Not that “Tin Man Is Down” is all conversations and slow burn. There is some movement on the action front, too, especially involving Peter Quinn (Rupert Friend, now a series regular).  But that’s all I can say at this time, not wanting to give anything away, since Quinn’s is such a gripping subplot. I think we’re going to get some terrific stuff for him this season.

Carrie also has her own issues, both from the hearing and on another front. Let’s just say that she thinks she has it together, but does she ever really? It’s not exactly clear what Carrie is up to these days right away, however she still has some hanging threads left from the Brody (Damian Lewis) incident, and that will surely get resolution sooner rather than later.

As the discerning viewer may have predicted, the Brody family bears a horrendous fall out from their patriarch’s actions. We’re talking dark trouble on a couple of different fronts. It’s got to be incredibly hard to cope with learning one’s husband or father is a terrorist, or at least the media is reporting that he is one. Each member of the clan reacts in a different way.

“Tin Man Is Down” gives most of its Brody family focus to Dana (Morgan Saylor). Considering the conversation she has with her father last year, not too long before the bomb goes off, she feels particularly betrayed, and perhaps goes to the most extreme measures. I don’t know that the path she’s going down will be an improvement over her story arc last year, which fans either loved or hated, mostly the latter, but HOMELAND is definitely resolved to keep giving the young girl screen time, for better or for worse.

Jessica (Morena Baccarin) is perhaps less affected because she already has a rocky relationship with Brody throughout seasons one and two. She doesn’t view him through the hero googles that her children do or did. She’s also a strong survivor, though, having gotten through believing Brody was dead prior to the show’s start, and she’ll overcome the challenges she faces now. Perhaps her season three plot will center on her being the single mother who can support her family, stepping up even more when she must.

There are multiple main characters who do not appear in “Tin Man Is Down,” though I won’t get into which ones. This is a set up episode that does not give us everything we’ve been waiting for, but does get a lot of things going again.

Suffice it to say, HOMELAND remains a big-picture show, continuing the stories of last year while also telling new ones, but never at a quick pace. When season two began, I wondered if the show had lost something, not seeing right away how it could continue past the amazing stuff from the first year. I feel the same this fall, not sold on where the writing is going yet, but if last year is any indication, that will probably change relatively early in the run. There are some interesting things in this installment, but there is also a lot left unexplained and not going well. Whether it can take off and soar remains to be seen, but my guess is that it probably will.