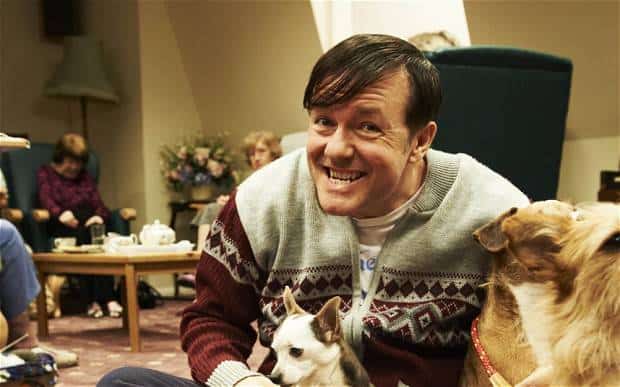 Ricky Gervais had made a number of incredibly funny comedy series, from The Office and An Idiot Abroad, to The Ricky Gervais Show, Life’s Too Short, and Extras. Now, he has set aside all of those shows to focus on a single project, which aired in Britain last spring, and is currently available on Netflix in the U.S.: DEREK.

DEREK is somewhat like Gervais’ other works. It’s a mockumentary about misfits who don’t gel well with the rest of society. Yet, they don’t care, living their lives in their own way, happy with who they are.

DEREK is also completely different than those others works. It’s not funny, and I’m not sure why it’s labeled a comedy, because it doesn’t appear meant to be so. The lead character is earnest and nice to a fault, a departure from some of the mean-spirited roles introduced earlier. And it’s incredibly sad, set in a nursing home, a place that lends itself to death and grief.

None of these things are complaints. It’s a brilliant, original work, unlike anything I’ve seen before, and definitely worth watching.

The titular character is played Gervais himself, laying to rest any doubts one may think of his acting chops. At first glance, Derek is not someone you may want to hang around. He’s awkward, unattractive, and intellectually stunted. He hunches over, makes weird faces, and often doesn’t understand what is going on. Some have called the character autistic, including in the show itself, though Gervais has stated that Derek is not disabled, just different.

By the end of the first half hour, though, Derek will have won over the vast majority of viewers. Those who would dismiss him because of physical appearance or lack of conversational skills only need to watch him interact with the residents of the home for a bit to understand Derek’s gift. He is generous and kind, really caring about those he serves. He is earnest and determined and comfortable with who he is. In short, he’s someone we should all aspire to be.

The genius of Gervais is forcing a new perspective. He really makes the audience examine judgments and preconceived notions, turning them on their heads. DEREK promotes social acceptance and understanding of others, and does so without being preachy, on its surface just telling one specific story of an unexpectedly noble man.

Derek is surrounded by others like himself. His best mate is Dougie (Karl Pilkington), and his other friend is Kev (David Earl). Kev is creepy and hangs around the home just to argue with Dougie, as he doesn’t work there. It’s sort of a Spock/McCoy relationship, where the men enjoy their discussions, even if the casual observer would not think so. Dougie is the jack-of-all-trades at the home, who hates being annoyed, but finds pleasure in fixing things, and liked because of what he does, not how he acts.

DEREK leads one to believe that Pilkington is not an actor. While featured in Gervais’ podcasts and reality fare, this is really Karl’s acting debut. However, his limited skills are fine for the part, which Gervais has crafted very close to the real man, thus making Karl feel like he fits in the show as much as anyone else.

Rounding out the cast is Kerry Goldiman as Hannah, the manager of the home. Derek likes her a lot, and she likes him, but in a platonic way. Hannah is just as good a person as Derek, working tirelessly and far more hours than she is paid for to make the resident comfortable and happy. In this, they are kindred spirits, even if they are not a romantic pairing. If DEREK were any other series, Hannah and Derek would grow closer over time, eventually leading to a relationship, but I don’t think this show will go down that predictable path.

I wasn’t sure what to expect going into DEREK, and to be honest, I wasn’t looking forward to it much, despite loving Gervais’ other work, based on small glimpses of the lead. However, having watched two episodes, I am starting to think this is the best thing he has done to date, certainly a touch deeper and more sophisticated than his other shows, and I greatly look forward to viewing the rest of the series.

If you live in the United States, check out DEREK on Netflix now.