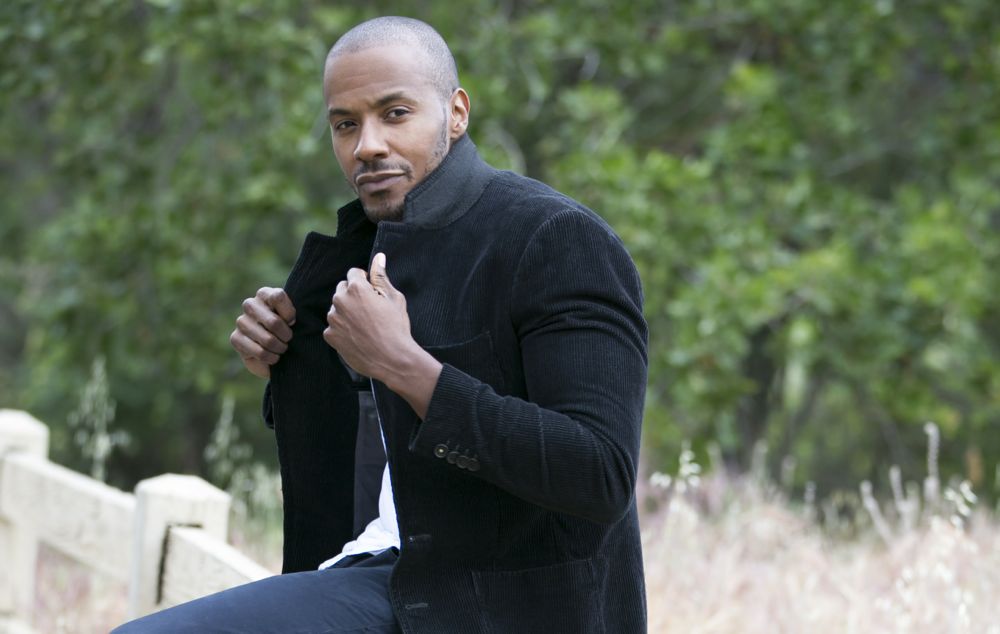 VH1’s drama series HIT THE FLOOR has never shied away from the sizzle, and one of the hottest couples on screen is the pairing of Asha (Taylour Paige) and Derek (McKinley Freeman).  No matter all the obstacles in their way, every time they are on screen, the television frame just seems to melt with all the heat between them.  With Derek at the top of his game both on and off the court, Season 3 promises to deliver all his wishes come true.

In an exclusive interview, star McKinley Freeman talked about Derek getting his priorities and life in order and his mission to win back Asha this season on HIT THE FLOOR.

So where is Derek’s head and his heart at in Season 3?
MCKINLEY:  Right now Derek is really focused on making the changes that he wants to see in his life.  He cut off all the hangers-on, the partying and the drugs and his mom.  So I think right now Derek has a singular focus.  It’s about achieving goals in all areas of his life and reaching the top both professionally and personally.  So for right now, I think you are seeing somebody that has shown in the last two seasons that he has the ability to do a lot of things and I think this season Derek is coming into an understanding of who he is and what he is capable of.  I think that is going to be exciting to watch.

He seems to have his hopes pinned on Asha, but she is not exactly available at the moment.  That seems like an unattainable goal for him.
MCKINLEY:  Shoot, not only is she not available, but she is with somebody that took somebody’s life.  So that complicates things.  But as the season progresses, Asha and Derek’s connection is undeniable — evidenced by the conversations they have had in just the first two episodes.  I think the tension is there and we are just going to have to wait and see what happens.

When you and Taylour are on screen, the screen just sizzles.  How does it feel for you both when you are in scenes together? Do you feel the chemistry?
MCKINLEY:  Absolutely.  Taylour and I get each other. So we always have a lot of fun.  Even in the most intense scenes, we’re still having fun.  But at the end of the day, we have been working together for a few years — and even from the beginning the connection we had is cool — but we have grown, just as the story has and the characters have and I think that this season, in terms of the dynamic that they share, I would expect to see more of that as well.  It’s interesting to watch.

Is Derek confident he is going to win her back?  Does he really even deserve to?  He has done some despicable things.  What is to say he deserves her?
MCKINLEY:  That’s the thing that makes Derek so interesting.  I think that despite the fact that he has done, in people’s minds, some despicable things, you cannot but help root for the guy.  That’s so much like life.  It’s a little bit more complicated than we allow ourselves to think sometimes.  But Asha is with somebody and it is just going to be a fun season.

Also hovering there is German (Jonathan McDaniel).  Does Derek have a sense that German has that darker side?
MCKINLEY:  It’s interesting.  I don’t think really know.  I definitely think that there is a “he must be doing something right because she keeps going back to him” kind of thing.  But as far as worrying about what he is capable of, I don’t think Derek is too worried about what anybody is capable of.  When you start to come to an understanding of who you are and what you mean in the world that you walk around in, I feel like Season 3 Derek is about less about what other people are doing and capable of and more singularly focused on what he is capable of and making it happen.

There is also the stuff going on with Terence (Robert Christopher Riley) and Jelena (Logan Browning) and the Devils team possible being subject to the forced-sale.  That has got to concern Derek if he is going to be signing on with the team again.
MCKINLEY:  Yeah. There’s all kinds of things going on.  They still have an owner that is in jail and there is all kinds of mix up inside the organization, and dealing with Lionel — and Jodi Lyn O’Keefe is just amazing as Lionel Kincaid — but there are lots of moving parts and how it all comes together is really exciting.

Another thing we haven’t seen much of this season so far is the Derek/Terence bromance.  Is there time for that or are the events around them too big and keeping them apart this season?
MCKINLEY:  I don’t know.  We will have to wait and see! As we have seen in the last two seasons, Derek and Terence, they have gone through battles together.  There is definitely a mutual respect and admiration that comes with people that win championships together.  But as far as the rest of it, we are going to have to wait and see how it plays out.

Is Derek getting fitted for his best man suit for Terence and Jelena’s wedding maybe?
MCKINLEY:  [Laughs]  You know what? I don’t know. You are trying to get me fired, aren’t you?!  Who knows.  We will have to see.

Since we are still early in the season, there are a lot of potential big threats out there.  There is possibly Jackson (Billy Baldwin), Oscar (Don Stark), German, and even Jelena.  She might have a few schemes up her sleeves at the moment.  Who should we be watching out for as the season goes on?
MCKINLEY:  I think if you choose one person to look out for, you are doing yourself a disservice.  I think you have to check the pulse of the show week-to-week and make a decision once the show is over because it could be everyone, it could be no one.  It is crazy.  That is one of the unique things about the show, is that there is nothing it won’t do.  The tag for the show this year is:  “Nobody is out of bounds.”  That is literally the mindset that you have to go into when watching the show.  Anything is possible.

What can we expect as far as the Devil’s Girl dances this season?
MCKINLEY:  The dances are exponentially harder. The team of dancers we have are extremely talented and they are like our secret superheroes on the show.  They are amazing.  Michael Rooney and Danny Valle, they do a really great job of coming up with really innovative things and it is going to be real fun to see.  The dancing itself is a character in the show.  It is fun to see how it evolves and from episode to episode.

Are there other projects that you are working on that you can share right now?
MCKINLEY:  There are a few things. I produced a TV show called PATRIOTTES, and it’s basically about student government at a high school and it’s pretty much PARKS AND REC meets GLEE.  And the project that I’m super excited about is this movies that I acted and produced called “Illicit.”  It is an erotic thriller that follows the premise of a married couple that are both having extramarital affairs and neither one of them know.  The cast is great.  It’s Dean Cain, Vivica Fox, David Ramsey, Essence Atkins, Vincent Ward, and myself.  So I’m really excited.  The directors and producers and I are excited about showing it. We are starting to have our industry screenings.  So everything is good.  I’m grateful to be busy.  I have a movie coming out in spring called “Hometown Hero” coming out on Pixl Channel, and I also did a show for Verizon Go90 called “Relationship Status” with Karreuche Tran and Milo Ventimiglia.  That should be coming out in the next few months as well.

To find out if Derek succeeds in recapturing the heart of Asha and it if puts him in the crosshairs in the process, be sure to tune for all new episodes of HIT THE FLOOR on Monday nights at 9:00 p.m. on VH1.