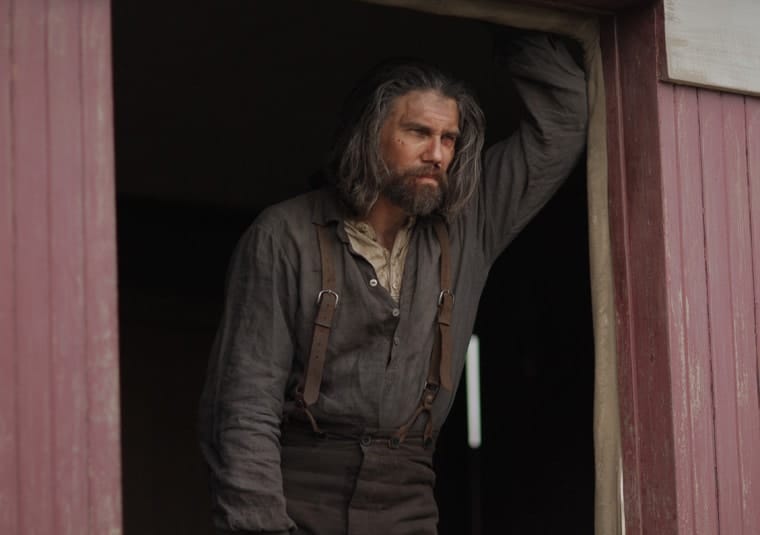 AMC’s HELL ON WHEELS rarely has an episode that is about something. That’s not to say that there is no story; the stories just don’t usually wrap up tidily in 42 minutes. One has to look at the bigger picture of the season or the series to get the context of what they just watched.

Last night’s second season premiere, “Viva La Mexico” is no different. Several months, at least, have passed since last we saw these characters. They have grown and moved on with their lives. Where they are now is informed by what they did and what happened to them in season one. “Viva La Mexico” simply sets several events in motion, rather than telling a new tale.

The anti-hero of the piece is, of course, Cullen Bohannan (Anson Mount). Bohannan is now on the run from the law, which admittedly was the case in season one, too. The difference is that now he’s living actually as an outlaw, instead of hiding in plain sight.

After learning that his family’s bodies have been dug up, Bohannan goes to an even darker place than before. He has fallen in with a train robbing gang, saving up the money he steals so he can escape to Mexico and start a life. Thing is, Bohannan has already offended a number of his cohorts, who are quite a bit less scrupulous than he. He does have one friend in the group, Doc Whitehead (Grainger Hines), who warns Bohannan to run, which he doesn’t do.

During a train robbery, Bohannan comes face to face with Elam (Common), and to save Elam’s life, Bohannan botches the robbery, which puts him even more on the outs with his comrades. It isn’t long before Bohannan ends up in army custody, awaiting an execution. There’s a bit of symmetry here, as a similar circumstance occurred in the pilot, and Bohannan managed to come out on top for the rest of the season. Let’s see if lightning can strike twice.

AMC does like to strain the definition of hero with its dark, morally ambiguous characters. Bohannan lives by a code, to be sure, but this code allows him to be a thief. It seems the only thing he doesn’t do is unjustified murder, though there is some wiggle room there, too. Still, it’s hard to judge a man living in these semi-lawless times, who has been through so much tragedy. The fact that he saves Elam should be enough to keep him likable, and it is. But can he remain likable if he keeps going down these paths?

Elam is also suffering a setback in the eyes of viewers, if not professionally. Having given up Eva (Robin McLeavy, now a main character), he has become a hired gun for Durant (Colm Meaney). Elam only does what he is paid to do, lifting not a finger in the name of righteousness, figuring this gives him more leverage with Durant. Durant appreciates this, and rewards Elam for his actions, which always must be paid for up front.

Is there any hope for Elam? Like Bohannan, Elam has a chip on his shoulder, only more so. The two men do seem to have some sort of connection, but Elam has no problem selling out Bohannan to Durant. This won’t help his reputation, as many of his co-workers now see him exactly as he is, in an unfavorable light. A man has to stand for something, and it can’t just be money. The sooner Elam realizes that, the sooner he can try to win Eva back, and find something worthwhile to do.

Durant, on the other hand, is the self-proclaimed villain of the piece, which means he’s winning. In these hard times, being rich and in power means everything. Durant has not only continued his railroad, he now has profits from leasing land, and he seems to have worn down Lily Bell (Dominique McElligott). Why does HELL ON WHEELS allow the wicked to come out on top? Was it ever really this bad, even in the wilderness?

Lily can hardly be blamed for taking up with Durant. It’s not like she is won over to his way of thinking. She is a survivor, and like her struggle to make it out of the woods after her husband’s slaughter, her new position shows her clawing through the muck just to go on. She won’t stay with Durant a minute longer than she has to. But her new station does allow her some liberties to help others, such as paying for a murdered prostitute’s funeral, proving her soul remains intact.

The souls of everyone but Lily are much less assured. Sean (Ben Esler) and Mickey (Phil Burke) are now Durant’s hired hands, selling land and collecting rent. Yes, the brothers try to behave fairly towards their tenants, and probably do a better job than most would. But when Ruth (Kasha Kropinski) has to tell them that her father can’t pay the rent, they only bend a little, and Sean even tries to leverage sex out of the deal, which, thankfully, he fails to do.

Their work may be honest, somewhat, but working for a man such as Durant limits the compassion they can have, and corrupts them a bit with their new, albeit limited, sway. This will likely turn them into bullies. This is kind of already happening as they step into The Swede’s old protectionist deal with the whorehouse. Sure, they may be offering help, but they’re also leveraging influence and wealth. Not exactly the pursuits of the noble.

What is up with Ruth? She knows her father, Reverend Cole (Tom Noonan), needs to preach to pay their rent, and yet she brings him booze. Is this to test his resolve? Is it so he will pass out and she can have carnal relations with Joseph Black Moon (Eddie Spears)? This doesn’t quite work, since Cole hears them, even if he does nothing about it. Is she trying to control her dad, help him, or just keep him out of her way? Why doesn’t she encourage Joseph to preach so that they all don’t get evicted? She is definitely the strangest character of the piece, and the one whose actions are least clear.

The bit of hope in “Viva La Mexico” is found in the most unexpected person: The Swede (Christopher Heyerdahl, promoted to series regular). The Swede has lost everything, having fallen from chief of security to garbage, toilet, and dead body collector after the tar and feather incident. And yet, alone of the characters, he remains optimistic about his future. He carries on with his work, uncomplaining, and doesn’t plot revenge, except perhaps against Bohannan, should their paths cross. He is an inspiration, and comes across as quite noble, even after the things we’ve seen him do. For the writers to accomplish this feat is quite impressive.

HELL ON WHEELS finds it within to surprise us and provide quality entertainment. The plot is a little slow moving and plodding at times. But there are some very interesting characters with depth, and it does a pretty good job by brushing off modern sensibilities in favor of the time period in which it is set. There are elements that could be improved upon, but it got a second season for a reason, and maintains the quality it delivered in season one. Most importantly, it continues to be worth watching, and fans of the first year should not be disappointed in “Viva La Mexico.”